Notice: curl_setopt(): CURLOPT_SSL_VERIFYHOST no longer accepts the value 1, value 2 will be used instead in /home/admin/web/eastrussia.ru/public_html/gtranslate/gtranslate.php on line 101
 Antarctic krill will give impetus to the agriculture of the Far East - EastRussia |
News 02 April 2020
Jewish Autonomous Region 08:49 Infectious Diseases Reconfigured Hospital in EAO Due to Coronavirus
Primorsky Krai 08:47 Fuel oil spill in Primorsky Krai half eliminated
08:44 Dmitry Makarov Appointed Director of ATB for Khabarovsk Territory and EAO


Trans-Baikal Territory 06:31 The coal project will be included in the TOP Transbaikalia
06:16 Kudrin allowed Russia's GDP to fall to the level of the 2009 crisis
06:00 "Power of Siberia" resumed work after prevention
Primorsky Krai 05:42 Snow cyclone from the Sea of ​​Japan will cover Primorye
Irkutsk Region 05:27 Two more cases of coronavirus confirmed in Irkutsk region


The Republic of Sakha (Yakutia) 05:17 Business in Yakutia will receive additional support due to coronavirus
05:08 Golikova: a series of vaccines from coronavirus in Russia will be received in May
More news
Media News2
HOME Interview 23.09.2016 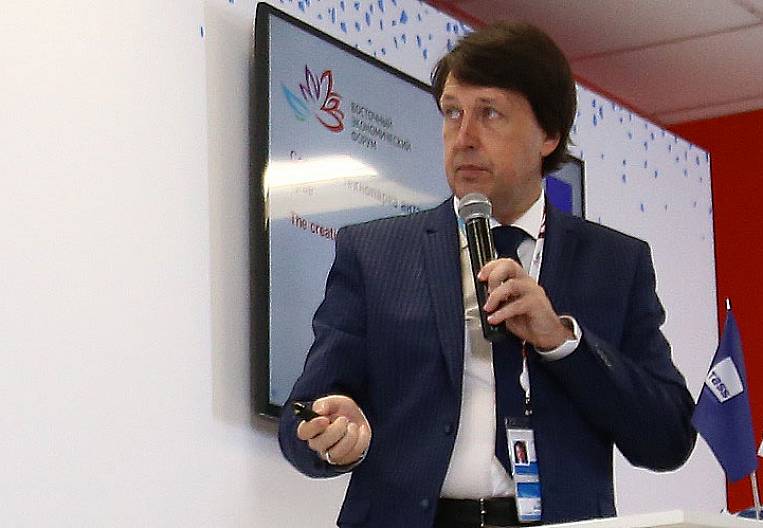 During the presentation of investment projects at the Eastern Economic Forum, the project "Creation of an Antarctic Krill Technopark in Primorsky Krai" was presented, among others, the project is interesting for its geography (fishing in Antarctic waters) and ambitions, for example, the construction of three super-trawlers and their operation on the extraction of Antarctic krill, the total amount of investments - 26 billion rubles, the need for financial resources - 6,2 billion rubles .Three super trawlers should give 2019 billion rubles in 16 year's output year at an annual catch of krill of about 450 thousand tonnes.

Oleg Bratukhin, Chairman of the Board of Directors of JSC Russian Pelagic Research Company, spoke about the main aspects of the project in an interview with EastRussia.

- In the presentation of the investment project you made a special emphasis on the “historical right” of the Russian Federation to catch Antarctic krill. What is this principle? Is it also about the water area at the other end of the globe?
- Fishing for Antarctic krill is regulated and regulated by its Antarctic Commission. Accordingly, there is an agreement on extraction. Today the declarative principle operates, since this resource is under-developed. However, when it will be fully developed - and China, Norway have serious ambitions - so when the total permissible catch that defines the Antarctic Commission will be fully chosen, then the historical principle comes into play. It is used in all conventions - how much the country has caught for the entire previous period, so much will it get this resource.

"So this is our voucher, just in case the world starts actively krill fishing?"
"It will not happen today, but I can confidently say that it will happen in the next few years." The Chinese generally consider Antarctic krill to be the only resource that can provide large volumes in the foreseeable future. Not so long ago, 2 months ago, the Chinese government announced that they plan to catch and consolidate, it is unclear how true, 2 million tons of krill. Today, the first modern Chinese ship is being built. I do not think that it will successfully catch this krill, however, they are very actively going to their goal. It will happen quickly enough. For a long time, the fishery for this resource was hampered by the lack of technology that would allow it to catch actively. The Norwegians showed these technologies, they became known. This is the only free resource available today in such volumes on the planet, others are no more. It will not be so long before it is completely clogged.

- If you talk about your project, how much time do you need and how much money will it take to build a vessel?
- The construction of the vessel takes 18 months. To start the money you need 20% for an advance payment to the shipyard. In total, we attract investments in the amount of 95 million dollars.

- How was the presentation of your investment project?
- In general, I think it's interesting enough. Our producers in the field of livestock, poultry, especially aquaculture, should assess what makes the industry in the Far East possible, if krill flour appears. They will be able to compete globally with the same Chinese factories. This is a different quality of food, fish, and meat.

- Other quality - because another base?
- Another quality - because Omega3 fatty acids, which form the basis of pharmaceutical fat and exist in krill flour, provide the effect of antibiotics, increase in the growth of broilers and so on. These are our old Soviet studies, because we caught a lot of this krill. And today these developments are confirmed by Western, Norwegian research. In China, there is a state program for the development of the Antarctic krill fishery, they have established the Antarctic krill technology park, and the result is so successful that in 2017, their technology park will be turned into 6 Antarctic krill technology parks in the areas: food products, pharmacology, medicine, feed for aquaculture, for livestock, etc.

- Accordingly, do you have a strong scientific base?
- Of course. I'm not representing an institute, but a private company, but when we talk about the Antarctic krill technopark that we plan to create here, we are counting on the scientific potential that we have in the Far East. We have a very large reserve in the field of creating various products from the sea, we will use this potential.

The amount of authorized CCAMLR catch of Antarctic krill today is 8,7 mln. Tons. This is the most significant amount of the allowed catch of all the objects of our planet that are currently being fished. By combination of catch potential and consumer properties, Antarctic krill is by far the largest and most promising free resource of world fisheries.

Historically, Russian fishermen started commercial exploitation of krill, based on data obtained by Russian scientists. By the end of the 70, the krill fishery had left the experimental phase and in 1982 reached a record level of 528 699 t, and the total catch of the USSR was 93% of the global catch. For a long time, almost to the complete cessation of domestic fishing in 1994, the share of the USSR, and later of Russia, accounted for the bulk of the catch.

Analytics Rantier remain in the law

Rosrybolovstvo is well acquainted with the problems of the fishing industry in the Far East: this may result in changes that are planned to be made to the Law on Fisheries

Interview Peter Fradkov: rockets - they know, but shampoos - no