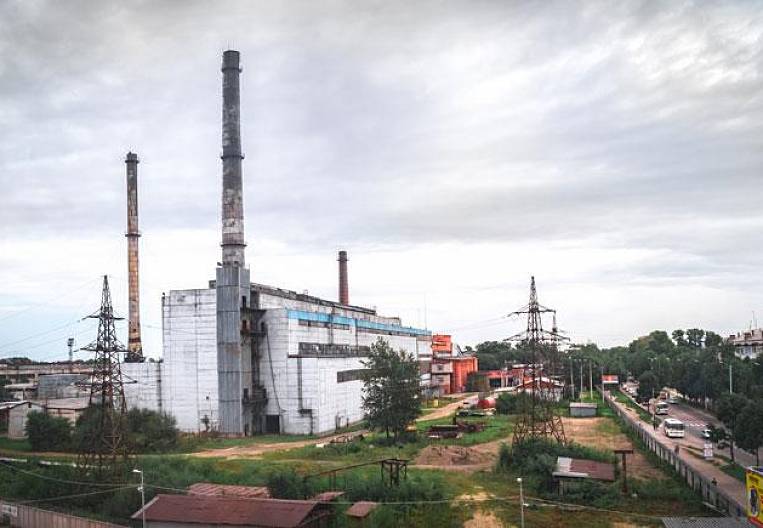 And it all started with energy trains, on the railway run, consisting of several wagon-boilers, a turbine car, a switchgear car and an auxiliary equipment car. In the pre-war years, as well as during the Great Patriotic War, they gave the city electricity. In addition, each company had its own locomobiles and diesel engines ...

Discussion of the construction of a CHP plant in Birobidzhan began in the thirties. The document was approved in the project department of the "Communal Energy Building" 27 August 1935. The new CHPP was to appear on the left bank of the Bira River, where active construction of residential buildings was underway, factories and factories were being built. But two years later, in October 1937, the preparatory work was suspended. Local authorities demanded to develop measures to prevent the site of the CHP from flooding in case of possible floods of the Bira River. Recycling and re-confirmation of the project took several years. Due to the lack of funding, the construction was only returned in July 1951, when "Kommunenergoproekt" issued a new project assignment. Three years later, the construction of the Birobidzhan CHPP was resumed, headed by Yefim Zusevich Khodor, later appointed to the TPP as chief engineer.

In June 1958, the existence of the new enterprise was approved by the decision of the Ministry of Energy of the USSR, and in October the first boiler and turbine unit were commissioned. This important event was the beginning of great energy, a turning point in the development of the city.

Meanwhile, Birobidzhan continued to actively build up, there were large industrial enterprises that demanded an increase in heat supply. Therefore, the project of the Moscow Institute "Giprokommunenergo" started construction of four boilers of the type BKZ-75 (boilers "issued" 75 tons of steam per hour with an air pressure of 13 for heating purposes). This was the first stage of expansion of the CHPP, which lasted from 1967 to 1975 year. Construction was carried out almost around the clock due to the equity participation of consumers of thermal energy. One of the directors of the CHP, Nikolai Mikhailovich Tokolenko, who worked all his life at this enterprise, recalls: "The Dalenergostroy trust was building very fast. Questions arose mass. And for the supply of equipment, and for project solutions. The day was spent on coordinating the changes, in the evening they were received by the builders, and in the morning it was necessary to solve other issues. This very stressful period ended with the fact that in 1972 the start-up complex of boiler units No. 4 and No. 5 with the main and auxiliary equipment was commissioned. "

The next expansion project of the CHPP was developed in Irkutsk, in the Siberian Branch of the Institute VNIIPIE "Energoprom". According to it, a total of seven boilers were to be generated at the CHPP. The first of them - boiler № 8 was put into operation in 1980 year. This allowed to close more than 30 boiler houses in the city, to organize hot water supply. By this time on the balance of the CHPP there were already 9,5 kilometers of main heating networks. The oldest boilers TS-20 were dismantled. Boiler unit №9 put into operation in 1985 year, № 10 - in 1987-m.

During these years, a young specialist, and now the head of the production and technical department, Andrey Butin, began working at the CHP:
- I came to 1986 year, right after the institute, I was given a hostel, worked as a master in the boiler shop, the team we had was just wonderful. These were the years when there were 80 young people at the thermal power station. They came in different ways, who from the army, who after school. This was the policy of the director Mikhail Alexeevich Yanovsky, he even talked with the leadership of Khabarovskenergo, to specifically take young professionals. And then, together with us, war veterans and workers of the rear worked, they were all in order, in good health. Now there are only two of them left, but they are good fellows, cheerfully feel, - remembers Andrei Viktorovich. - We had a very well developed sport at the thermal power station, there was a strong team, we constantly brought cups and awards from various competitions.

During these years the station worked at the limit of its capabilities. Complexities were added by Raichikhinsky coal, which had a high humidity. In winter, it frosted, hanging in the bunkers of the boilers. To eliminate the congestion of coal at the CHP, assistants were sent from factories, factories, from military units.

It was not possible to expand the CHP further, there was no physical place in the center of the city. The site for the new CHP plant was selected in the western region of Birobidzhan, behind the future industrial zone, where construction of XPS-100 plants, wooden structures, a factory of felt footwear, development of a greenhouse was planned. The northern boiler house was a whole complex of high-tech facilities, but the construction was stopped on readiness at 60 percent, when in 1996 the funding ceased. Some of the objects were dismantled, the boiler house itself was preserved.

There were very interesting events in the life of the station. For example, at the beginning of the 1990-ies, they started breeding fish. Sverdlovskiy SODVI carried out a plant design with a capacity of up to 5 tone per year with a closed cycle of water supply. We collected it in 1990 year on the basis of old chemical water treatment. And then they got into the taste: in 1993, a fish breeding workshop with a closed cycle of water supply began to work at 15 tons already. Sazanov and carp sold to their employees and residents of the city. Because of the high cost of fish feed, losses were incurred, therefore, when the Amurskaya CHP plant was put into fish processing plant at 400 tons per year, this was closed.

Of the current plans, the option of building a new boiler house in the Second Birobidzhan is under consideration. But so far this is only a prospect for the future. According to the management of the company the main task of today is to ensure the stable operation of the existing equipment so that the coming heating season the city was reliably provided with heat and hot water.
We hope that the CHP will not fail and will serve the Birobidzhans for many years to come. In the meantime, we congratulate all employees of the CHP on the anniversary of their enterprise. Good luck and success in your hard work!
Tags: Power engineering infrastructure building development Birobidzhan EVO