Notice: curl_setopt(): CURLOPT_SSL_VERIFYHOST no longer accepts the value 1, value 2 will be used instead in /home/admin/web/eastrussia.ru/public_html/gtranslate/gtranslate.php on line 101
 Architect Valentin Anikeev on the agglomeration and prospects for Vladivostok's urban development - EastRussia | News Primorye Territory
News February 26 2020
Amur Region 10:06 Amur Region will receive 350 million rubles for housing for flood victims
09:38 VTsIOM: 66% of Russians plan to vote on the Constitution
Primorsky Krai 09:00 A new municipal district will appear in Primorye


Jewish Autonomous Region 03:47 The authorities of the EAO will support the development of the world's largest deposits of brucite
Khabarovsk Krai 03:24 The mayor of Khabarovsk has a business manager
More news
Media News2
HOME Regions Primorsky Krai 28.03.2018

Valentin Anikeev incomplete 85 years, most of his life he devoted to the urban development of the Far East. He began his career as a nuclear engineer, for several years he was an industrial designer and almost in 40 years he became the chief architect of the Primorsky Territory. Until last year, he taught at the Department of Architecture and Urban Engineering School of Far Eastern State University. Professor, Corresponding Member of the Russian Academy of Architecture and Construction Sciences, Honored Builder of Russia, Honorary Architect of Russia told EastRussia for the project "Unsuccessful" about his professional path, scientific research and his vision of the development of Vladivostok. 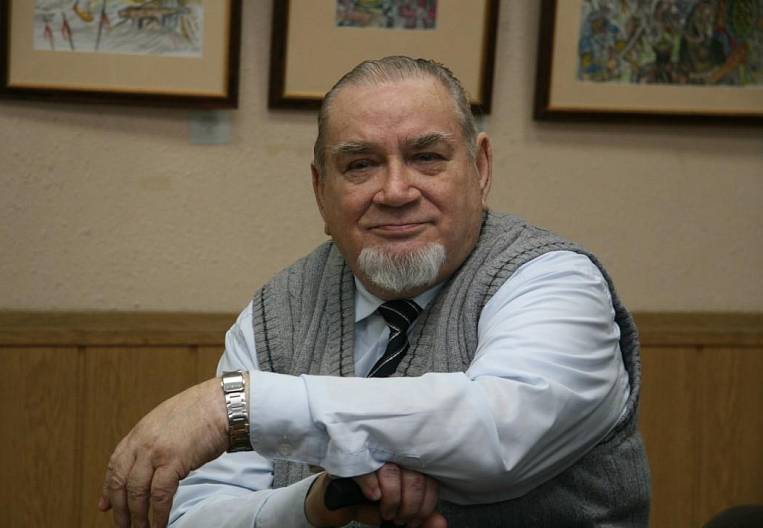 Photo: from personal archive Valentina Anikeeva
- I was born in the Stalingrad region. He was an ordinary village boy, who first saw the tram, having come to take the entrance examinations to Moscow, - says Valentin Vasilievich. - In the Moscow Institute of Water Engineers, he received a specialty in hydraulic engineering for the construction of river nodes and hydroelectric power stations.

After the release of Anikeeva sent to the Ministry of SredneMash USSR - the ministry, "forging the nuclear shield" of the country. At the institute "Lengiprostroy" (now - VNIPIET Rosatom) he was to design nuclear plants in the Urals and Siberia. The current youth may not understand, but then many young engineers tried to get to work not in a "warm place", but on the advanced front of science and technology. So Anikeev asked to send him to one of the Siberian branches of the institute, especially since in Leningrad he and his wife could only offer a hostel.

- In the closed city of Tomsk-7 (now - Seversk), I worked for three years, in 1959 I was transferred to the same city of Krasnoyarsk-26 (now - Zheleznogorsk), "Anikeev said. - There in 26 years I became the chief engineer of the project of a huge underground mining and chemical combine. The work was very interesting. My reactor at this plant later received a closed state award. But nuclear technology and technology were still poorly understood, we did not seriously think about our safety, as a result, at the start-up of the reactors, I picked up radiation. Doctors recommended to go to the mountains or to the sea. My elder brother served in Vladivostok, and we arrived here in 1962.

Anikeeva was recruited to the Design Institute No. 4 of the Primorsky Council of National Economy. In 1963, it was combined with DVNIIS and renamed the Far East PromstroiNIIproekt, where Valentin Vasilievich worked as the chief engineer of projects and the chief engineer of the institute for more than 10 years. He designed blocks of hulls at shipyards in Slavyanka and Nakhodka, factories of efficiency and concrete in Nakhodka, Dalnegorsk and Petropavlovsk-Kamchatsky, developed master plans for industrial complexes and ordered the development of industrial zones in Nakhodka, Vladivostok, Ussuriisk, Spassk-Dalniy, Yuzhno-Sakhalinsk and Petropavlovsk-Kamchatsky.

- A characteristic stroke, - says Anikeev, - I was still a young guy, although I already worked as the chief engineer of PromstroiNIIproekt. Suddenly, I was summoned to myself by the first secretary of the Primorsky Territorial Committee of the CPSU, Viktor Pavlovich Lomakin. He bluntly admitted that he was not strong in designing industrial facilities, and asked him to advise him on these issues. The head of this level (above the current governors!) Did not find it shameful to seek professional advice even for a young engineer. This act caused me even greater respect for this real leader. It would be nice if the current government does not neglect the advice of competent consultants.

And in 1972, the regional party sent Valentin Vasilyevich to the post of chief of the department for construction and architecture of the Primorsky Territory Executive Committee, the chief architect of the region.

"I, the industrial designer, had nothing to do with architecture," he says. "But he considered it his duty to justify the Party's trust." I had to master a new profession - architecture and town planning, to study for 4 years in correspondence graduate school, to defend my Ph.D. thesis in Moscow in order to become a level with the architects.

During the years of work, Anikeev was the co-author of the draft master plans for Vladivostok, Nakhodka, the Big Stone and other towns and settlements of Primorye. He was awarded two orders and three medals of the USSR for the leadership of the architecture and town planning bodies of the Primorsky and Khabarovsk Territories and the work of the Deputy Plenipotentiary of the USSR State Planning Committee for the Far East. He awarded him two medals and diplomas for scientific and design work. For his great contribution to the development of Primorye, he was awarded the title Honorary Resident of the Primorsky Territory.

In the run-up to the APEC-2012 summit, Anikeev, while a FEFU professor, worked part-time at the Moscow Institute "Giprogor" as a scientific consultant and performer. He was engaged in justifying the choice of a place for the business center of the APEC-2012 summit and the transport scheme for its maintenance. Back in 1999, he proposed to build a second exit ramp "Patroclus - Sedanka - De-Freeze - Novy settlement", but then the authorities of the city and the region thought it was a fantasy. But in preparation for the summit it was realized.

Part of the developments of Valentin Vasilievich have not lost relevance until now. Among them is the construction of a low-water bridge across the Golden Horn Bay in the city center, a bridge across the Eastern Bosporus Strait from the Shkot Peninsula to the Russian Island, tram and trolleybus lines, and a number of other facilities. About them you can find out in his monograph "Trunks and bridges of Vladivostok", electronic edition of it was published at the end of 2017 year. Also Anikeev, together with professor of the Department of Architecture and Urban Planning of the Engineering School of the FEFU, Victor Alexandrovich Obertas, published a monograph "General plans of Vladivostok. History, problems, solutions. " In its continuation Anikeev wrote monographs "Vladivostok entered the XXI century. Town-planning aspects of the development of the city "and, as already mentioned," Highways and bridges of Vladivostok. Ideas and solutions. " They detail the stages of the development of the city.

- I have high hopes for our new leaders, Vitaly Verkeenko and Andrei Tarasenko. They very vigorously undertook the development of Vladivostok. But in order to competently engage in urban development, we need professional knowledge and experience, "Anikeev said. - My ideas and proposals, described in the monographs mentioned above, have technical and economic justifications, they are based on the history of the city development. I do not claim that it is absolute, but studying them is undoubtedly useful for understanding the essence of Vladivostok's urban development problems. The transfer of the commercial port and tank farms, which are now being discussed again, have been worked out by me several times. By the way, the output of the tank farm beyond the city limits was planned to be made from 1939 a year ago. But we must understand that the competent implementation of these projects is expensive and without government support is hardly possible.

The development of Vladivostok, located on the Murav'ev-Amur peninsula, is extremely difficult. In addition to the fact that it has a dismembered structure of the plan, the city surrounds the sea on three sides, with the fourth it is locked by the sanitary-protection zones of the two-drink reservoirs - Pionersky and Bogatinsky. There is almost nowhere to develop the city within its borders. Therefore, back in 1993, Anikeev and his colleagues worked on the project "Big Vladivostok" with a population of more than a million people around the current agglomeration.

"The geopolitical and strategic position of Vladivostok at the junction of Russia and the Asia-Pacific countries is extremely important," says Valentin Vasilievich. - Now the city is positioned as the center of international cooperation of Russia with the Asia-Pacific region. But for these new functions of the existing territorial-aquatorial potential of the city is clearly not enough. The project, which we developed, envisaged the inclusion of the city of Artyom, Nadezhdinsky and part of the Shkotovsky District in Vladivostok. And this is unlikely to escape. Now the authorities are pushing the idea to move the city center to the First River region to the site of the oil depot. This is more than controversial. If we are to create a new center of the future city, somewhere in the vicinity of the village of Novy. I, as a city planner, have a dream - the project "Big Vladivostok" - the Far Eastern capital of Russia. I would like to see how it will be realized.
Tags: Vladivostok building architecture agglomeration planning Far East Unconvicted

Nelly Miz's book "Vladivostok: walks into the past" invites you to an exciting historical journey through the streets, squares, houses, fates and characters of the seaside capital