Notice: curl_setopt(): CURLOPT_SSL_VERIFYHOST no longer accepts the value 1, value 2 will be used instead in /home/admin/web/eastrussia.ru/public_html/gtranslate/gtranslate.php on line 101
 The second stage of the Kimkano-Sutarsky Combine will be provided with raw materials only at the expense of the EAO - EastRussia |
News February 19 2020
Primorsky Krai 00:14 New flight will connect Vladivostok and Tokyo
February 18 2020
23:52 Sberbank customers donate several billion to charity
The Republic of Buryatia 18:22 A new walking route along Baikal will be launched in Buryatia

GOK acquires the completeness of the name 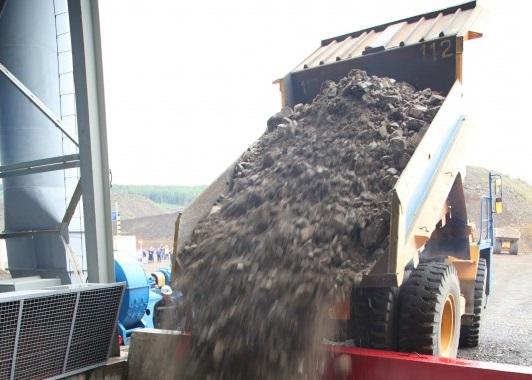 Photo: petropavlovsk-io.ru
In 2018, the development of the Sutarsky iron ore deposit will begin in the Jewish Autonomous Region. The project is presented as the second stage of construction of the Kimkano-Sutarsky GOK, which will be invested 1,6 billion rubles to 2022 year. Currently, nearly 30 billion rubles of private funds have already been invested in the GOK. The combine is created on the basis of two deposits of ferruginous quartzites - Kimkansky and Sutarsky (Obluchensky area). Construction began in 2007 year. While the combine reached the level of 75% of the designed capacity - almost 200 thousand tons of products per month. 100%, or 3,2 million tons per year, should be achieved by the end of 2018, then capacity will be increased to 4,5 million tons per year, the company said.

- The Kimkan and Sutarskoye deposits are being mastered consistently. Involving the resources of the Sutarskoye field is, in fact, the second phase of the construction and development of the GOK (the next stage, in the longer term, will involve the resources of the Kostenginskoye field with balance reserves of 163 million tons). Sutar is currently undergoing exploration work, infrastructure is being designed. There will be built a quarry, a primary enrichment factory, an administrative-household part is equipped, "says Yury Makarov, general director of Petropavlovsk-Cherkasy Metallurgy. - On Sutara there will be a primary crushing of ore, then it will be taken to the concentrating factory on Kimkan. We involve a resource base and continue to produce concentrate where there are already enrichment capacities and the necessary transport infrastructure. In the future, our railway trains will go to the Transsib without any intermediaries, directly to consumers. Involving Sutara will give an almost twofold increase in the production of iron ore concentrate.


EastRussia Help. LLC "Kimkano-Sutarsky GOK" through the Cypriot offshore company Kapicius Services Ltd. controls the IRC Group - a joint venture of the mining alliance Petropavlovsk (31%) and the Chinese General Nice and Tiger Capital. GOK is the only active IRC asset. Financing for its construction was brought under guarantees for $ 234 million Petropavlovsk, as well as through trades on the stock exchange in Hong Kong. According to RAS financials, for the 2016 year, GOK showed only 709,6 million rubles. revenue, while the company's net profit amounted to 1,47 billion rubles. due to the received 8,5 billion rubles. "other income". According to the company, the Sutarskoye and Kimkanskoe deposits are the most promising iron ore objects in the Malo-Khingan ore district. The balance reserves of the Kimkan deposit are estimated at 134 million tons of ore, off-balance reserves of 91 million tons. At Sutary balance stocks - more than 491,2 million tons, off-balance reserves - 70,6 million tons.

Experts recognize that the GOK project is one of the key for the economy of the Jewish Autonomous Region. By data Minvostokrazvitiya, autonomy in 2017 became the leader in the growth of industrial production in the Far Eastern Federal District due to the effect of the Kimkano-Sutarsky GOK, introduced last year. "The basis of the mining industry in the economy of the Jewish Autonomous Region for the near and long-term perspective (in the 21st century) will be two large mining enterprises: the Teploozersky Cement Plant and the Kimkano-Sutarsk Mining and Processing Combine," materials of the Institute for Complex Analysis of Regional Problems of the Far East Branch of the Russian Academy of Sciences. The plant itself adds that the existing reserves of the Sutarskoye field should be sufficient for at least 80 years of operation.

However, experts point out: the rich reserves are not the main thing, today it is necessary to bet the modern enterprise.

- I always have mixed feelings when I hear about the development of another field. On the one hand, this means strengthening the economy of the region through the development of new resources. On the other hand, it says that we continue to sit on the resource needle, "says Pavel Samorodsky, Ph.D. in geological and mineralogical sciences, Associate Professor of the Geology and Methods of Exploration Department at the Institute of Mining Geology and Geotechnology of SFU. - I hope that in this case the matter will not be limited only to the extraction of ore, but its deep processing by the most modern technologies and manufacturing of products from it will be made, and the products will already be exported, and not actually ore. In our country, extensive experience in the development of similar types of fields (their feature is that the ore there is relatively poor in iron content, but the reserves themselves are large) and enrichment of such ores. But it is high time to reach a new level.

Kimkano-Sutarsky GOK may in the future begin to produce straight-recovered iron - this direction is considered one of the most promising for the effective development of world metallurgy. But the timing and the possibility of implementing the project depend on how soon the "Siberia Power" gas pipeline will pass through the Jewish Autonomous Region and when a roadway between BAM and Transsib will be built. Without this, the implementation of some of the plans is either unreasonably expensive, or unjustifiably complex. In addition, to implement the project it would be nice to put into operation the Garinskoye field in the Amur region. The license belongs to the company from the year 2007 and, according to the initial plans of the IRC, it was Garinskoye which was to provide the raw material base for the second stage of the GOK in the EAO.

"It was originally planned after Kimkan to develop the Garinsky deposit in the Amur region, it should have become the second line of the GOK," Yuri Makarov said. "However, it was" replaced "by Sutarsky, since the construction of a railway between the Trans-Siberian Railway and the Baikal-Amur Mainline, as envisaged by the Strategy for the Development of Railway Transport until 2030, has not yet begun. A Gar is located equidistant from both BAM and Transsib. Because of the distance from the transport routes and infrastructure facilities, its development has not begun yet, although it was openly in the middle of the twentieth century, the whole complex of geological exploration works was carried out.
Tags: metallurgy Extraction ore GOK concentrate EAO Petropavlovsk

Media News2
See also:
string (22) "Standard"
Interview "We will reach peak power by the end of the year"

Yuri Makarov: "The Far East is a promising market for the development of ferrous metallurgy"

Interview Alexander Levintal: "We have already received proposals for TOP"

EAO sums up the results of the Eastern Economic Forum