Notice: curl_setopt(): CURLOPT_SSL_VERIFYHOST no longer accepts the value 1, value 2 will be used instead in /home/admin/web/eastrussia.ru/public_html/gtranslate/gtranslate.php on line 101
 EastRussia visited the construction site of the first four-star plus hotel in Petropavlovsk-Kamchatsky - EastRussia | News Kamchatka Krai
News January 27 2020
Magadan region 16:31 The new Mi-8 helicopter received the Magadan region
Sakhalin Region 16:20 Former bribe convicted former head of Korsakov on Sakhalin
16:09 Ministry of East Development will evaluate the effectiveness of the Far Eastern governors

Kamchatka is being prepared for cruise ships and charter flights 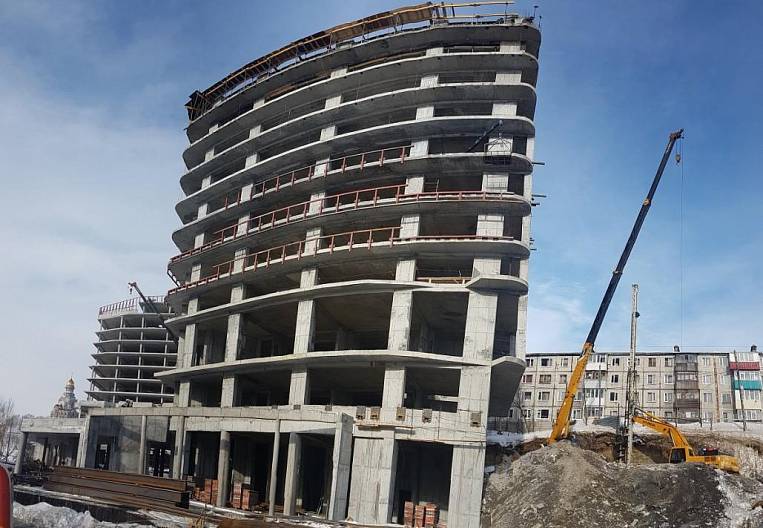 Photo: Dmitry Shcherbakov, kamgov.ru
The first stage of the hotel and entertainment complex along Leningradskaya Street in Petropavlovsk-Kamchatsky, started just over a year ago, will be commissioned not earlier than 2019 year, although the passport of the object was originally designated September 2018. This was announced today by EastRussia project manager Dmitry Kotov.

"We have almost finished all the load-bearing structures, we have only three floors to complete one of the" towers. "From the middle of spring, the delivery of facade structures and roofing will start, in the summer or closer to autumn, internal work will begin. , but the date is being specified.In connection with our remoteness and complexity of staffing, the terms are partially transferred, partially specified, "- he explained. Last summer, the customer-building company expected the hotel tower to be completed in March of 2019, and in the winter, installation of facades from a supplier from Shanghai will begin.

EastRussia Help. Kamchatsky LLC "New House", acting as the customer of construction, launched the project of a hotel and entertainment complex in 2016. 70% of the company belongs to Igor Redkin - local entrepreneur, owner of 49,5% LLC "Airline Vityaz-Aero" - the main private helicopter carrier of Kamchatka. In January 2017, the company received the status of a resident of the free port of Vladivostok.

Total private investment in the project is estimated at 2 billion rubles, the payback period is 8 years. The complex of variable number of storeys (12-15 floors) will include a four-star plus hotel hotel tower for 188 rooms (300 guests), a concert hall, a conference hall for 600 seats, a fitness center with an 25-meter full-size a swimming pool, a SPA center and a Korean-style bath, office facilities and various entertainment facilities.

"In terms of capacity and service level, this hotel will be the first in Petropavlovsk-Kamchatsky and, probably, the only one." The complex will be able to accept whole "charters" of tourists, first of all it will allow developing charter programs with China, Japan and South Korea, which is very important, the same level of services.This is now the main problem of the infrastructure of Kamchatka: a charter flight flies, and existing hotels can not accommodate all tourists with one level of comfort, than guests are often unhappy. company-investor in the property of a private helicopter company that provides all services for tourists to inspect the beauty of the peninsula, "- explained Dmitry Kotov.

The complex will be erected on the site with a beautiful view at the waterfront of Kultuchny Lake, where, from 2006 year earlier, more than once tried to build a hotel. The appearance of the hotel was invented by Levon Ayrapetov, a Moscow architect. The building is supposed to make it look like a volcano, with facades of gray crushed aluminum and a stainless steel stub, and the conference room will visually "flow" from the roof downwards, depicting lava. The office building will be glazed using a special white spray and have an uneven shape - like an ice block.

The cost of living in an unusual hotel, said Dmitry Kotov, will be close to the average market: "The plan is not to get out of the services market, although the price will be determined closer to opening." The hotel is planned to be given to the management of a federal operator, but not an international network, since the latter, as the investor thought, is not very profitable.

"We sell only the brand, and all the rest - numerous conditions and additional investments, which we estimate as impractical, Kamchatka is not saturated with such objects, and the world brand itself will not give much in. We do not have such competition as in big cities, and the system of attracting tourists is a bit different, "explained Dmitry Kotov.

The project of the "New Home", we recall, has the status of a resident of the WSP and claims to receive state support measures - for example, when connecting to engineering networks, and later - for tax benefits. "We will also use preferences in the customs line, which make it possible to establish a regime of a free customs zone.There already everything has been prepared, cameras have been installed, some of the goods will be imported duty-free, although for the time being there are difficulties: federal legislation was not elaborated in detail, and small it was very difficult for the residents of St. Petersburg to use this privilege, but soon everything should be earned, "said Dmitry Kotov.

Head of the Agency for Tourism and External Relations of the Kamchatka Territory Alena Stratonova believes that the hotel complex "New House" is an interesting project in terms of tourism development, since this is the very center of the city. According to her, now the government of the region has begun a lot of work on the development of this particular area, primarily the city embankment, including the modernization of engineering networks - the project will qualify for federal co-financing through Rosturizm.

"The investor of the New House plans to equip the park and the Pavlin project for the construction of the ethnoderevelopment is nearby, and the reconstruction of the stairways and infrastructure of the nearby Nikolskaya Hill is going to organize a good tourist zone in the center of Petropavlovsk-Kamchatsky, which is very necessary from the point of view view of the development of cruise tourism, "- emphasizes Ms. Stratonova.

As the head of the tourism agency explains, cruise ships enter the capital of Kamchatka, as a rule, for a short time, so their passengers need a furnished embankment and infrastructure in the most attractive place - the city center: "A separate very interesting project is the possible arrangement of a runway near with the hotel.This would solve the issue not only with the landing of ships of sanaviation, but also with the movement of tourist traffic.Now the road from the city center to the helipad takes up to an hour, which makes the flight to important irodnyh objects of Kamchatka for passengers on cruise ships calling at a few hours, inaccessible. "

In addition, measures to support the sale of package tours at reduced prices for the off-season, when the hotel complex of Kamchatka is under-loaded, are well connected with the appearance of large high-class hotels, she adds. "In the region there is always something to do for tourists: sea walks, mountain-skiing bases, hot springs, fishing are all year-round entertainment, but hotels need an even load per year - at least on average by 60% .In the peak summer season, "- sums up Alain Stratonova.
Tags: tourism building Kamchatka гостиницы infrastructure transport investments availability