Notice: curl_setopt(): CURLOPT_SSL_VERIFYHOST no longer accepts the value 1, value 2 will be used instead in /home/admin/web/eastrussia.ru/public_html/gtranslate/gtranslate.php on line 101
 EXPO in Harbin: Chinese interest - EastRussia |
News 02 April 2020
19:16 Putin extended the day off until April 30
15:06 Russia will spend 500 million on the export of its citizens from abroad
14:41 Announcement: Roscongress and EY will give business survival instructions 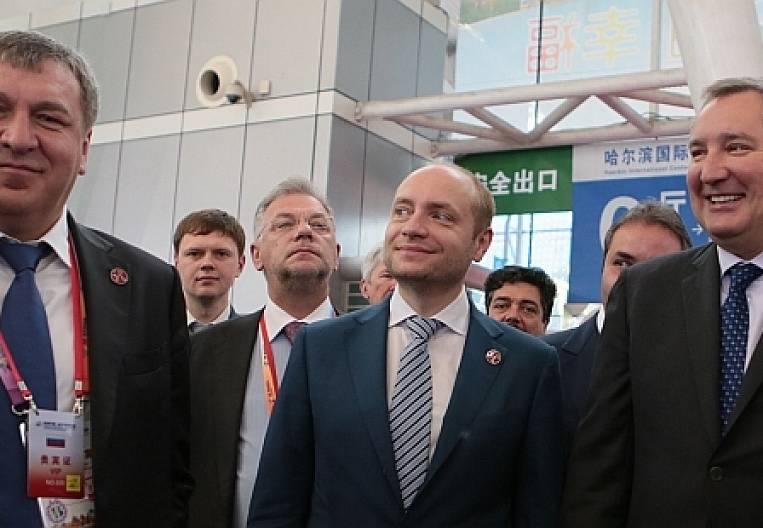 EXPO in Harbin is a large-scale platform designed to demonstrate competitive products and industrial and technical developments of Russian industrial companies and institutions, present industrial and investment potential of Russian regions, develop bilateral cooperation projects and establish new contacts. The tone of the event was set by the President of the Russian Federation Vladimir Putin, saying earlier that "it is necessary to increase investment cooperation. The Russian-Chinese EXPO will be held this summer in Harbin to solve this problem. "

"Russia sets the task of increasing the trade turnover between China and Russia to 2020 billion dollars by the year of 200. We consider this figure ambitious, but absolutely achievable," Denis Manturov, the Minister of Industry and Trade of the Russian Federation, said at the exhibition.

Meanwhile, EXPO in China - an event for our country is not new. It was created on the basis of the Harbin International Trade and Economic Fair, held in 1990-2013. Last year, the two countries signed foreign trade contracts worth 8,69 billion dollars, which amounted to 79% of the total amount of contracts signed at the fair. After such a crushing success, the fair was renamed the "Russian-Chinese Expo", choosing the slogan "New Platform - New Opportunities" as the motto of this year.

There were indeed many opportunities for both sides. At the opening ceremony of the Russian-Chinese exposition, the Chinese side presented such projects as the Lyudinovo Special Economic Zone of Industrial Production, the Amazar Pulp and Paper Mill, the ASTRAROSSA Industrial Design and Innovation Center, and the construction of a bridge across the river. Amur in the vicinity of the cities of Blagoveshchensk and Heihe, the project of integrated development of Khabarovsk airport "New", Technopark "Yakutia" and many others. Own projects were presented to the companies Rostekhnologii, Beijing Perfect World Co., Energy Alliance Amur Energo-Stroy Alliance, Research Institute of Rolling Stock Qingdao Sifang.

Within the framework of the business program of the First Russian-Chinese Expo in Harbin, along with round tables and business meetings, the Days of Russian Regions were held. The presentations were held by the 20 regions, but the Far Easterners made themselves the loudest.

According to Svetlana Ivanova, Deputy Minister of Regional Development of the Russian Federation, there is nothing surprising in the fact that the presentations of the Russian regions-neighbors have received the greatest interest.

"These subjects of the Russian Federation have a long common border with the Chinese provinces, they have accumulated a significant positive experience of cooperation in various areas of cooperation and, most importantly, in my opinion, the leaders of these regions have the political will to fully promote the attraction of Chinese investments to the economies of their regions," - She noted.

The investment potential of the Khabarovsk Territory was presented by the Deputy Chairman of the Government of the region - the Minister of Economic Development and Foreign Relations of the Territory Viktor Kalashnikov. V.Kalashnikov said that four levels of development of cooperation with Chinese business were noted in the region: participation of Chinese companies in cluster projects; Attraction of investors to projects of integrated development, including with a special regime of preferences; Cooperation in relatively small but specific investment projects; Development of trade contacts. The Krai Government has developed a number of project proposals: the construction of a pulp and paper mill in the city of Amursk; Construction of a plant for the production of 150 thousand cubic meters. M. Of particle boards per year; Production of lumber and components for wooden housing construction; Tourist cruise project "Amur-Father". The development of complex projects for the creation of an aviation hub in Khabarovsk, a fishing industry complex within the framework of the Vanino-Sovgavan transport-industrial hub, an equestrian park on the Great Ussuri island, is promising for the region.

One of the leaders in attracting Chinese investment may well be the Primorsky Territory. The Governor of Primorye, Vladimir Miklushevsky, said that ties with China are expanding in all sectors of the economy: agriculture, transport, construction, energy, tourism. Trade turnover with the People's Republic of China is constantly increasing, its share in the total foreign trade turnover of the region is from 50% to 60% annually. The share of investments of Chinese partners has increased over 2013 year more than 2 times. Today it is about 73 million dollars. In the province there are more than 300 organizations with investments of the PRC, and this is almost half of the total number of enterprises operating in Primorye with foreign investments. One of the most promising areas of joint cooperation is the transport and logistics complex. Primorsky Krai is actively modernizing the international transport transports "Primorye-1" and "Primorye-2", which pass through the northeastern provinces of China. Other large-scale transport and logistics projects are also being realized: the intermodal Astafiev Terminal in Nakhodka, the transport and logistics center Sukhoi Port in the Artemovsky urban district. In order to shorten the transit of goods across the border, the Vladivostok-Nakhodka-Vostochny port road is being built.

In the plans for the development of road infrastructure - a lot of projects. "The full functioning of all transport infrastructure will significantly shorten the time of transportation of goods to Russian regions, including from the People's Republic of China. This, of course, will have a positive effect on the final price of products for the consumer, "Miklushevsky stressed. Particular attention was paid to the creation of territories for advanced development in Primorsky Krai, as well as to the development of the tourist direction in the region.

The head of the regional department of agricultural policy and nature management of the Chukotka Autonomous Okrug, Leonid Nikolaev, said that the EXPO drew attention to projects in the agro-industrial and tourist industries.

"The delegates of Chukotka presented the opportunities of the region in the sphere of reindeer husbandry and sea mammal hunting to the participants of the EXPO, as well as the organization of tourist routes to Chukotka for the people of the People's Republic of China," he said. Investors' interest was also caused by projects related to the development of the Bering coal basin. The project is being implemented as a commercial one, the investor in the Bering Sea basin development was the Russian Direct Investment Fund, which invested about 15 million dollars from the necessary 48.

Among the promising Russian-Chinese projects, the Governor of the Jewish Autonomous Region Alexander Vinnikov called the creation of a mining and metallurgical cluster in the Amur Region, the construction of a railway bridge across the river. Amur near the settlements of Nizhneleninskoye of the Russian Federation and Tongjiang of the People's Republic of China, the reconstruction of the Birobidzhan-Leninskoye railway line with access to the railway bridge crossing under construction, the establishment of enterprises for deep timber processing and lumber production in the village. Nizhneleninskoe Leninsky district and with. Pashkovo Obluchensky district.

A.Vinnikov stressed that the implementation of the joint Russian-Chinese program for the development of forest resources has already enabled the attraction of large Chinese investors to the region. In addition, enterprises with Chinese investments successfully operate a number of industries of the Jewish Autonomous Region, are engaged in the extraction of mineral resources, harvesting and processing of timber, construction of housing, production of agricultural products, construction materials, furniture, and services. Priorities for further cooperation are reflected in the Agreement signed by the region's leadership and the province of Heilongjiang.

The pavilion of Yakutia, where traditional motifs and modern technologies were combined, received a diploma for the best design project of an exhibition stand. By the way, already on the second day, representatives of business circles of the Republic of Sakha (Yakutia) concluded 10 contracts with Chinese partners.

As for high-profile contracts in the Far East, the Sakhalin Region and Heilundjiang Province signed an agreement on twin-town relations at the EXPO. The government of the Sakhalin Oblast is interested in many-sided cooperation in the deep processing of natural resources with which the island land is rich. The agreement was signed by Ekaterina Vladimirovna Kotova, Minister of Investments and External Relations from the Sakhalin Region, from the province’s side - Saibinha, Director of the Forestry Department It is planned to sign an agreement between the Heilundzyan Forestry Department and the Ministry of Investment and External Relations of the Sakhalin Oblast in the implementation of timber industry projects.

FESCO Company (Suma Group) and Heiludzyan Grain Company signed an agreement on cooperation. This agreement provides for cooperation within the framework of the project implemented in the Far East - "The Great Port of Zarubino". According to the presentation of the project presented by Andrei Zagorsky, the head of the construction of the "Big Port of Zarubino", the Chinese grain company will provide cargo through the new port in the amount of up to 10 million tons per year. Currently, the port has already signed a number of similar agreements with Chinese suppliers. Earlier, an agreement of intent was signed between Suma Group and Jilin Province, within the framework of which agreements were reached on the preliminary structure and volumes of cargo flows through Zarubino from Chinese companies and the Chinese railway corporation Northeast Asia.

It is expected that next year the Russian-Chinese Expo will move to Russia. It is not ruled out that the event will take place in Primorye - in Vladivostok.