Notice: curl_setopt(): CURLOPT_SSL_VERIFYHOST no longer accepts the value 1, value 2 will be used instead in /home/admin/web/eastrussia.ru/public_html/gtranslate/gtranslate.php on line 101
 EastRussia sums up the results of the first two years of "advanced development" of Komsomolsk-on-Amur - EastRussia |
News January 28 2020
Trans-Baikal Territory 08:26 Coronavirus diagnosis not confirmed in father and daughter from Chita
Sakhalin Region 07:45 A strong earthquake occurred near the South Kuril Islands
Amur Region 07:31 Flights from Blagoveshchensk to Sanya suspended due to coronavirus


Primorsky Krai 07:16 Homes for interest holders can be completed at the federal expense in Primorye
06:46 Outbreak of coronavirus will affect the Russian tourism industry
The Republic of Sakha (Yakutia) 06:32 EastRussia Bulletin: Glavgosexpertiza approves Chayandinskoye field project
Magadan region 06:22 Ex-corruption fighters sent to court for bribes in Magadan
The Republic of Sakha (Yakutia) 06:00 Dual control system will be installed in Yakutia due to coronavirus


Khabarovsk Krai 05:42 Khabarovsk Polymetal enterprises produced over 17,5 tons of gold per year
05:26 The Ministry of Internal Affairs has calculated the damage from economic crimes in Russia
Primorsky Krai 05:16 Primorye received test systems for the detection of coronavirus
Khabarovsk Krai 05:00 Mother of children abandoned at the airport is ready to pick them up
04:39 The Far East will receive almost 26 million rubles under the “Single subsidy”


Primorsky Krai 04:21 The work of officials will take control because of the coronavirus in Primorye
04:00 The index of industrial production in the Far Eastern Federal District exceeded the average Russian
03:41 Transbaikal residents were hospitalized with suspected coronavirus
Primorsky Krai 03:31 Japanese journalist detained in Primorye for attempted espionage
Jewish Autonomous Region 03:18 School and 17 classes quarantined in Birobidzhan

The long-term plan for the complex advanced development of Komsomolsk-on-Amur, calculated before the 2025, crossed the first two years of its implementation. While the townspeople with undisguised pleasure master the park near the capitalally ennobled drama theater and vying to discuss in social networks new art objects, cafes and attractions on the already completed stretch of the embankment, officials, designers and builders frown, trying to clearly fit in the tasks. His thoughts on this issue with EastRussia shared Deputy Chairman of the Khabarovsk Krai Government on issues of integrated development of Komsomolsk-on-Amur Dmitry Volkov. 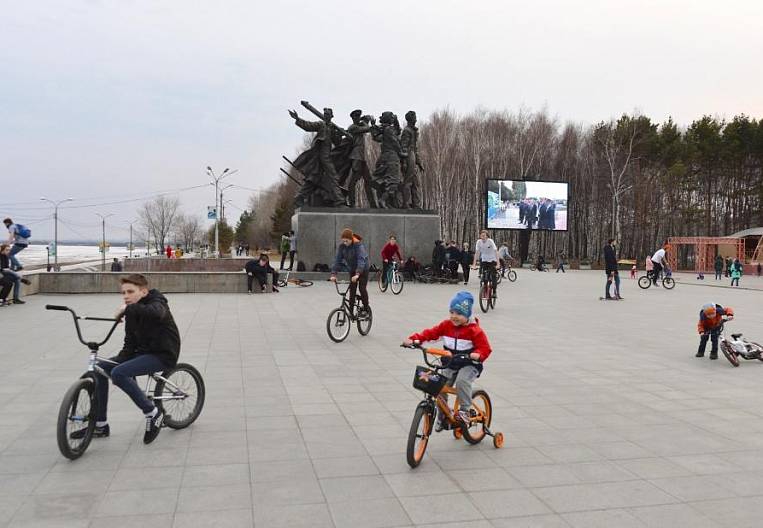 Photo: Press Service of the Government of Khabarovsk Territory
People on emotions

- The governor on the embankment of Komsomolsk-on-Amur went to mummies with strollers, and let them torture Komsomol mothers with Komsomol carriages and children in wheelchairs, also Komsomol, - retelling an episode from the recent trip of the head of the region to the city of Youth, which oversees his advance development deputy chairman of the regional government Dmitry Volkov almost does not hide his astonishment.

When young mothers began to thank for the introduction of benefits at the birth of the first child - everything is clear. And, although the initiative is not regional, but federal, and even specifically presidential, its importance does not detract from this. Most of all in that spontaneous conversation on the windy bank of the Amur was hooked, that to the question "What's wrong with you?" Komsomol members answered - nothing.

- To people in Komsomolsk-on-Amur to the question "What's wrong with you?" They replied that they all have it, I do not remember. There is always a lot of negative, and it has grounds. And so, in my opinion, what has happened is a radical change. People walk along the embankment, there it is beautiful, the governor approaches them and asks them how they are doing. This means that some combination of factors affects people, under which they prefer not to notice the negative in certain circumstances. Notice how conservatively I formulate. If I was told a year and a half ago that such a success would be, I would have laughed, - continues Volkov.

The human factor is the basis of a comprehensive plan. It was for the sake of people that he thought: that the work was, decent housing, even roads, but also culture, medicine, education and sport.

Each week, the governor of the province Vyacheslav Shport on the table are three tables on Komsomolsk: green, gray and blue. About those positions where everything is in time, those where delivery is scheduled for the next year - two and those that are to be started. Total 65 objects in the list. Inside the tables, too, gradation - by the color of the font (have time, do not have time). Accordingly, some regional government official receives a "magic kick" and goes to kick the entire chain of contractors. And among them, by the way, there was a place for even small local companies.

The order of the government of the Russian Federation, which legitimized the "special position" of the city of Youth, now, through the prism of the first trials and the errors that have been overcome, the responsible persons call only the declaration that set the motion vector. Already on the spot, in the industrial center of the entire Far East, it was necessary to pack this declaration into concrete steps, under each of which federal funding is being introduced.

By the way, according to the deputy governor of the regional government, who oversees the development of the "city of presidential attention", all is well with the money on all the items laid for this year.
The main thing is 1,4 billion for the completion of the engineering school, the record for the Komsomol roads 850 million rubles for their reconstruction, about the same amount for communal re-equipment and infrastructure. Plus, the children's hospital complex, embankment and engineering protection of the city from flooding.

- Must finish Lazo Street this year, start Komshosse and repair several more streets, the most important of which is Lenin Avenue. The city administration changed the strategy: in the past year, repairing secondary streets, and now decided to take on the main, city-forming, - says Dmitry Anatolyevich.

In the list of "communal" - a water pipeline and a gas pipeline. The "Sail" site continues to be prepared for residential development. This is the very basis for improving people's quality of life.
By August, competitive documentation has to be prepared for the selection of contractors for the construction of an oncological dispensary, a new ambulance station and a regional center for the development of sports (the first two lines are the center for complex coordination sports and a building for martial arts).

The long-term plan is a global investment project. Only investments here are not private, but budgetary. And their volume can be easily understood by comparing with the annual budget of Komsomolsk-on-Amur itself: last year they were equal, in the current investment (or financing, if someone does not like this word) - a double annual piggy bank of the city. In absolute terms - 7,5 billion rubles for 2018 year.

In this sense, the state is much more reliable investor than private business. Here have already seen enough of visiting projectors who painted modern sketches of new plants and promised to supply equipment for an engineering school, so each new project is considered almost under a magnifying glass.

Therefore, probably, and a loud application for the construction of an aquapark in the city center in the Khabarovsk Krai government comment moderately. Yes, the project is ambitious, expensive (drawing on 3 billion rubles), attractive for local residents. But there is no guarantee that the investor will not change his mind at the latest stage of the approvals.


But because without water ...

There is a plan in the plan under the number 16, which in due time successfully blended into the scheme of resuscitation of the communal infrastructure - the deironing and demanganization complex at the new city water intake. It seems that it was delivered as scheduled according to the schedule - in 2016, and the test samples showed the flawlessness of the technological scheme ... But loud statements that Komsomolsk is about to get basically cleaner water, died down.

While they were installing the latest equipment, the license for the possibility of using water from an underground source was terminated. Now the whole circle has to be re-started, because initially the project provided for water supply only to the Amur Shipyard, and the Khurbinskoye groundwater deposit was conditionally divided into two sections. The receiving commission did not consider this nuance as a formality, but decided to proceed from the fact that first the water intake should be made from the "first stage". And there did not have enough normative cubic meters.

- We had to do a lot of work, conduct field tests, order mathematical modeling at Moscow State University. Plus, get the license and the conclusion of Glavstroyexpertiza again. Maybe it's not bad, such a re-examination. Until the end of the year this work will end, and the complex will be launched, - Dmitry Volkov assures.

At the same time, the official makes an accent: the deironing and demanganization complex itself is an operating facility, and in the event of an accident the city water supply can be fixed on it for three days.

Initially, each project was financed from the target program of the relevant ministry. For example, the engineering school - the Ministry of Education. For two years running-in of a comprehensive plan, the feasibility of creating a specific instrument - a "single subsidy" - emerged.

While the essence remains the same, money is allocated from a single source and is used to modernize the social sphere of the city as a whole. This "uniform subsidy" for 2018 year is practically allocated, there were technical moments.

The plan itself, according to Dmitry Volkov, was very convenient to use:

- It is understandable and the administration of Komsomolsk-on-Amur, and the regional authorities, and the federal center. Therefore, under a carbon copy, it is quite possible to transfer it to the city of Svobodny in the Amur Region, where a long-term development plan also appeared. And in general, there are plans for the development of social infrastructure for all regions of the Far East. This is such a managerial copy of the plan for the city of Youth.

A well-worked out scheme is likely to save followers of the "city of presidential attention" not only from potholes and pits on the way to prosperity, but also help to really look at the claimed funding. Specifying that this is his private opinion, the supervising deputy chairman says:

- Those plans that were outlined in the 704-m disposal, in terms of their volume were not easy to implement. Almost immediately, the backlog began for some objects. This is because the mechanism that has to process all this into paper and bricks has stood too long and is therefore rusty. It is necessary to untwist all it.

Two years were needed for a very rough, unobtrusive, but very important work, in which the wheels begin to rotate quickly. This led to the fact that if we compare the figures from the long-term plan to the years of financing and real financing, then the second position is still less. In finite terms, not one object is reflected, but the interim periods are shifted. This should be treated calmly.

I myself derived an analogy with a person who had been ill with the flu. After illness, he is weak, he protects himself, he has shortness of breath and a fear of getting sick again. It takes some time to finally recover. And it took Komsomolsk such a time. But now all the pains of growth, in general, are over.
Tags: Komsomolsk development investments infrastructure building

Analytics Komsomolsk-on-Amur will develop according to plan