Notice: curl_setopt(): CURLOPT_SSL_VERIFYHOST no longer accepts the value 1, value 2 will be used instead in /home/admin/web/eastrussia.ru/public_html/gtranslate/gtranslate.php on line 101
 Moscow attracts investors from East Asia with “unique preferences” - EastRussia | Analytics of the East of Russia
News January 21 2020
22:23 The composition of the new government approved in Russia
Primorsky Krai 21:20 Control over arrivals from China strengthened in Primorye due to virus
Primorsky Krai 15:27 The construction of a giant tanker is completed in Primorye


Sakhalin Region 08:07 Sakhalin has become a leader in the fight against poverty
Amur Region 07:27 The development of the free power system will be considered by a government subcommittee
More news
Media News2
HOME Analytics 17.09.2015

The results of the WEF - in the reflection of Asian media

The Russian authorities held the first Eastern Economic Forum (WEF) in Vladivostok from 3 to 5 in September, obviously trying to invite investors from East Asia to the endless expanses of the Far Eastern regions. Translation of ASIA TIMES publication - on EastRussia.ru 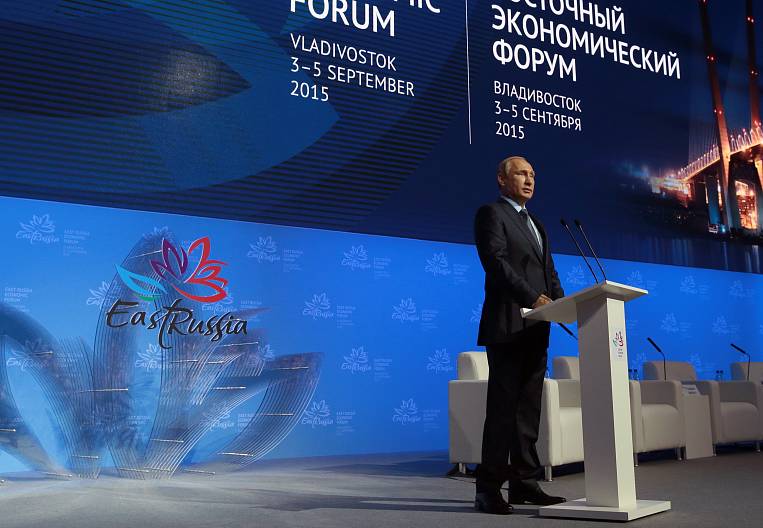 The Russian authorities held the first Eastern Economic Forum (WEF) in Vladivostok from 3 to 5 in September, obviously trying to invite investors from East Asia to the endless expanses of the Far Eastern regions.

The country's top officials arrived at the WEF to facilitate the flow of finance from Asia to the Russian Far East.

4 September at the Eastern Economic Forum, Russian President Vladimir Putin said that Russia offers potential partners “unique opportunities and preferences,” which include tax breaks and government support for infrastructure projects. Such preferences are offered in a number of Far Eastern regions of Russia, including Primorye, Yakutia, the Amur Region, Chukotka, and Kamchatka.

Residents of the Free Port of Vladivostok will be able to take advantage of even more benefits, Vladimir Putin said. Russia intends to create a huge transport and logistics hub around Vladivostok, which will serve the entire Asia-Pacific region, he said.

In July last year, the Russian authorities revised some of the legal provisions in order to grant Vladivostok free port status for 70 years. The law guarantees the new port of Vladivostok such privileges as a free customs zone, a simplified visa regime, and a reduction in tax rates on profits and on property. The status of a free port (free port) provides for easier customs regulation and less strict customs control during transshipment of goods.

The Russian authorities also promise to develop transport infrastructure to serve the growing volumes of transcontinental transportation. Putin told VEF participants that Russia intends to spend 500 billion rubles (7,4 billion dollars) before 2017 for the modernization of the Trans-Siberian Railway and BAM in order to increase the freight traffic between Asia and Europe.

Previously, authorities in Moscow have repeatedly promised to take measures to increase rail transportation along the routes of the Trans-Siberian and Baikal-Amur Mainlines. However, to date, these plans have not been implemented.

The Kremlin also prioritized energy projects as a major driver of the country's shift towards East Asia. According to Putin, the Russian state oil giant, Rosneft, plans to invest 1,3 trillion rubles (19,2 billion dollars) in the Far East.

During the WEF, Rosneft announced a deal to sell 15 percent of shares in Russian Vankorneft to Indian oil company ONGC Videsh Ltd. for 1,275 billion dollars. Rosneft also became a party to multilateral deals in Asian energy projects. During the forum, Rosneft and Japanese Japan Drilling agreed to cooperate in the development of the Nam Con Son offshore fields in Vietnam.

Meanwhile, Rosneft is still focused on energy partnership with its Chinese counterparts. In early September, Rosneft announced the signing of preliminary agreements with Chinese energy companies totaling about $ 30 billion, including China’s acquisition of an 49-percentage share in the Russian VSNK and Tyumenneftegaz, which control the Russian and Yurubcheno-Takhom deposits.

The Russian gas giant Gazprom is equally interested in developing partnerships in the energy sector with Chinese companies. September 3 Gazprom and the China National Petroleum Corporation (CNPC) have signed a memorandum on gas supplies from the Russian Far East to China.

On September 1, the head of Gazprom, Alexander Miller, promised to complete the construction of the “eastern route” of the gas pipeline from Siberia to China by 2018.

21 May 2014 Gazprom and CNPC signed an agreement on gas supplies to China via the so-called “western route”. The 400 billion-dollar deal provides for the delivery of 38 billion cubic meters of gas from Russia to China annually from 2018, 30 years through the “eastern route”. Gas supplies are expected to start between 2019 and 2021.

Russian monopolists of natural gas are also interested in developing energy partnership with other players in the East Asian market. 4 September, the head of Gazprom met with the management of Mitsubishi, Mitsui and KOGAS companies to discuss cooperation in the gas sector, in particular, in Sakhalin projects.

The Kremlin expressed the hope that Russia could play a big role in the economy of Asia. Russia's vast natural resources can accelerate economic growth in the Asia-Pacific region, Vladimir Putin said during the forum.

Putin's promises to support infrastructure projects were reinforced by previous state programs. In recent years, the authorities have promised to invest significantly to finance the economic development of the Far East, it is a figure of up to 10 trillion rubles (148 billion dollars) to 2015.

During the Eastern Economic Forum, Russian and foreign companies signed contracts totaling 1,3 trillion rubles (17,7 billion dollars). The forum has become another sign of the movement of Moscow to the East. It remains to wait whether the transactions concluded during the forum will be implemented as planned.