Notice: curl_setopt(): CURLOPT_SSL_VERIFYHOST no longer accepts the value 1, value 2 will be used instead in /home/admin/web/eastrussia.ru/public_html/gtranslate/gtranslate.php on line 101
 The fate of the Nizhneleninsk-Tongjiang bridge depends on its attractiveness to exporters - EastRussia |
News January 23 2020
14:16 Far Eastern Technological Fund financed projects for 500 million
Amur Region 14:11 Amur region will spend 70 million rubles on "Zemsky doctors"
Amur Region 13:06 Belogorsk was excluded from the list of single-industry towns


Trans-Baikal Territory 12:35 An investor from China will begin to build a grain terminal in Transbaikalia in March
Amur Region 11:34 Amur residents asked to refrain from traveling to China
Amur Region 11:23 In 2020, 26 new FAPs will be built in the Amur Region
Chukotka 10:53 Entrepreneurship Development Center opened in Chukotka
Primorsky Krai 10:40 30-degree frosts will come to Primorye


The Republic of Sakha (Yakutia) 10:36 Supporters of the shaman Gabyshev detained in Yakutia
Primorsky Krai 10:20 Khan's “Crab King” is asked to be put on the international wanted list
Khabarovsk Krai 10:07 62 million rubles will be spent on payments to summer residents in the Khabarovsk Territory
09:19 Russia's population will be 50% retired by 2060
Primorsky Krai 08:36 A new ophthalmological center will open in Primorye


08:01 The concept of minimum wage may disappear from Russian legislation
Khabarovsk Krai 07:34 A court intervened in a case with a transport card in the Khabarovsk Territory
Amur Region 07:06 Amur region received more than 500 applications from "zemstvo teachers"
Primorsky Krai 06:36 Two residents of Primorye face a sentence for extremism
Amur Region 06:10 Several kindergartens were evacuated in Blagoveshchensk

Bridge Plus rate is

The railway bridge across the Amur, which is to connect the Russian village of Nizhneleninskoye with the Chinese city district of Tongjiang, has become one of the most scandalous investment projects being implemented in the Far East. The Chinese side completed its part of the bridge two years ago, and the Russian side did not even choose a contractor at that time. Now Russia is hastily completing the bridge, and it will be delivered in June next year. Will it be in demand among Russian exporters and what kind of cargo will be transported by it, EastRussia found out. 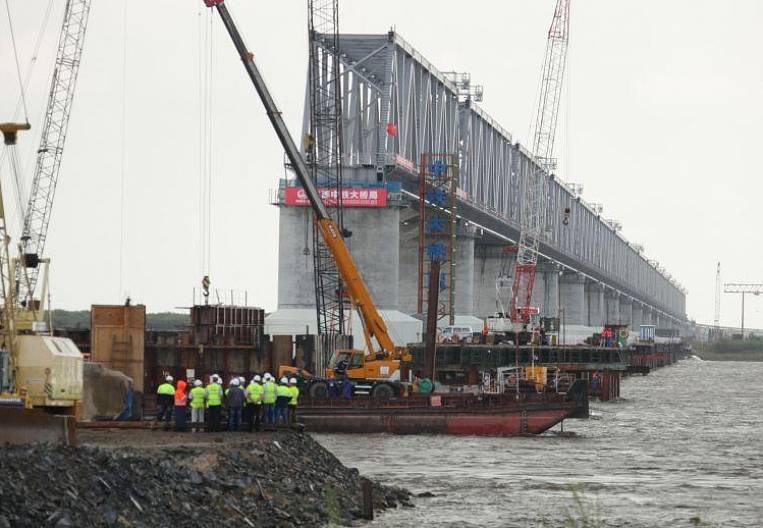 Photo: Minskostokrazvitiya
The principle agreement with China to build a railway bridge across the Amur was reached in 2008 year. It was to become part of the global project "New Silk Road", the essence of which is the creation of a land transport corridor between China and Europe. Transsib plays an important role in this project, and with the appearance of the bridge it would have increased even more. The bridge had to reduce the cost of transportation for Russian exporters, increase the transport accessibility of several Far Eastern regions and ensure the growth of commodity exchange between Russia and China.
"We are neighbors, we are close to each other, but we do not have enough infrastructure to realize the potential of this proximity," said Minister for Development of the Far East Alexander Galushka.

For the right to build a bridge across the Amur, two Russian regions competed: the Amur Region and the Jewish Autonomy. Many experts then thought it logical to build a bridge in the Blagoveshchensk area, combining it with the Chinese Heihe. However, in the end, the choice was made in favor of the border crossing "Nizhneleninsk - Tongjiang", which is located on the territory of the Jewish Autonomous Region. The determining factor was the construction of the Kimkano-Sutarsky ore mining and processing enterprise in this region. Here, iron ore is extracted, processed into concentrate and transported to the northeast of China, where iron is produced from the concentrate and steel is smelted.

The main lobbyist for EAO was Petropavlovsk, which owns the Kimkano-Sutarsky GOK. The construction of the bridge would reduce the transport shoulder by more than 700 kilometers and would reduce the cost of shipping the ore by 6 dollars per ton. It was planned that up to 2026 the bridge would provide GRP growth by almost 10 billion rubles. and the growth of tax revenues at the level of 3 billion rubles, and in the long term - what the hell is not joking? - the region will even cease to be subsidized. The project was supposed to be implemented according to the model of public-private partnership: Petropavlovsk invests directly in the construction of the bridge, the state provides interaction with the Chinese side, the creation of road infrastructure and tax preferences for exporters.

In 2013, an intergovernmental agreement was signed between Russia and China on the construction of a transboundary railway bridge crossing "Nizhneleninskoye - Tongjiang". Of 2 km 200 m, which according to the project is the length of the bridge, China was to build 1900 m, Russia - the remaining 300 m. The Chinese began to work immediately after the signing of the agreement. In Russia, they began to conduct interagency coordination and choose a general contractor. It took more than two years. During this time, the Chinese builders completed their part of the work, and the Russian managed to just lay a memorial stone. The bridge, breaking off at the Russian shore, became a symbol of the "proximity" that never happened, which Minister Alexander Galushka spoke about.

At the end of 2014, the Petropavlovsk company left the project. IRC's subsidiary sold the Rubicon firm, established as a customer and construction operator, to the structures of the Russian Direct Investment Fund. The company "Petropavlovsk" explained to us that this decision was dictated by a number of reasons, the main of which is the lack of an efficient mechanism for the participation of private capital in an interstate project. “We simply do not have legislation regulating the participation of private companies in such state projects,” a company representative told EastRussia. “They can only be realized by the state.”

After the Chinese side began to express dissatisfaction with the pace of construction (or rather, their lack), the Russian president intervened in the situation. The transition to manual control accelerated the signing of all permits and the selection of a general contractor. They became IC Most, which built a bridge to Russky Island in Vladivostok, a railway in Sochi and is now building the Arctic port of Sabetta, which is to provide transportation of liquefied gas within the Yamal LNG project. In June 2016, IC "Most" began construction work, and now the Russian part of the bridge is more than half ready.

In the company "Rubicon", supervising the construction, we explained that it is in full compliance with the schedule, and "the timing will not move further." "We have already reached the channel of the Amur River," said Andrey Viborov, chief engineer of the Rubicon company. - In addition to the construction of bridge supports, high-altitude supports for power lines are mounted, railroad embankments are piled up - in a word, a whole complex of works is being carried out. Terms are tough for us, but we stick to them. "

During the time the "Nizhneleninskoye - Tongjiang" bridge is being built, China signed an agreement with the Amur region, and an automobile bridge with an exit to Heihe is already being built in the Blagoveshchensk area. It is very likely that the cost of transporting some cargo, for example timber, along the road through Blagoveshchensk will be lower than the railway through Nizhneleninskoe. This means that the optimistic forecasts regarding the economic super-efficiency of the Nizhneleninskoye-Tongjiang bridge may prove to be erroneous.

"One way or another, the main volume of cargo that will be transported on the bridge will be provided by the Kimkano-Sutarsky GOK, as it was under this project that was created," said Arkady Umansky, deputy head of the economy department of the EAO government. - However, we expect that there will be other export cargo, for example, timber, soybeans, coal. All this is now exported to China by road, but when it becomes possible to reduce the transport leverage, I think many exporters will want to take advantage of this. Ultimately, everything will depend on the tariffs. "

It is the tariffs for transportation that will become the key factor that determines the economic efficiency of the project. The construction of a bridge worth over 10,5 billion rubles is financed from several sources. The bulk of the money comes from the Russian-Chinese investment fund created by the Russian Direct Investment Fund and the China Investment Corporation. The Fund for the Development of the Far East also participates in the financing of the project. Borrowed funds will need to be returned. The main owner of the bridge will be the customer and construction operator Rubicon. She will charge you for using the bridge. From the collected funds and debts will be paid to investors. The value of tariffs has not yet been established, since the object is not handed over. The expected payback period of the project is 16 years, but if the tariffs scare away Russian exporters, it may increase.

The governor of the EAO Alexander Levintal once said that the rapid payback of the project can be facilitated by the organization of passenger traffic on the new bridge. However, in this direction the Amur Region is clearly overplaying its neighbors. The automobile bridge in the area of ​​Blagoveshchensk is designed for 2 million passengers per year. China proposes to create a bond zone near the bridge, where a special tax and customs regime will operate. Also, not far from the bridge is planned to build a cable car through the Amur and a passenger terminal with a throughput of 2,5 million a year. As for the railway bridge "Nizhneleninskoe - Tongjiang", here about the passenger infrastructure while speech does not go. "In order to carry passengers, we need to build a terminal," says Arkady Umansky. - And this project is not today. Perhaps it will be implemented in a few years. "
Tags: bridge EAO building investments China transport infrastructure 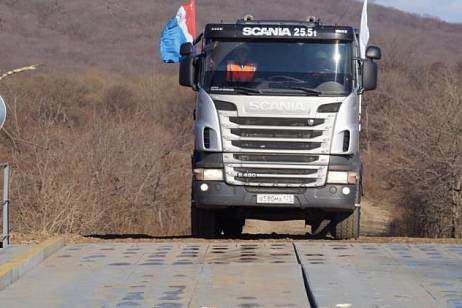 They managed to reach the winter: in the seaside village Filippovka, a bridge was rebuilt, destroyed by the August typhoon