Notice: curl_setopt(): CURLOPT_SSL_VERIFYHOST no longer accepts the value 1, value 2 will be used instead in /home/admin/web/eastrussia.ru/public_html/gtranslate/gtranslate.php on line 101
 Vyacheslav Shport: “Khabarovsk Territory is the only region where tin mining is being restored” - EastRussia | Interview
News 02 April 2020
Primorsky Krai 09:11 Business in Primorye will be exempted from lease due to coronavirus
Jewish Autonomous Region 08:49 Infectious Diseases Reconfigured Hospital in EAO Due to Coronavirus
Primorsky Krai 08:47 Fuel oil spill in Primorsky Krai half eliminated


Khabarovsk Krai 06:44 A fire regime was introduced in another district of the Khabarovsk Territory
Trans-Baikal Territory 06:31 The coal project will be included in the TOP Transbaikalia
06:16 Kudrin allowed Russia's GDP to fall to the level of the 2009 crisis
06:00 "Power of Siberia" resumed work after prevention
Primorsky Krai 05:42 Snow cyclone from the Sea of ​​Japan will cover Primorye

"We are the only region recovering tin mining"

The head of the region, Governor Vyacheslav Shport, told in an interview to EastRussia about the concrete results achieved by the economy of Khabarovsk Krai and on what projects they work there today, 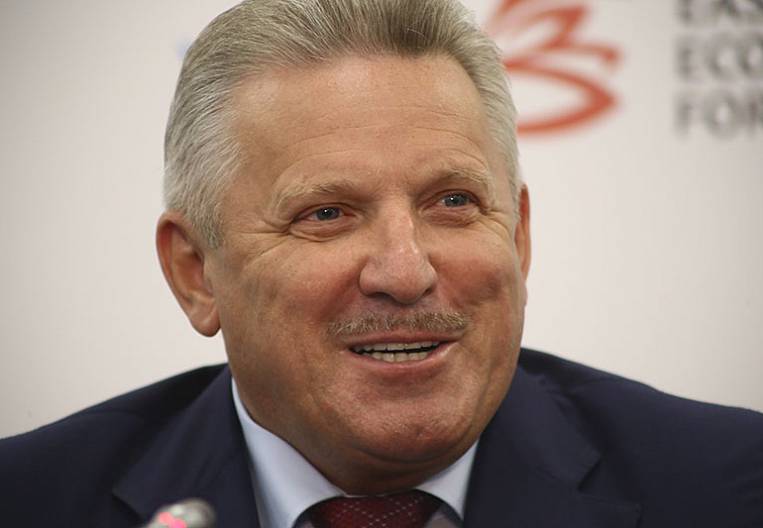 Photo: TASS
The Khabarovsk Territory is one of the most industrially developed regions in the Russian Far East. According to preliminary estimates, in the outgoing 2016, the industrial production index increased by more than 2015% compared to 2. Positive dynamics were achieved primarily due to the growth in the volume of production of goods and services in engineering, agriculture, logistics and fish processing.

- Vyacheslav Ivanovich, the Khabarovsk Territory has traditionally been famous for engineering. How effective has this industry proved to be in the outgoing year?
- Here we have something to rejoice, summing up the results of the year. Under the eyeballs loaded with long-term government orders Komsomolsk-on-Amur aviation plant them. Yu.A. Gagarin, a branch of the company "Sukhoi". A contract for the supply of thirty Sukhoi Superjet aircrafts to Aeroflot was completed by civil aircraft construction: seventeen of them were produced this year, and next year the volumes will more than double - up to 39 aircraft. This will be a record indicator of the plant in its entire history. In the field of civil shipping in July 2016, the regional enterprise "Khabarovskvodtrans" accepted from Khabarovsk shipbuilding plant the executed order - high-speed passenger vessel "70 Victory Years", which will transport passengers along the Amur River. By the way, the liner was successfully presented at the II Eastern Economic Forum, and on its board was visited by Russian President Vladimir Putin. As a result, the passenger companies of Kamchatka, Sakhalin, Yakutia and neighboring China have already agreed to buy liners of this type.

- What are the results of the mining industry?
- We are the only region in the country where domestic tin mining is being restored. As you know, this industry declined in the post-Soviet years. By the fall of this year, the Russian company Rusolovo reanimated and put into operation the “Solar concentrator” in the village of Gorny, which is located in the very center of the Khabarovsk Territory. Gold mining in the region is also on the rise: a mining and processing plant was built at the Svetloye deposit in the Okhotsk region nine months earlier than planned, and the first 300 kg of gold has already been mined here. Reaching the design capacity will allow to receive up to a ton of precious metal annually. Moreover, in June 2016 of the year, the Russian-American company Amur Minerals began the development of the Malmyzhsky gold-copper deposit in the Nanaisk region. The investment planned for the next five years is about $ 1,5 billion, and more than 2,5 thousand jobs will be created in the region.

- This year the long-term development plan of Komsomolsk-on-Amur was adopted. For the first time a separate city paid so much attention at the federal level. How is the implementation of the plan going?
- This is a key task, which we started to work on this year and will be engaged in until 2025 year. In particular, there are three directions for the development of Komsomolsk-on-Amur. This is the formation of the industrial and engineering center of the Far East, the modernization of social, transport and engineering infrastructure, as well as the creation of modern public urban spaces. In 2016, it is planned to complete the construction of the first facility - a complex of deironing and demanganation of groundwater. In cooperation with the Ministry of Education and Science, the Interregional Competence Center was opened, the only one in the Far East, and in Komsomolsk-on-Amur there was a children's technopark "Kvantorium." To implement the project, more than 56 million rubles was allocated from the federal budget. Among the large construction projects for 2017 year is the reconstruction of the drama theater, the embankment, the creation of the Engineering School.

- In July this year, the Russian government decided to extend the free Vladivostok port from Primorye to other coastal areas of the Far East, including the entire territory of the Vanino Municipal District of the Khabarovsk Territory. Are there already residents here?
- Yes, it was a very timely decision of the government. In terms of logistics, we can even compete with our southern neighbor, Primorsky Krai, where whole and 15 municipal areas are included in the tax and other preferences of the free port. The first resident of the SPV in the Khabarovsk Territory, of course, was the Far Eastern port of Vanino. The company plans to build a specialized terminal for transshipment of coal cargo: the fuel will be supplied from the Elegestsky coal deposit in the Republic of Tyva. The company plans to reach the design capacity of 15 million tons in five years, and the volume of investments will be more than 20 billion rubles. 18 companies with a cumulative total investment of 72 billion rubles are next in line to those who wish to become SPV residents in the Vaninsky district of the Khabarovsk Territory.

- Already a year and a half has passed since the signing of agreements on the creation of territories for outpacing socio-economic development (TACER) - Khabarovsk and Komsomolsk. How far did the first residents go to create real production?
- Today, the first phase of the greenhouse complex with an area of ​​2,5 ha and a capacity of about 1 thousand tons per year was put into operation in TOSER Khabarovsk. The investor was the Russian-Japanese company JGC Evergreen, and the amount of investments from the Japanese amounted to 500 million rubles, or 80% of all investments. Recently in Japan, we signed a memorandum on increasing the complex twice. Another investor - LLC "Agrarian Technologies of the Future" - with the support of the Japanese company MIRAI built a plant for the production of salad crops without a primer. The amount of investments is $ 8 million, and the productivity will be at least 400 t of salad per year. Also in August of this year in TOSER "Khabarovsk" on the site "Rakitnoye" a stone wool plant was opened, the domestic corporation "TechnoNIKOL", which invested in the construction of the enterprise 2 billion rubles, became the founder.

- And how active are the residents of the second TOSER - Komsomolsk?
- Here, for the time being, two sites of three really work: Amursk and Amurlitmash. At the first two residents have already begun to create woodworking industries: the Amur Forest Industrial Company and the Amur Industrial Center. On the second - the company-resident "Epsilon-2" plans to build a production complex for the production of parts for the needs of aircraft construction. Another resident - LLC "Komsomol meat-packing plant" - is going to place here an enterprise for the production of dairy products and canned meat. For the "Parus" site, we are developing additional measures to support investors. In general, today 22 companies have the status of a resident in two TSEIR Khabarovsk Territory. In aggregate, they have already invested about 4,5 billion rubles, created about 300 jobs, paid more than 100 million rubles in taxes. Altogether, 52 applications with announced investments of the order of 65 billion rubles were received from the Far East Development Corporation from those wishing to become residents of TOSER Khabarovsk and Komsomolsk.

- How is the implementation of the federal law on the "Far Eastern hectare"?
- Since June of this year, the provision of land plots to citizens began. First, in the "pilot" Amur region, and from 1 October 2016 year the program has earned throughout the Khabarovsk Territory. Total for these purposes can be used up to 45 million hectares, or 57% of the edge area. Today, more than one and a half thousand applications have been accepted, about 600 citizens received land, more than 200 contracts were sent to citizens for signing. People make out previously used land plots plus take a hectare for new development. We have several interesting projects, for example, the creation of a medical center in Amursk, the organization of a seasonal climbing wall, the center of Slavic culture and traditions in the Komsomolsky district, the construction of a ski resort in the Mykolayiv district. We expect that from February 2017, when one hectare of land in the Far East will be received by residents of the whole of Russia, the influx of applications for Khabarovsk hectares will increase significantly.


Help
In 2017, the government of the Khabarovsk Territory intends to extend the TACER regime to other territories of the region, except for the cities of Khabarovsk and Komsomolsk-on-Amur. So, about three billion rubles of private investments are planned to be invested in the economy of the Mykolaivsky municipal district. Eight projects for the construction and reconstruction of fish processing plants, the creation of bases for the repair of sea and river vessels, and the transport and logistics center are scheduled for implementation here. It is also planned to develop the sports infrastructure of the mountain-skiing complex "Kholdomi" in Sunny municipal district, the creation here of a full-fledged Far Eastern training base for the preparation of the national team for alpine skiing and snowboarding.

Interview Oleg Kozhemyako: "We must keep our word"

The Governor of the Sakhalin Region told the readers of EastRussia how to make life in the island region comfortable, interesting and prosperous 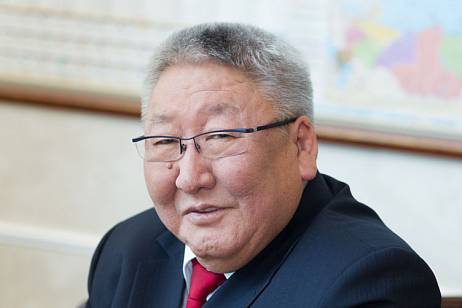 Interview Yegor Borisov: "We always work ahead of the curve"

The head of the republic of Sakha (Yakutia) Yegor Borisov - about the present and future of his region, and also about whether the government can make people happy