Vladivostok is not happy about all Chinese

Against the backdrop of growing mass “cheap” tourism from China, Primorye loses its well-to-do guests: they often lack attention and service. 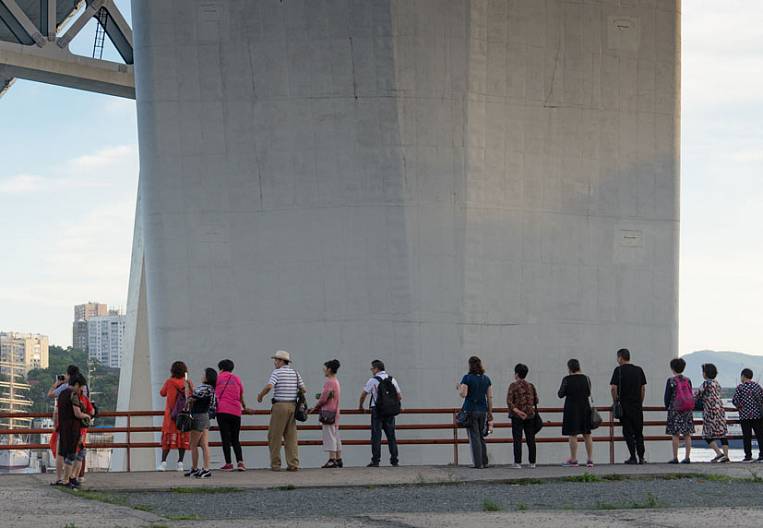 Why does Russia need a new bridge in the DPRK? WEF as a platform for the development of inbound tourism in Primorye Inbound tourism: benefit or damage to Primorye?
All author's materials
Recent years in Vladivostok there has been a significant increase in tourist flow from the countries of Northeast Asia. In 2018, Primorsky Krai was visited by a record number of foreign visitors in 10 years - 780 thousands. This figure is 20% larger than the 2017 indicator of the year. The largest increase in 120% was shown by the flow of tourists from South Korea, reaching thousands of people in 220. However, the most numerous in Primorye are still tourists from China. In 2018, thousands of PRC citizens visited 422 in the region, of which 365,5 thousands visited the region for tourist purposes. Although the number of tourists from Japan increased by 20% compared to 2017 a year, their total number amounted to only 20 thousand people, which is relatively small compared to the number of tourists from China and Kazakhstan.

Vladivostok residents have become accustomed to the many friendly Asians walking through the city center. However, looking at the situation through the eyes of a representative of the tourism industry, it becomes clear: if the South Korean and Japanese tourists go to watch the beautiful Russian city of Vladivostok, then most tourists from China, without realizing it, actually get acquainted with the achievements of Chinese business in Vladivostok.

Unsustainable observations suggest that the “quality” of the tourist flow from the PRC is markedly reduced. Thus, in the 2014-2015 years, immediately after the sharp fall in the exchange rate of the Russian ruble, the capital of Primorsky Krai was visited mainly by wealthy citizens of China, most of whom had not previously traveled to Russia. For them, a trip to Vladivostok became a kind of familiarization with Russian culture as a whole. Today, a similar category of Chinese tourists prefer to visit such cities as Moscow, St. Petersburg, Sochi, where they receive high-quality tourist services corresponding to their income level.

In Vladivostok, however, middle and low-income strata of the PRC population (trade union members, students, pensioners) from the nearby Chinese provinces of Heilongjiang and Jilin, who visit Primorye as part of organized tourist groups, are increasingly coming. According to various estimates of participants in the tourism business of Primorye, in 2018, this figure ranged from 50 to 70% of the total number of tourist arrivals from China.

It would seem, what's the difference who and how visits Primorye? The main thing that they visit and spend money on the territory of Russia. However, in the case of Chinese organized tourists, the situation is not at all as simple as it seems at first glance.

The fact is that similar tour groups from the PRC are located in Vladivostok within the same “tourism sector” created by the Chinese, including cafes, shops, recreation centers and transport companies controlled by the Chinese business. Payment of the tour is made on the territory of China. At the same time, given the "gray" scheme of providing tourist services, the cost of a trip to Russia is very cheap. The minimum tour price in the capital of Primorye can reach 6-7 thousands of Russian rubles. This amount usually includes transportation service from China to Vladivostok and back, living in a modest hotel, visiting shops, walking around the city, accompanied by a Chinese guide. Additional services, such as meals, visits to museums and exhibitions, domestic transportation costs, etc., are paid separately.

At the same time, such tour groups often cannot afford to visit the key sights of Vladivostok, without which you can’t call a trip to the capital of Primorye full-fledged. As a result, the cultural program of such economy tours is reduced to a photo session at the C-56 submarine and sometimes a trip to the Tokarev lighthouse.

In addition, organized tour groups from the PRC are not able to visit the expensive and well-known restaurants of Vladivostok, which constitute the “tourist brand” of the capital of Primorye. Instead, visiting citizens of China eat seafood of dubious quality in cheap cafes that are under the control of Chinese business or even in illegal canteens organized by enterprising businessmen from the PRC in private homes.

Russian participants in the tourism industry, well acquainted with the history of Primorye and ready to show the true tourist face of Vladivostok, are practically excluded from the chain of providing relevant services for guests from the PRC.

This situation has a number of negative consequences. First, the money spent by tourists actually does not leave the limits of the PRC economy, in fact, moving from one Chinese pocket to another.

Secondly, the residents of the northeastern regions of the PRC are gradually forming a somewhat distorted view of both Vladivostok as a whole, and of its history, culture, and way of life. The practice of communicating with the residents of the Chinese provinces bordering on Russia shows that many of them when talking about Vladivostok can only recall the “market for Sportivnaya” (wholesale and retail sales center for products from the PRC) and the “submarine” (Museum “U-boat”).56"). Thus, now the Chinese stalls in Vladivostok are gaining greater popularity among residents of the northeast of the PRC than the unique fortifications of the Vladivostok fortress, the Maritime Theater Maritime Theater and the aquarium.

Why is such a “stratification” for the poor and rich peculiar to Chinese tourists, while quite well-to-do tourists come from South Korea who use the full range of services provided by local Russian business?

One of the reasons lies in the peculiarities of the geographical location of China and the Republic of Korea in relation to Russia. The PRC and the Russian Federation have a long land border, as a result of which tourists from the Middle Kingdom have the opportunity to visit Russia by cheap road transport, and travel companies can reduce prices by increasing the number of vouchers sold. From South Korea, you can get to Vladivostok only by plane or ferry. Against the background of road transport, neither one nor the other way can be called cheap.

As a result, for poorly affluent segments of the Chinese population, Vladivostok is becoming one of the most accessible destinations of overseas tourism. But this factor alone would not be enough. Here, another aspect is superimposed, namely, the long-standing maintenance of trade and economic relations between the Primorsky Territory and the Chinese provinces of Heilongjiang and Jilin, which resulted in the formation of a strong Chinese diaspora in Vladivostok. In response to the growth of tourist interest on the part of China to Primorye (which occurred after the devaluation of the ruble), many businessmen from China who live in Vladivostok took up the organization of new types of business related to the reception of tourists from China. And they began a frank dumping, reducing the quality of service, going into the shadows and earning on the volumes of tourist flow.

What kind of tourist the economy of Primorsky Krai really needs is clearly seen in the example of guests from the same Korea. Thanks to social networks in relation to the capital of Primorye, Koreans have formed an image of a beautiful and romantic city on the seashore. As a result, according to RK travel agencies, about 65% of South Korean tourists visiting Primorsky Krai are young girls under the age of 35 who travel to Vladivostok for entertainment, delicious food and beautiful photos for Instagram and Facebook

Is it possible to attract similar tourists from China? Young, affluent, interested, really immersed in the culture of the city, try entertainment, go to a restaurant and go shopping? I think that yes - and for this we need to systematically invest not only in the promotion of our tourist product, but also in the overall level of service in the region. The main events should be aimed precisely at convincing the Chinese to come to Vladivostok again, recommend a tour to Primorye to relatives and friends, and write positive reviews on social networks.

Already, from communication with “advanced” foreign tourists it can be concluded that not all leave Primorye satisfied. Many people pay attention to the shortcomings, mainly their dissatisfaction is caused by the lack of qualified translators at popular attractions, difficulties with transportation, low level of service. Even such a problem as the lack of comfortable public toilets can spoil the impression of the trip so much that a person will not only never return to Vladivostok, but will also discourage all his friends from going to the capital of Primorye. The Chinese neighbors, who come to Vladivostok in large quantities by bus, do not bother. But do we really need to focus on their tastes in the development of tourism?
Tags: tourism Vladivostok Primorsky Krai China service Travel

Analytics Take tourism out of the invisibility zone

Why Google ignores Kamchatka travel agencies and what’s the reason for clusters, EastRussia