Notice: curl_setopt(): CURLOPT_SSL_VERIFYHOST no longer accepts the value 1, value 2 will be used instead in /home/admin/web/eastrussia.ru/public_html/gtranslate/gtranslate.php on line 101
 Vityaz Aero is building a new hotel in Kamchatka - EastRussia |
News February 25 2020
Amur Region 23:42 The prosecutor's office will conduct an audit after the descent of wagons with coal in the Amur region
23:21 Russians began to spend less on products
22:24 More banks started issuing Far Eastern mortgage

New hotel in Kamchatka: live like in a volcano

In Petropavlovsk-Kamchatsky, construction of a world-class hotel complex began: in walking distance from the historic center, with a magnificent view of Avacha Bay, there will soon be a modern building combining hotel-service level 4-5 stars and numerous entertainment opportunities. The initiator of the project received the status of a resident of the Free Port of Vladivostok to simplify the import of equipment and saving on taxes and draws to participation in the construction of a federal and international structure, although it invests only its own. The new hotel, whose name will be chosen by the contest, promises to become one of the attractions of the country of volcanoes, because it itself will be externally like a volcano. 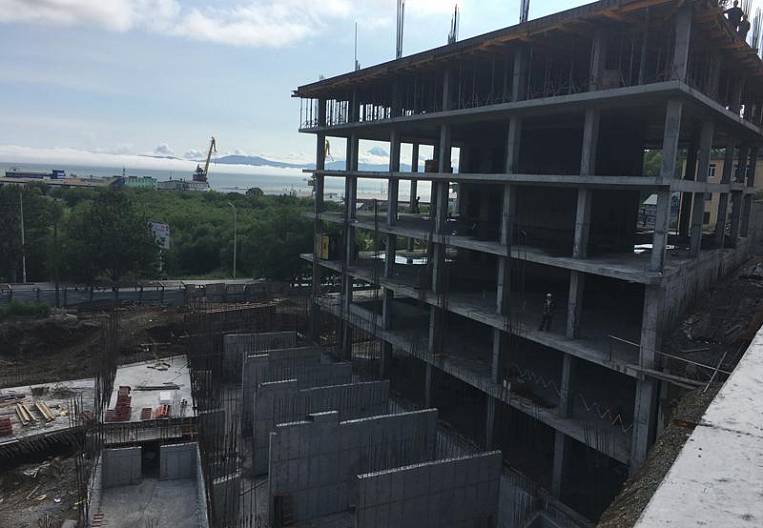 The initiator of the project to build a hotel complex along Leningradskaya Street in Petropavlovsk-Kamchatsky was the top management of the leading helicopter carrier in Kamchatka, Vityaz-Aero. In 2016, the corresponding investment project was presented to LLC "New House", having started the preparatory work. In January 2017, the company received the status of a resident of the Free Port of Vladivostok in Kamchatka. Private investment in the project is estimated at 2 billion rubles, the payback period for the project is 8 years. Construction began this spring, however, before this developer had to build a retaining wall, due to the complexity of the relief, leaving at 20 m in depth. At the site now works 150 people, by the time of finishing them will be up to 300 people.

The total area of ​​the future complex variable number of storeys - about 28 thousand square meters. "The complex will be of mixed use - hotel, entertainment, tourist and business," explains project manager Dmitry Kotov. - It includes, firstly, the hotel tower itself - on 180 numbers, or 300 seats. The hotel will be no worse than a class of four plus - five stars: the first one in Petropavlovsk-Kamchatsky, and for many years, probably, one, since the flow of tourists of this level is small. Manage the hotel will be the Moscow "Alliance Hotel Management". Secondly, the concert hall, it's a conference hall, on 600 seats. Thirdly, a large fitness center with an 25-meter full-size swimming pool, a SPA center and a Korean style bathhouse. Also, the complex will include office premises and various entertainment facilities, for example, a sky bar is planned to be located at the top. "

The representative of the investor emphasizes that most of the establishments of the hotel complex "will be oriented to the whole city". In addition, the hotel will employ about 110 person staff, in the remaining facilities of the complex - more about 60-70. Some qualified specialists will have to be brought to the peninsula.

For the new complex was chosen a playground with a beautiful view near the embankment of Kultuchny Lake, which previously had repeatedly tried to build a hotel, but so far - never happened. However, the initiators of the project are sure that this time the city will receive a new modern complex, the image of which was invented by Levon Airapetov - an elite Moscow architect. The building promises to become an ornament of the capital of Kamchatka.

"The hotel itself will look like a volcano, with facades of gray crushed aluminum and an outline trail of stainless steel reflecting the red floors of the sky-bar. The conference hall will visually "flow" from the roof downwards, depicting lava. The office building will be glazed using a special white spray and have an uneven shape - like an ice block, "says Dmitry Kotov.

The complex will also be unusual from the seismic point of view: large buildings will in fact be "suspended" on rubber-metal supports, which will provide an additional guarantee of safety in earthquakes. Such a design has so far been applied in the construction of only one building in Kamchatka - a new marina.

According to Dmitry Kotov, the builders have already approached the middle of the project: the main lower floors are planned to be completed in the autumn. The hotel tower will be completed in March, at the same time the installation of facades from a supplier from Shanghai will start this winter. Finishing work will be conducted from the summer of 2018 by contractors from South Korea, preliminary negotiations with them have already passed. Earlier, we note, it was reported that the project will include the Korean Dongha Co., Ltd - its representatives met with Kamchatka Governor Vladimir Ilyukhin.

"The delivery of the main building is planned for the second half of 2019 year, although, perhaps, some work will continue - for example, the opening of the fitness center can take place a little later. In addition, the second stage of the project assumes that a visit-center for exhibitions and a park will be created across the road on the shore of Kultuchny Lake. This project we will do not before the end of 2018, "- clarifies Dmitry Kotov. In addition to the arrangement of the park zone and the visit center, it is planned to put in order the treatment facilities, as well as to build a helicopter pad necessary for the delivery of tourists and the work of fire and sanitary aviation.

Dmitry Kotov emphasizes that the investor plans to use the Free Port Vladivostok regime in at least two points: he will take advantage of the right to import duty free equipment and benefits on the wage fund. “Plus reduced VAT. In general, this mode is a good thing, and it is good for large projects, ”he sums up.
Tags: Kamchatka tourism inn Knight Aero Free port

The Republic of Sakha (Yakutia) Hotels in Yakutsk waiting for an upgrade?

Will the Hilton come to permafrost - studies EastRussia

The book "Fairytale Kamchatka", prepared by the editor Alexandra Agafonova and illustrator artist Ekaterina Sokolova, is printed thanks to the support of users of crowdfunding planeta.ru