Notice: curl_setopt(): CURLOPT_SSL_VERIFYHOST no longer accepts the value 1, value 2 will be used instead in /home/admin/web/eastrussia.ru/public_html/gtranslate/gtranslate.php on line 101
 The project from Vladivostok went to the finals of Startup Tour 2020 - EastRussia |
News February 27 2020
The Republic of Sakha (Yakutia) 19:50 More than 55 billion rubles invested in Tomtor development
16:20 Residents of remote villages will be able to withdraw cash in stores
14:53 Far Eastern Federal District will give 2,5 billion for flood victims

Victory of the “Adam Robot”

The regional stage of Open Innovations Startup Tour 2020 has completed in Vladivostok. The largest competition of innovative projects in Russia and the CIS was held from January 23 to 24 at the site of the Far Eastern Federal University. The winner of the regional stage of the competition of innovative projects - the robot Adam will present the Far East in Skolkovo 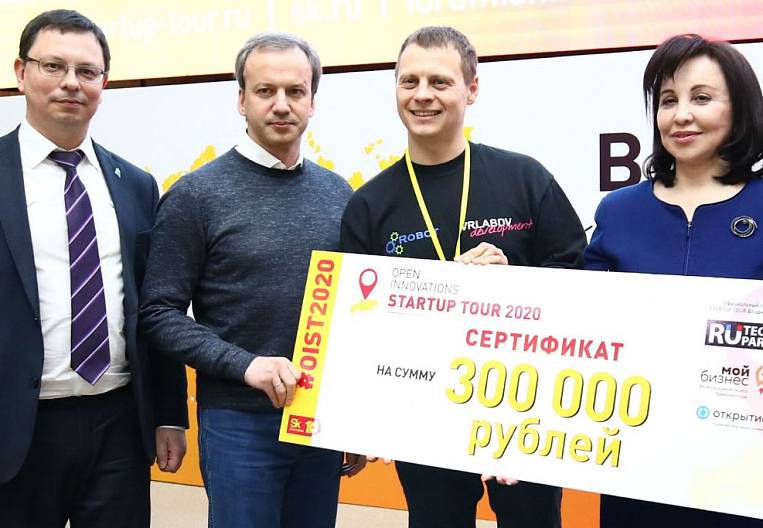 The main struggle for a ticket to the Russian final unfolded between the winners in three tracks: information technology, industrial and energy technology, biotechnology in medicine and agriculture. In the first, the developers of a personal robot with the symbolic name “Adam” took the lead, in the second - the authors of the non-waste technology for the production of ilmenite concentrates of white and red pigments (both residents of the Russky and Skolkovo technoparks), in the third - a team of developers introducing a digital rehabilitation platform children with cerebral palsy (PlantyGo) from Yakutsk.

Representatives of the teams had to make five-minute presentations in order to convince experts of the advantages of their developments.

“We designed our robot for educational purposes and research. There are inexpensive designers on the market (more suitable for schoolchildren) or very expensive cars. Therefore, there is a difficulty in training highly qualified specialists in the field of robotics - they simply have nothing to practice and hone their skills, ”says the founder of the company“ Robot ”Alexander Ganyushkin. - When creating Adam, we were guided by world analogues - NAO and DARwIn robots. So far, at a price ours is inferior to the NAO robot, but it is more compact and mobile, and we know how to reduce production costs and increase product margins by 2-2,5 times. The main advantage of our solution is in the robot control system using VR, we were the first in Russia to develop it and are now patenting it. ”

According to Alexander Ganyushkin, last year the company attracted three million rubles of investments in the organization of pilot production, this launches the service "letting the robot in rent." It focuses on the world market, which is estimated at about two billion dollars, and already has partners ready to sell the product to Germany, Saudi Arabia, the UAE, and Qatar.

The jury recognized the performance of the founder of the company "Robot" Alexander Ganyushkin as the most impressive, and awarded him 300 thousand prize rubles and a ticket to the finals of the Startup Tour 2020, which will be held in May.

The contest once again showed how hard it is to break into industrial technologies against the backdrop of spectacular digital presentations and the statements “I want to be cooler than Google!” And “capitalization of an IT company - a billion dollars in 36 months”. Yes, and a margin of 36-43% is hardly ever possible with manufacturers of means of production.

Therefore, the second place was predictable (without reaching the Russian finals) of the Titanium company, which promotes non-waste technology for processing ilmenite concentrates to produce white and red pigments. Meanwhile, our country imports the white pigment (titanium dioxide) needed to produce white paint, paper, plastic and much more. In the world dirty and energy-consuming technologies are used for its production, and a team of scientists led by Pavel Gordienko from the Institute of Chemistry of the Far Eastern Branch of the Russian Academy of Sciences and the Far Eastern Federal University developed non-waste and cheaper. But while Russia, having enormous reserves of raw materials (second place after China), buys titanium pigment, and exports raw materials for its production to China. And it could export finished products, and, given the lower cost, oust other manufacturers on the market. And almost ten years it took to finally become interested in the project entrepreneur.

“For a long time everything was at the level of test tubes, we want to create a technological unit and test the technology, in fact, launch regional development. Now we have a strong engineering team, we have designed a preliminary design, then there will be a worker, and then scaling and construction of the plant. I am sure this is a world-class project. It will allow creating in the region where there is a deposit of the necessary raw materials, new production and jobs, closing the needs of the Russian market and further exporting finished products, ”explained businessman Evgeny Moskayev.

Unfortunately, getting bogged down in the description of the technology details, he could not convince the jury, led by Arkady Dvorkovich, that the project was a breakthrough. By the way, after the announcement of the results, he approached Yevgeny Moskayev and expressed regret that he had not “delved into the details of the project” and voted for another project: they said that the time in the final was limited and he could not ask additional questions.

The third place was taken by the Kinestetika company with the project Digital Platform for the Rehabilitation of Children with Cerebral Palsy (PlantyGo). Evgeny Samoshkin also looked spectacular, showing how children, playing an exciting video game, simultaneously develop their motor skills. The main advantage of the development is that you do not need high-tech devices, just a regular computer. But the idea of ​​“Adam's robot”, which had already begun its journey to the world market, nevertheless looked larger, although Kinestetics also has international prospects.

In total, 96 applications from Yakutia, the Khabarovsk Territory, Primorye, Chukotka, Sakhalin and Amur Regions were submitted to the competition, half were provided by Primoryeans, mainly residents of the Russky technology park. Of these, 30 projects were admitted to the semifinals, and all the teams were able to attend master classes and lectures by top managers of the Skolkovo Foundation. The head of the fund, Arkady Dvorkovich, adviser to the chairman of the board of directors, Pekka Villakainen, vice president of grants, expertise and tender activities Sergey Krzhanovsky, head of the regional development department Yuri Sibirsky, director of ecosystem development at Skolkovo Ventures Stanislav Kolesnichenko spoke about measures to support technology entrepreneurs in the regions, gave practical advice on attracting business angels and investors to projects, analyzed typical presentation errors.

Participants of the Startup Tour 2020 in Vladivostok, who became winners in three tracks, received an invitation from the Innovation Assistance Fund to participate in the Start program. It gives a chance to get two million rubles for the development of the project. They will also be able to attend Startup Village, a large-scale startup conference for technology entrepreneurs in Russia and the CIS, which will be held in Skolkovo in the spring.

“Russky Island is the first place where an anniversary tour was held in honor of the Skolkovo decade. The competition is serious, and, I think, there are chances that some projects will become success stories not only in Russia, but also on the global market, and in various fields. The jury also noted that earlier technological projects were presented by scientists, and now entrepreneurs have appeared. We are glad to see this, and we will support them. There will be an even more competitive story in the Russian final: startups from all over the country, the best of the best, will come together, international experts will come. Teams need to seriously prepare, especially regarding presentations, ”said Arkady Dvorkovich, chairman of the Skolkovo Foundation, summing up the results.

The next city in the route of the All-Russian Open Innovations Startup Tour is Arkhangelsk. There, on February 4 and 5, the regional stage will take place at the site of the Northern (Arctic) Federal University named after M.V. Lomonosov.

Open Innovations Startup Tour is the largest project in Russia and the CIS countries, aimed at spreading the culture of technological entrepreneurship and identifying promising innovative projects. Since 2011, he has visited 95 cities, experts have examined more than 15 thousand applications submitted to the competition. The main goal of the road show is the development of technological entrepreneurship through stimulating the growth of local investment communities, technology parks and venture capital businesses. In 2020, Open Innovations Startup Tour will visit Vladivostok, Arkhangelsk, Ivanovo, Perm, Krasnoyarsk, Innopolis, Yekaterinburg, Ufa, Tomsk, Krasnodar. The organizers are the Skolkovo Foundation and the Skolkovo Forum ANO.