Notice: curl_setopt(): CURLOPT_SSL_VERIFYHOST no longer accepts the value 1, value 2 will be used instead in /home/admin/web/eastrussia.ru/public_html/gtranslate/gtranslate.php on line 101
 President on the wire - EastRussia |
News 01 April 2020
04:44 The State Duma approved the law on visas for residents of the TOP and SPV
04:31 Large retailers will refuse cash due to coronavirus
Khabarovsk Krai 04:16 Khabarovsk entrepreneurs freed from checks due to coronavirus


11:54 More than half of Russians found themselves in a crisis without savings
Sakhalin Region 11:40 Full isolation mode introduced on Sakhalin
More news
Media News2
HOME Analytics 17.04.2015

President on the wire 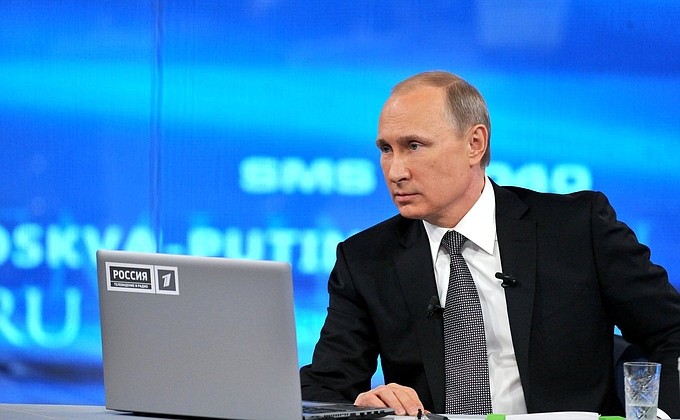 This year, a straight line with Vladimir Putin lasted 3 hours 57 minutes, the president answered the 74 question. They dealt with the current international situation, the war in Ukraine, the socio-economic situation in the country (a resident of Primorye asked about price increases), small business problems (a question on this subject was asked by an entrepreneur from Khabarovsk) and the agricultural sector. The theme of the Far East again, like a year ago, was raised in a problematic context. They also talked about the situation at the Vostochny cosmodrome: the builders of the cosmodrome asked the president to deal with the non-payment of salaries and take this important object for the country under personal control.

East is not worse than the Crimea

The topic of non-payment of salaries at the spaceport Raised builder Anton Tyrishev from Primorye, who began working at the facilities of the East in 2012 year, and before that he built the Golden Bridge (one of the objects of the APEC-2012 - author's note) Vladivostok. Putin recalled that in connection with the violations during the construction of the facility, he initiated inspections, according to the results of which criminal cases have already been opened.

"These Failures and problems with payments - this is absolutely unacceptable, and no one will put up with it. First of all, because all construction is financed from the federal budget, and only this year 40 billion rubles have been allocated for it, and all of them have been paid to the contractor. I do not know why they do not reach the subcontractors, to the executors, why the salary is not paid - this is a big question that requires and is looking for its painstaking researcher not only in the person of the Control Department and the Accounts Chamber, but also in the person of the Investigation Committee (investigative bodies and the Prosecutor's Office are investigating the cases of multibillion theft on the construction of the facilityAn audit of the use of Roscosmos and Dalspetsstroi funds is also being conducted - approx. author)», - said the president and promised that the authorities will achieve debt repayment.

Another builder, Vladimir Ostamchenko from Khabarovsk, said that the East has as much significance for Russia as the return of the Crimea, so those responsible for the construction must know that the facility is "under the personal control" of the president.

“It's hard not to agree that this is one of the most important, if not to say, at the moment building of the country. Need him (cosmodrome - author's comment) Because we, in fact, and the cosmodrome, there is no normal. We have Plesetsk pads, but this is a military spaceport. Actually, we do not have a civil one. We use Baikonur, but it is located on the territory of another state, we will continue to use this cosmodrome. But Russia - a major space power - must have its own site for launching all types of spacecraft into orbit, and, of course, we will do it, especially since we have big plans, "Putin said.

At the end of this year, Soyuz-2 should be launched, he recalled. The launch of a heavy "Angara" (The first launch of the Angara A5B modification was originally scheduled for 2021 year - author's note) Can be shifted "for technological and not economic reasons", since by the year of 2023 Russia is going to create in the orbit a national space station instead of the ISS. These projects are of great economic and economic importance. "Therefore, we will certainly bring this project to the end, and he will undoubtedly be under our control", - the president addressed the builders of the East.

The president also said that he would not allow disruptions in the work of the Siberian plant of the Irkut Corporation: the company can rely on a long-term contract with the state for military equipment.

According to Putin, for the next 2-3 of the year, the plant’s order book is fully staffed. “There will be a talk about new orders. Maybe new fighting vehicles, ”said the president.

As for the civil aircraft MC-21, which is being prepared for production, the president explained that "today we have 100-120 about so-called" soft "contracts, that is, those that are signed before obtaining the appropriate certificates." He expressed the hope that by the time of 2017 contracts will flow into so-called "tough" contracts already with certification. " "I proceed from the fact that this work will be conducted rhythmically, and we will not allow any disruptions in the activity of the enterprise," Putin said.

Entrepreneur Sergey Bakhov from Khabarovsk (his company BASK-PLASTIC is engaged in the production of plastic products and secondary processing of plastics - author's note) drew the president's attention to chronic problems of small business.

“The last meeting of the State Council was on small business. It was said that a small business compared to a large unequal position: a large business has long loans, support from the Reserve Fund and golden parachutes. A hundredth of this money would help small businesses a lot, equipment upgrades would help in import substitution, would help interrupt Chinese products. Will there be an opportunity to redistribute money for small businesses in order to spend more on production development? ”The Khabarovsk citizen asked.

The president noted that a number of tax and financial indulgences are in effect for this sector, and as for the "long money", "as a whole, they are not enough in the economy."

"With Titov, discuss what can be done for business in the Far East. I talked about the possibility of moving to the patent system, talking about benefits through the CBA funding program. And if there are proposals, I am ready to consider, "Putin said.

Earlier in the course of a direct line, the business ombudsman Boris Titov already proposed to the president to release private entrepreneurs from payments, since all small business in Russia gives the budget six times less than one Gazprom. Vladimir Putin instructed Titov to work out proposals more carefully, but noted that small businesses already have tax benefits, and pension and insurance are not so much a mechanism for replenishing the budget as they serve social stability.

Last year, one of the main questions of the Far Easterners addressed to the president on a straight line was the appeal of Tatyana Sedykh, editor of the newspaper My Coast, from the village of Vanino in the Khabarovsk Territory. She told Putin about the problems at one of the key timber processing enterprises the edge of the Arkaim - did not pay wages for working months, the company accumulated huge debts. Putin promised to understand that an interdepartmental commission arrived in the Khabarovsk Territory shortly after a direct line. Now the company is in a stage of bankruptcy, but the regional authorities say they found Chinese investor, Ready to buy out the enterprise together with debts and continue production.

"It does not live, it survives"

Photo of the house 86-year-old female veteran from the Trans-Baikal Territory showed the president of the "direct line". The photo of the dwelling in terrible condition was accompanied by explanations that this is how a veteran of the Great Patriotic War (WWII) lives.

As the presenter explained, the neighbors took a picture of the apartment and sent it as an MMS question to Putin. “We need to respond, let me,” the president asked to give him information.

It turned out that in the region so far only find out where the photo came from and who, in fact, this elderly woman. In the province 4882 veteran, but, as the presenter said, since the implementation of the decree on improving the housing conditions of veterans of the Second World War, only 4377 veterans have improved their living conditions. Currently, the Commission is considering an 21 statement, which will be met during April.

Natalia Vorontsova, a resident of Primorsky Krai, said that after a sharp rise in prices, the poor part of the region’s population “does not live, but survives.” According to RIA Novosti, the head of the region, Vladimir Miklushevsky, instructed the director of the regional labor and social development department, Liliya Lavrentieva, to meet with the woman and sort out the situation.

"The director of the department is to find out what the resident of the province was talking about, and if necessary, to provide assistance. In addition, if necessary, systematically develop special measures of social support for a particular category of citizens, "the agency's press secretary, Albina Okhrimenko, quotes.

Analytics The dilemma of "TORA or money"

Should Transbaikal be guided to the Far East