Notice: curl_setopt(): CURLOPT_SSL_VERIFYHOST no longer accepts the value 1, value 2 will be used instead in /home/admin/web/eastrussia.ru/public_html/gtranslate/gtranslate.php on line 101
 Chengdu: the birthplace of pepper and panda - EastRussia |
News February 27 2020
10:19 Fraudsters come up with a new taxi fraud scheme
09:29 Russia increased the supply of pollock in the United States
Primorsky Krai 08:51 Beneficiaries will receive additional support in Primorye

Yin and Yang of the Chinese hinterland 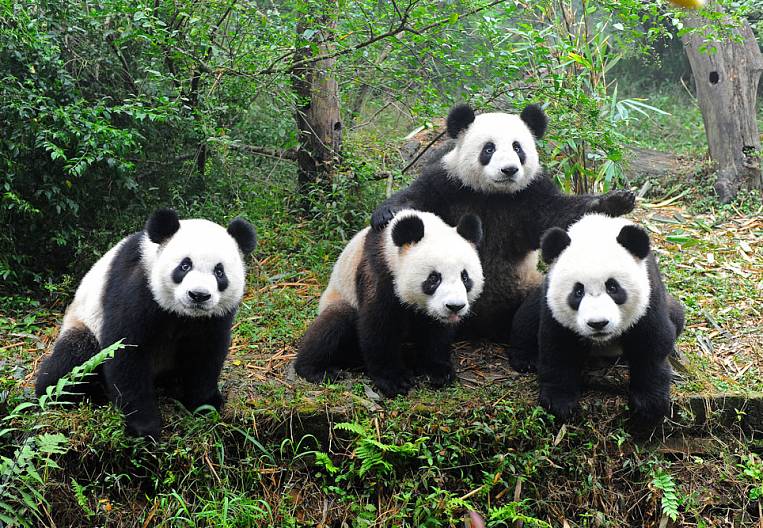 Photo: shutterstock.com
In a pot of boiling pepper broth of bright red one after another, various ingredients are sent: greens and vegetables, seafood, tree mushrooms, meat and fish, tofu, noodles ... A traditional dish of Sichuan cuisine - ho-go - shows the cultural diversity region whose history exceeds 3000 years.

The emblem of the city of Chengdu - "birds of the golden sun." A gold disk depicting four phoenixes flying around the luminary was found in 2001 during an archaeological dig. Today this image can be found almost everywhere, and its main meaning is the continuity of development and prosperity of the city, whose history has long since passed over two thousand years. And this is not just a motto, Chengdu, being the capital of one of the most densely populated provinces in China, is really growing rapidly, adding several districts a year.

Building from scratch, which is practiced throughout China, allows you to apply the most advanced building technologies and adhere to a comprehensive development plan: city authorities think through the entire infrastructure in advance, based on the fact that life in Sichuan capital should be modern, comfortable and healthy. New areas are being built with an eye to the future and environmental friendliness, surrounded by kindergartens, schools, hospitals, artificial gardening. They do not look uninhabited high-rise buildings on waste grounds, fenced in fences, but painted in bright colors, instead of fences - vegetation, fountains, sculptures. The point of environmental protection for China is especially important: concern for the environment is a new and very popular trend in the Middle Kingdom. 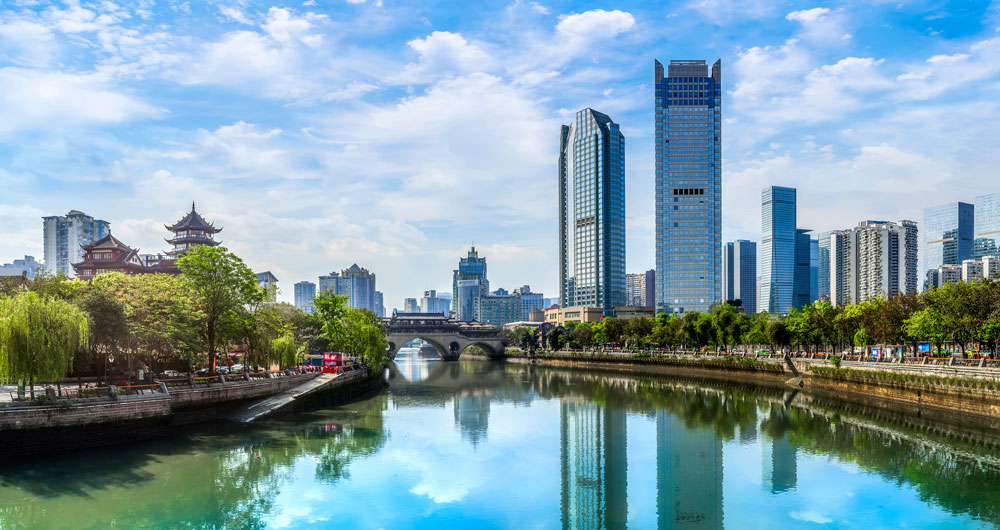 The fame of the ecological and "green" capital of China is added to the city by the fact that Sichuan is considered the home of the so-called "big panda" - the main national and diplomatic symbol. The province contains more 80% of the total population of these animals, there are several large nurseries for breeding rare animals. Tourists from all over China come to Chengdu to see with their own eyes these slow and good-natured bears at arm's length. For example, some travel companies even arrange “panda tours” when guests of the province can immerse themselves in real nursery volunteers for one day, caring for a panda and cleaning. The most wealthy tourists can even order a “photo with a panda”. All proceeds go to support the nursery. The queue in it is built since 7 in the morning, because at that time the pandas get their breakfast and are quite active. It should be noted that pandas are also an unofficial symbol of the province, the themes of these cute animals adorn the subway, buses, and even police offices, there are also themed panda hotels.

It would not be superfluous to note that the tourist potential of Szechwan is simply amazing: 3000 years were not in vain - in almost every village in the province you can easily find several monuments with a thousand-year past. Sichuan is located in the heart of China and has always been in the thick of things. The period of historic flourishing falls on the era of the Three Kingdoms (220 – 280), when Sichuan was part of the ancient kingdom of Shu.

Many of the memorable places here are associated with the ancient transport system - Shu roads, built in the 4 century BC. er On these roads, goods from other states were delivered to China and export deliveries went, partly here the famous Silk Road ran. The one who controlled the Shu roads, in fact, owned the entire mountain region and could control the trade, collecting customs payments. “It is easier to ascend to the sky than to reach Shu on the roads. / The mountains stand up in a chain, and only a meter to the sky remains, ”wrote one of the greatest Chinese poets, Li Bo, in the 8th century. Partly Shu roads are used today: some have turned into broadband highways, and others - into scenic hiking trails. On one of these paths in the crevice between the rocks stands the famous Jiangmen Outpost. It has existed for about two thousand years, and in the entire history the enemy has never been able to overcome it. They say that "if one husband defends the outpost, a thousand husbands will not pass." This tourist route is interesting from the point of view of the concept “one belt - one way”.

If you visit the usual bus station of Chengdu, then you can see all the variety of attractions on the map: the province is located in a very interesting geographical location, occupies part of the Qinghai-Tibet Plateau. Visiting Sichuan, you can get acquainted with the culture of the so-called "inner Tibet", in Chengdu even has its own Tibetan quarter, where you can buy real attributes of Tibetan temples. In the provinces you can see the ancient Tibetan temples themselves. It is convenient to use the visit to Chengdu for further visits to Tibet, which has become available in recent years.

To get acquainted with the history of the ancient kingdom of Shu and simply enjoy the dishes of spicy Sichuan cuisine in the region, 50 comes to millions of tourists annually. Surprisingly, in this number the share of foreigners is at the level of error. “We have a lot of foreign tourists,” says Yui's guide. “But almost all of them come from Vietnam and Korea, there are very few Russians.” And this is despite the fact that Moscow and St. Petersburg with Chengdu are connected by five direct flights per week (3 and 2, respectively). There are practically no empty seats in the cabin, but almost all passengers are Chinese, Europeans can be counted on fingers. This is due to the post-crisis change in the exchange rate: trips to Russia have become twice as accessible for the Chinese tourist, while visiting the land of pandas has become an expensive pleasure for the Russians. Previously, before the fall of the ruble, Chengdu held a leading position in the national tour with tour operators in China. 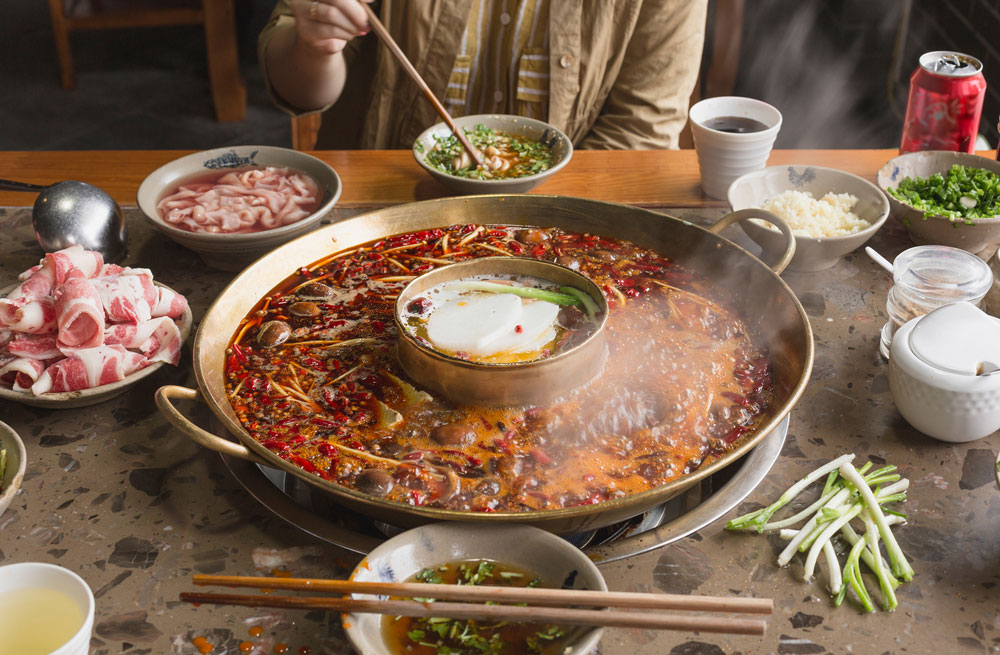 Nevertheless, all tourists in Sichuan are very happy: a large number of super-modern hotels, tourist centers have been built, numerous cafes and restaurants have been opened, there are English-speaking staff in many places. At the beginning of the year, a special office was opened in the city of Lanzhong to help foreign tourists, all of whose staff speak English. Another unique feature of this center is the extension of any type of visa - both tourist and business and educational. “Suddenly you want to stay with us a little longer,” explain the center staff.

For several years, China is among the ten most popular tourist destinations among Russians, ranking sixth (between Ukraine and Estonia): according to Rosstat, in 2018, Russian citizens made more than two million trips to the Middle Kingdom, slightly improving the performance of last year. However, the lion’s share of our compatriots today visits border cities using the visa-free regime, or goes to the capital of China - Beijing, while most of the neighboring state remains a “white spot” on the tourist map of the world.
Tags: China Chengdu Sichuan tourism panda кухня

37-th Moscow International Film Festival, although not attracted, for obvious reasons, special attention to world superstars, however, has become a very interesting event in Russian cinema. And above all, in my opinion, because the participation of China in it has become more visible. 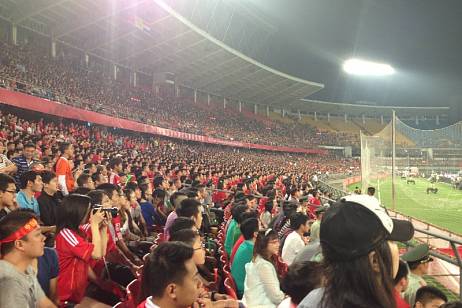 The strategy "One belt, one road" makes it possible to understand what is the future of China in Eurasia.