Notice: curl_setopt(): CURLOPT_SSL_VERIFYHOST no longer accepts the value 1, value 2 will be used instead in /home/admin/web/eastrussia.ru/public_html/gtranslate/gtranslate.php on line 101
 Waiting for floods - EastRussia | News Amur region
News January 24 2020
17:27 In Russia, they want to reduce the tax for receiving accumulated pension
16:04 Russian cadets will take part in the celebration of the Republic of India Day
Amur Region 14:17 Deadly coronavirus found in Heilongjiang

Waiting for the high water

Flooding on the Amur will pass without extreme consequences 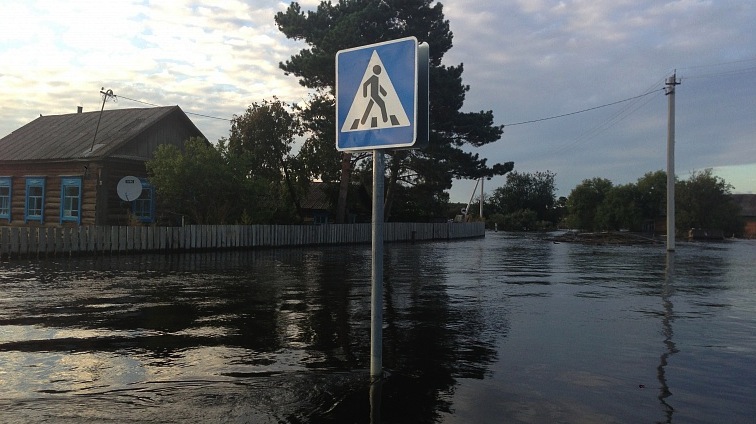 Hydrologists believe there will not be a large-scale flood on the Amur this year. Nevertheless, in the region, various options are being worked out, how to protect people from the consequences of possible floods.

Floods on the Amur this year do not foretell serious problems, such is the preliminary forecast of Roshydromet and the Ministry of Emergencies. Last week, Deputy Minister of Emergencies of Russia Vladimir Stepanov said that in the Far East "we do not forecast" such strong rains as last year ", therefore the region does not fall into the risk zone. Even earlier, the Far Eastern representative office disseminated information: according to the preliminary forecast of Roshydromet, the floods on the Amur River will pass in three stages, but without extreme consequences.

Scientists from the Far Eastern Branch of the Russian Academy of Sciences confirm official information, but are careful in their predictions.

“Floods on the rivers of the Far East, of course, will be in 2014. This is determined by the characteristics of the water regime of our rivers. However, accurate forecasts of the scale of such floods with a lead time of several months are basically impossible at the current level of science development, ”said Alexey Makhinov, Deputy Director of the Institute for Water and Environmental Problems of the Far Eastern Branch of the Russian Academy of Sciences. Therefore, it is impossible to say whether the conditions that led to the extreme flood in 2013 could repeat this summer.

“As shown by observations for more than a century, catastrophic floods have not been formed twice in a row. Therefore, the summer flood on Amur is unlikely to be particularly powerful, ”the scientist said. But to completely exclude the possibility of a large height of the Amur (up to 6 meters in Khabarovsk or so) does not follow.

The forecast of meteorological conditions for such a long period is impossible, the deputy director for scientific work of the Institute of Water Problems of the Russian Academy of Sciences Alexander Gelfan is sure.

"There are physically determined limits to the predictability of meteorological processes, and these limits are on the order of two weeks," he told EastRussia.ru. Therefore, it is difficult to guess whether the conditions that led to the catastrophic flood of the past year will repeat in 2014.

"Another issue is the assessment of the danger (probability) of such a repetition," A. Gelfan continued. - Judging from the available data for the period of instrumental observations in the Amur River basin, extraordinary floods in the monsoon season repeat here, on average, every 20 years. " But this does not mean that flooding can not happen again this year. Moreover, there are good reasons to talk about the ongoing changes in climatic processes, which lead to an increase and increase in the intensity of extreme precipitation.

In the Far Eastern Center of Hydrological Forecasts, the forecast was completely refused.

“We do not have such methods to say whether there will be a flood or not. The first predictions about the rise of water in the spring will be in early April, because everything depends on the rain, ”Natalia Yefremova, head of the hydrological forecasts department of the Far Eastern Hydrometeorology and Environmental Monitoring Department, told East Russia.

Despite the soft assumptions, scientists are looking for means to protect themselves from the consequences of possible floods in the future. Last week, the head of Roshydromet Alexander Frolov suggested using the old - shorter - channel of the Amur River to bring river water to the Tatar Strait. "The Amur River needs to be strengthened on the banks, it is necessary to assess the threats to the settlements. There is an idea, it must be carefully studied. There is an old historical channel of the Amur, about below Khabarovsk, it existed many centuries ago, before there were geological changes. This is a shorter exit to the Tatar Strait, about 300 kilometers shorter than the current route. And there is a proposal from geologists to dig a channel, perhaps to build a regulatory dam and thereby reduce the danger of flooding, "- quotes A. Frolov RIA Novosti.

It is assumed that 2-3 a million years ago, Cupid passed through the place where the lake is now Kizi, and fell into the Sea of ​​Japan. Its valley here was filled with lava, which with a dam blocked the river channel and sent a stream of water to the north, where Amur found a natural depression and began to flow into the Sea of ​​Okhotsk.

"Now in place of the former channel there are powerful layers of very hard volcanic rocks. Therefore, to pierce the canal in them, so that the whole Cupid can fit in the flood, now it will be insane, "A.Makhinov said. - Under this option, you can slightly reduce flood levels in the Amur within Udyl-Kizinskoy lowland, and Komsomolsk-on-Amur and Khabarovsk channel still does not help protect against flooding. "

Proposals to connect Amur with the Tatar Strait through Lake Kizi have been repeatedly expressed in the press, beginning in the mid-19th century. The main objective is to improve the shipping conditions for the entry of sea vessels into the Amur. "In the first half of the 20th century, a channel project with several locks was even developed. It is clear that the water regime of the Amur would not greatly affect this, "the scientist said.

By the way, the idea of ​​changing the Amur river bed is not original. Earlier, the deputy of the city Duma of Vladivostok Alexander Prikhodko proposed to change the channel of the Amur, "pushing" it just north of the current one. Thus, in his address to the President of Russia A. Prikhodko proposed to change the movement of sea currents, and, therefore, to improve the climate in Primorsky Krai. While the president did not support the initiative of the deputy.

Moscow scientists of the Russian Academy of Sciences put forward a less costly idea. According to A. Gelfan, it is impossible to prevent large-scale floods. You can only talk about what measures are needed to mitigate their consequences. A set of such measures is known: this is the creation of reservoirs, the reconstruction of existing and the creation of new protective hydraulic structures, measures for clearing the channels, managing the processes of their re-formation, insurance of the population against floods and resettlement of people to safe areas.

"What measures are most economically and socially effective in this case? This is a complex question, for which detailed research is needed. The Institute of Water Problems of the Russian Academy of Sciences was one of the first in Russia to initiate such studies. Their main result for today is the creation of a mathematical model that allowed to reproduce the development of the 2013 flood in the middle Amur, "A. Gelfan said. - With the help of the model it was possible, for example, to assess the role of the Zeya reservoir in reducing the flood wave and simulate what the wave height would be in the settlements of the average Amur (for example, in the city of Blagoveshchensk) in the absence of this reservoir. " Based on such models, scientists plan to create technologies for assessing the dangers of the forthcoming floods and predict floods on the Amur.

Another active participant in discussions on how to prevent new floods is JSC RusHydro. Last year, the company came face to face with powerful public pressure: it was difficult to convince citizens that the active discharge of water from the Zeyskaya and Bureiskaya HPP dams is first of all their protection against flooding. The proposal of RusHydro to mitigate the effects of floods is the so-called anti-flood hydroelectric power plant project, which was developed back in the 1990s. These hydropower plants are supposed to be built not on the Amur, but on its tributaries, which constitute the main flow of the Amur. Zeya and Bureya are regulated by hydropower plants, but many other rivers are not. It is not recommended to build hydroelectric power stations on the Amur River itself, because there is a risk of flooding large areas of useful land: The Amur is too full of water.

"If the flood begins, then all the hydropower plants are included in the work, restrain water, and the flooding passes more gently. In 2013, the flooding was largely due to the fact that hydraulic structures were not built on the rivers. Our proposal is to develop new dam projects, "East Russia spokeswoman Elena Vishnyakova told East Russia.

The government of Russia will make a decision about their erection (as well as in principle about the choice of one of the listed tactics). All projects are very expensive and it is necessary to solve the problem in a complex way.

The Far East is still unable to recover from the effects of last year’s flooding. So in Khabarovsk Territory about 600 families affected by the flood are waiting for the builders to build new housing instead of the flooded houses. So far, according to the information of the press service of the regional government, about a thousand people are forced to live in temporary accommodation centers. However, this is by no means the total number of people who have lost their homes, many of them live with their relatives.

В EAO more 300 families are waiting for the government to build houses for them. “The information has not been fully worked out, but now we are planning to build housing for 318 families, and this number may increase,” the acting official said. Head of the Architecture and Urban Planning Department of the Jewish Autonomous Region Viktor Korenev. 315 people are now housed in the temporary administrative centers of the JAR, 52 are still living in the Krasnodar Territory (sanatorium “Small Bay”), six people live in Far Eastern sanatoriums.

В The Amur Region 307 people are in temporary accommodation. 840 people need to be provided with housing. According to the press service, this number also “floats”. “After the flood, many people were dissatisfied with the assessment of the state of their housing by independent commissions. For example, a person believes that his house is no longer habitable, and the commission is confident that the room only needs to be renovated. These people are now leading litigations and it is likely that many of them will sue new apartments for themselves, ”said Victoria Davyskiba, an employee of the Amur region government press service.