Notice: curl_setopt(): CURLOPT_SSL_VERIFYHOST no longer accepts the value 1, value 2 will be used instead in /home/admin/web/eastrussia.ru/public_html/gtranslate/gtranslate.php on line 101
 Olonkho land multiplied gradually: What prevents the development of Yakut cartoon, found out EastRussia - EastRussia | News The Republic of Sakha (Yakutia)
News 04 April 2020
03:00 Coronavirus in the Far East: information on the morning of April 4
03 April 2020
The Republic of Sakha (Yakutia) 15:37 To reduce the down payment on the Far Eastern mortgage offer in Yakutia
Khabarovsk Krai 15:14 Duty groups will open in kindergartens of Khabarovsk

What prevents the development of Yakut animation, finds EastRussia

The phenomenon of the Yakut cinema is known for a long time: movies shot in the frosty republic are shown in one region of Russia, then in another, and at once three Yakut films go to the Berlin International Film Festival in February. With animation, things are not so rosy: the budgetary millions for its support are not yet allocated, and the pictures themselves, even if translated into foreign languages, are removed by enthusiasts, in parallel, teaching children's animations. EastRussia figured out what the success and what the Yakut animators were wrong about. 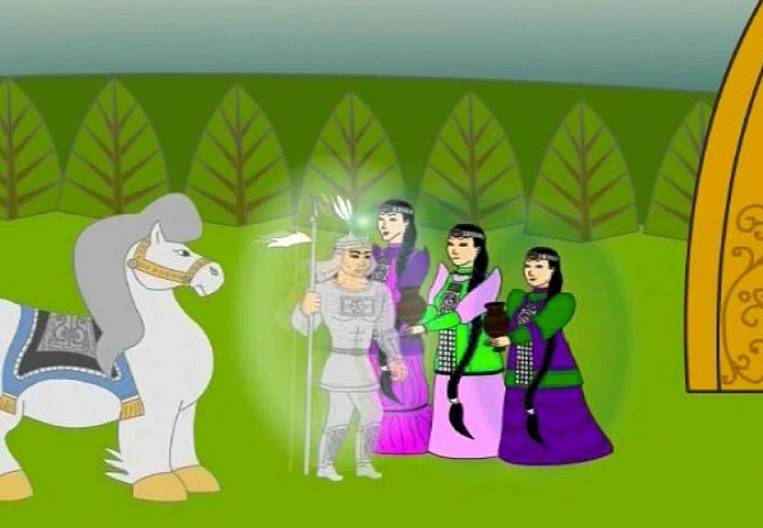 Photo: Still from the cartoon Nyurgun Bootur Swift
Movies in Yakutia generally like. A year ago, the Ministry of Culture and Spiritual Development of the republic asked for more than 300 million rubles to hold a Russian cinema in Yakutia. Interest in the cinema is experienced not only by officials, but also by the audience - during the screenings of Yakut films the cinema halls are full and for the second week, and even for the third. With animation, everything is more complicated.

If you look optimistically, Yakut cartoons go out all the time. There was even a full-length picture called "Nurgun Bootur the Swift." 50-minute cartoon is based on the folk epic of the Yakuts Olonkho, recognized by UNESCO as a masterpiece of the intangible cultural heritage of mankind. The painting was released in the Yakut language and translated into Russian, English, German, Chinese, Japanese and Korean. They removed the cartoon on the initiative of the Museum of Music and Folklore of Yakutia. When asked about the budget, scriptwriter Maria Kornilova laughingly replies that she started out on bare enthusiasm. "We had an idea, and we began to implement it." When the work was already under way, people's deputy Alexander Zhirkov helped us, "she said.

The main goal of the creators of the cartoon is to introduce as many people as possible to the epic of Olonkho. They embodied this noble idea, that is called, by the whole world. Background - birds singing, neighing horses, screams of evil spirits-abassas - voiced by students of the local college of culture. The teachers of the North-Eastern Federal University, which is based in Yakutsk, were engaged in the transfer. Work on the cartoon began in 2008 year. A year later they submitted a draft version, in 2010-m they showed the Russian version. Two years later the painting was translated into foreign languages. The paradox of "Nurgun Bootur the Eager", filmed in Yakutia based on the same epic, is that in the original language it was presented only in December 2015.

After "Nurgun Bootura Rapid" the Museum of Music and Folklore has issued several more similar projects. "We call it video artifacts.The folk epic needs material embodiment, because it can not be hung on the wall like a picture, or felt like a book." Inspired by the feature film, we also prepared several shorts and popular science films with game elements, - says Maria Kornilova. For example, in November this year the museum presents the first puppet cartoon film on the Evenki heroic epic (Nimngakan) under the name "Hurugochon., The Bird Son." "We received a grant for the production of dolls from the Ministry of Culture and Spiritual Development of the Republic.The dolls are ready, they were made by the teachers of the college of technology and design," she says.

The animator of the new painting is Anna Sleptsova, who created "Nurgun Bootura the Swift". After studying at the St. Petersburg Institute of Film and Television, she returned to Yakutia at 2009. "I did not like the weather in Petersburg, and the roots were pulled back," the animator admits. Now Anna works at the Palace of Children's Creativity in Yakutsk, teaches children to create cartoons. "Why did I go to teach? Because the creation of cartoons in Yakutia, you will not earn money, "says Anna Sleptsova." The problem of animation in Yakutia is the lack of personnel. We with children once decided to count how many cartoons we have. There were only twenty. "

However, the animator is full of enthusiasm. "In the animation studio, in addition to me, there is another teacher, her name is Oksana Vasilieva.We have created this circle together in 2013.Now we have about 70 children.Last year we held a cartoon festival.The works were sent from different parts of Yakutia, It was very nice to see, so we plan to hold it this year, in April, "she says of the plans.

Anna and Oksana are not the only ones in Yakutia who teach children animation. Back in 2012, the film-miracle film animation studio opened in the capital of the republic. The initiator was the charity fund for children with disabilities "Kharyshal" ("Charm"). The creation of the studio was inspired by communication with the participants of the Petersburg studio "Yes", who came to Yakutsk with a master class. Then everything went like a good movie: the leadership of Kharyskhala became interested in the idea of ​​performing art therapy for the wards, but there was no person who could create cartoons. And Peter Nikolaev, an animator-amateur who had previously worked in one of the cinemas of the city, appeared burning with the thought of helping children.

Now in the "Miracles of Cinema" studio 20 children are engaged. Young multipliers from 7 to 14 years. Together with Peter Nikolayev with the guys engaged Irina Dyakonova. She also came to the animation by trial and error. In addition to working with children in Yakutsk, Peter went to the regions of the republic with master classes. For three years, the organizers of the project have been conducting a national festival of children's animated films "Wonders of Cinema". This time it will be held at the end of May. In 2016, more than 80 works were sent to the contest - it was the record of the festival.

Wait for the development of the contest is from what: last year one of the republican colleges released animation teachers. That is, in the republic, in which it is too early to talk about the large-scale development of animation, eight educator animators have already been released, not in Yakutsk, but in the village of Namtsy - in 83 km from the capital. "The guys are good and well versed in the programs, maybe in two years we'll hear about them," Anna Sleptsova believes.

Strictly speaking, college graduates will not be the first teachers-animators of Yakutia. Even in the "zero" in the republic from Moscow came Robert Labidas. Having finished the higher courses of animation scriptwriters and directors in the capital and spending a couple of years in studios in Moscow, the young man returned to his elderly mother in Yakutsk. His ideas were not in demand, although the republic itself directed the study of Robert. Work for a young specialist with capital experience was not found.

"I thought that I would create an animation studio, I would learn new personnel for the republic and make cartoons based on Yakut fairy tales and legends. Why exactly folklore? It inspires me, our folk art is a treasure trove of ideas," says Robert Labidas. To the question why in the republic, where millions are allocated to the creation and development of cinema, he doesn’t pay attention to the cartoon art, he responds with a noticeable annoyance in his voice: “Creating a cartoon takes more time and money. Some Yakut films 300 is a thousand rubles. And we have another story - to make a picture lasting about 15 minutes, you need to invest about three million. " Despite the lack of government support, Labidas creates cartoons. True, more often for other regions and countries than for Yakutia. Among his paintings are the Karas Mosquit carp at the festival "Cinema of the Arctic" and the cartoon "Circulation" marked at the festivals "Saint Anna" and "The Sky Horse".

The theme of the Yakut epic also inspires Oktyabrina Potapova from Soyuzmultfilm, born in Yakutia, and now working in the capital. For example, her picture "Once Upon a Time" was created in 2002 on the motives of a fairy tale about the adventures of the brothers-hunters Torobos and Tasynas. Five-minute cartoon participated in the film festival "Suzdal-2003". But this animator is a representative of the Russian rather than the Yakut school. Among her other works are "The New Adventures of Grandma Ezhki" (2008) and "The Whole Girl" (2013). She - an adherent of the old school: draws by hand, reviving every frame, not afraid of scrupulous work.

Meanwhile, the multipliers in Yakutia are sometimes supported, but entirely from unexpected sources. "When I was working on the film" Samenchik djollooh kune "(in the translation from Yakut" Happy Samenchik's Day "), I was financially supported by the Ministry of Agriculture of Yakutia, which sounds strange, but I turned to them because the film touches on the theme of rural life. Offensive that I still was in the red, "- says the young animator Olga Stepanova. And in 2015, she took part in the online contest "People's Budget" and received grant support from the administration of Yakutsk: 80% of the funds needed to create a cartoon. Last year, with popular support and with the help of her team, the girl presented three parts of the cartoon that tells about the city of Yakutsk.

Olga Stepanova does not stop at this: working on the order, she is simultaneously developing a new project. "One does not interfere with one another, and you always want to eat," jokes the animator. "Plus, my author's project is still at the stage of development of the idea." Such a comment, if you think about it, approaches the assessment of the state and the entire animation industry in Yakutia. There are professionals in it, they are in demand outside the republic. But the creation of cartoons in Yakutia has not yet earned. That's the whole conversation.
Tags: Yakutia Olonkho culture animation cinema traditions

37-th Moscow International Film Festival, although not attracted, for obvious reasons, special attention to world superstars, however, has become a very interesting event in Russian cinema. And above all, in my opinion, because the participation of China in it has become more visible.