Notice: curl_setopt(): CURLOPT_SSL_VERIFYHOST no longer accepts the value 1, value 2 will be used instead in /home/admin/web/eastrussia.ru/public_html/gtranslate/gtranslate.php on line 101
 Andrey Pushkarev, General Director of Vostokcement: “Rising prices are below inflation” - EastRussia |
News 01 April 2020
Jewish Autonomous Region 14:50 Quarantine mode introduced in EAO
Jewish Autonomous Region 14:22 The supply of 500 thousand medical masks from China is expected in the EAO
14:05 Symptoms of a coronavirus concern those who apply to the Sberbank hotline

The head of Vostokcement: "The rise in cement prices is below inflation"

The general director of the group of companies "Vostokcement" Andrey Pushkarev spoke about the integration of "Yakutcement" into an industrial group and how the corporate policy of the company allows to build long-term relationships with consumers.

- Andrei Sergeevich, the latest consolidation of Vostokcement is connected with the acquisition of a large asset in Yakutia - the Yakutcement company. Since then, the company controls all large cement enterprises in the Far Eastern Federal District. How was the decision made to enter Yakutia?

- The deal on the plant in Mohsagolloch took place at the end of 2011. In October, 2011 started negotiations with the previous owner, and in December a deal was concluded. Soon there will be an anniversary - three years. We went the whole group (the management of the management company and the managers of our two other cement plants - Spasskcement OJSC and JSC Teploozersky Cement Plant), got acquainted with the plant, the team, the personnel, with the papers, and did the due diligence, as they say now. We appreciated, looked, we liked everything. And the equipment, and the quarry, and the general factory - all produced a decent impression.

- What changes are coming “Yakutcement”? Everyone is waiting for the new owners to bring some elements of modernization there.

- At the time of our arrival and right after it on the "Yakutcement" for the worse nothing has changed. This issue worried everyone very much, from the director to all the other indifferent people. We did not reduce salaries. Moreover, for three years that we are together, the salary of employees has grown by more than 30%. There were 37 thousand rubles, and today it is already 49 thousand. The number of jobs increased by almost 10%: there was 712, now - 779. The social program: everything that was prescribed by law, and what was beyond it was at the enterprise, everything was preserved.

As for the innovations, over these years, together with Yakuttsement, we began to implement a number of organizational and technical measures at the plant. Last year, we made a so-called pinch, that is, modernized the furnace. The factory dreamed about it for several years, tried to do it, but lacked the means, the finance. And last year the furnace was made. 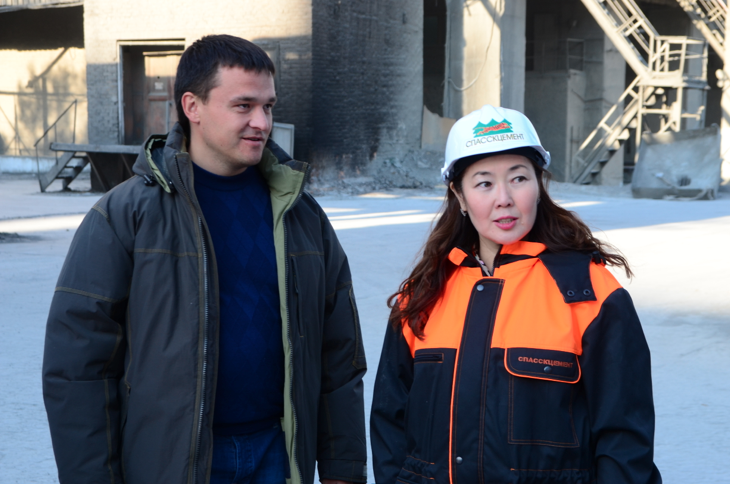 - How much do you estimate the investment in the Mohsogollohsky plant?

- If in the 2011 year before our arrival, Yakutcement did not make almost any investments, then already in the 2012 year we invested 76 million in the modernization of production. In the 2013 year - 125 million, in the 2014 year for 8 months - 78 million. All three years there have been investments, and not small ones. We changed the technological transport. If old BelAZs used to drive, now - modern Volvo dump trucks. And many other necessary things, I will not list everything. Sounds sounded, I believe, a good indicator.

Today we are launching another major investment project at Yakutcement, the construction of a third furnace. Now two furnaces give about 330 thousand tons of products, with the construction of the third furnace we intend to bring the plant's capacity to half a million tons. The project has already begun, it has been announced, you can see at the factory - what, where, how it happens, how the sites are prepared. We estimate the cost of the project at 1,5 billion rubles and plan to put new capacities into operation at the beginning of 2017.

- The republic will master these half a million tons? Or do you plan to export products to other regions?

- Today Yakutia consumes just about half a million tons of cement, of which somewhere 330 thousand is produced by "Yakutcement", the rest is delivered. And the lion's share is imported from the company "Spasskcement", which is part of our group of companies. Also deliver Timliuisky (Republic of Buryatia, part of the holding company "Siberian cement"), Angarsk (Irkutsk region), Sukholozhsky plant (Sverdlovsk region, enterprise of the international group of companies BUZZI UNICEM) factories. Accordingly, our investment project will significantly optimize the supply of cement to the market of Yakutia, reduce the cost of logistics.

- The lack of cement in Western Yakutia is forcing oilmen, gas workers and diamond workers to turn to enterprises in the Irkutsk region and not only. How do you plan to work with the company "Alrosa", for example?

- The recipe is absolutely simple. "ALROSA" is a client, and the customer is always right. We just try to satisfy the needs of the client. And they have what? First, the client needs cement to be in the right place at the right time, and at an acceptable price for it. We give a good price, we make high-quality cement and clinker, we carry out proper and correct logistics. That's all.

- Of course, a lot influences the price. And those of your investments, costs will surely be a burden on this price. And what is happening now with the exchange rates ... How will you protect the prices for your customers?

- In terms of pricing, everything is predictable, and customers know what prices will be tomorrow, the day after tomorrow, in a year or two. If we take the statistics, then in three years that we, together with Yakutcement, the price has grown on average 5% per year. Next year we are planning an increase of 4%. And this is despite the fact that inflation in 2012 is 6%, in 2013 is 6,5%, the forecast for 2014 is 8%. The following year, the government announced 7,5%.

- This is actually a very valuable knowledge, because a square meter in the city of Yakutsk is more expensive by leaps and bounds. A standard studio apartment, under 40 square meters, in Yakutsk already costs 4 million rubles. Developers nod at rising prices for cement, electricity, labor.

- In one square meter of housing, the average cube of concrete is on average 400-450 kg of cement. In terms of the price of "Yakut Cement" - this is about 2-3 thousands of rubles.

- Tell me, where does Yakutcement pay taxes now, after a change of ownership?

- The legislation of Russia is one, and the owner does not affect the place where taxes are paid. That is, where Yakutcement paid, it continues to pay there. The only difference is that we began to pay more taxes. Somewhere interest on 20-25 with us all these three years, tax deductions have grown, including the income tax. That is, if Yakut Cement was either zero profit or negative (2011 year before our arrival - minus 2011 million) before 31, then 2012 year we showed 101 million profit, 2013 th - 92 million, 2014 th - we plan 200 million. And the profit tax is 20%. Plus other taxes - this is also an increase. 10, 15, 20% for different types of taxes, that is, every year we increase tax payments.

- In what other regions are the enterprises of Vostokcement?

- In the Far East, three cement plants - Spasskcement (Primorsky Krai), Teploozersky Cement Plant (Jewish Autonomous Region), Yakutcement (Republic of Sakha (Yakutia)). All of them are included in our group of companies.

- What are your company plans for the next five years?

- Our main strategy is to develop existing enterprises. She was, is and will be. We did not have Yakut Cement in our strategy in 2009-2010, there was no goal to come to the region. The circumstances were such that Yakutcement became a part of our large team.

- In terms of technology, the most advanced enterprise - Spasskcement?

- Here, in Spassk-Dalniy, we have used very interesting and advanced technologies. For example, we can recycle waste. In particular, our production facilities allow us to utilize ashes from coal-fired boiler houses. This is a modern trend. Advanced plants in Japan, Germany use the maximum waste in their technology.

- In Spassk-Dalny everything started with the technological lines supplied by the Germans. In Russia at that time, probably, there was nothing at all of his own. And today, which manufacturers do you mostly prefer?

- If we talk about high-tech equipment, then, of course, in the priority - a foreign manufacturer. All the electronics we have from Germany.

- A high level of automation involves special training of people who work on this equipment. Where do you prepare the shots?

- We have specialized personnel that work specifically in cement production, they are prepared by the Belgorod Technological Academy (now - Belgorod State Technological University named after VG Shukhov). These are the main engineers. And further training takes place directly at the factory. We have our own training class, there are teachers. There is a whole program. Last year, we trained 1200 employees on this program, they all received advanced training.

- Where do Yakutcement specialists undergo such training?

"They also have their own training program, and I know that many specialists from Yakutcement have graduated from the same institutes, Belgorod, for example.

- Are there currently such guys who are trained at their own expense by the company?

- Of course, 30 people are trained in different institutes. We send them at our own expense to study technical specialties.

Are these your fellows or your future cadres?

- Those who are by correspondence are our employees who are already working for us. There is also a personnel reserve program, where specialists themselves seek to improve their education. And on the full-time department, the children of our employees study, whose parents want them to return to the factory.

- Previously, everyone studied only for teachers and doctors, and now they already understand that production and salary are higher, and growth prospects and careers are better.

- Promising directors also want the children of their employees to learn. Because we now know that the state of the plant depends on the qualification of the worker: technical - they will offer something new, economic - any enterprise works for making a profit. No one would work in the enterprise if there was another incentive, it is the cost price. Only people can make some kind of innovation to make the enterprise competitive. Therefore, we are only for the fact that people receive education.

In the city of Yakutsk, according to February 2014, about 40 business entities are building housing facilities (approximately 70 housing projects under construction). At the same time, according to the data of the Territorial Body of the Federal State Statistics Service for the RS (Y), the average price is 1 sq. m in the primary housing market of all types of apartments in the Republic of Sakha (Yakutia) in the IV quarter. 2013 of the year amounted to 55 243,90 rubles.

Interview Peter Fradkov: rockets - they know, but shampoos - no

Sergey Khotochkin, General Director of the Corporation for Development of the Sakhalin Region, spoke on the fields of the WEF in a conversation with EastRussia about the everyday life of the Corporation and its first investment projects