Notice: curl_setopt(): CURLOPT_SSL_VERIFYHOST no longer accepts the value 1, value 2 will be used instead in /home/admin/web/eastrussia.ru/public_html/gtranslate/gtranslate.php on line 101
 Activists propose abolishing Ministry of the East - EastRussia | Far East
News January 18 2020
The Republic of Sakha (Yakutia) 10:33 A private concessionaire was chosen for the construction of a bridge across the Lena
January 17 2020
17:43 Banks reduce mortgage requirements
14:30 Putin's rating increased after the announcement of the message


Irkutsk Region 07:08 4 billion rubles will be required for the resettlement of floaters in the Angara region
06:46 The human factor could cause an emergency with SSJ 100 in Domodedovo
More news
Media News2
HOME News 16.05.2019 02:16 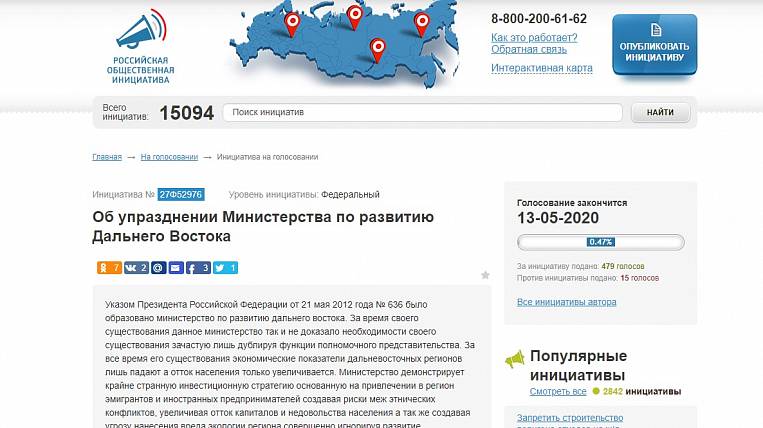 A petition on the abolition of the Ministry for the Development of the Far East and the Arctic appeared on the Russian Public Initiative website. The author of the document considers the activities of this department meaningless, and often harmful.

As noted in petitionsDuring its existence, the Ministry of East Development did not prove the necessity of its existence and often only duplicated the functions of the plenipotentiary representation. The author of the document notes that during the existence of the Ministry, the economic indicators of the DFO regions only fell, and the outflow of the population increased.

The author of the petition was also dissatisfied with the attraction of emigrants and foreign entrepreneurs to the Far East. Such measures, in his opinion, create risks of interethnic conflicts, as well as increase the outflow of capital and public discontent.

Now about 500 people voted for the elimination of the Ministry of Eastern Development, 15 voted against. According to the author of the petition, the abolition of the ministry will save budget money and prevent great damage to the economy of the DFO regions.

Ministry of Eastern Development and Trade: Cargo transportation along the Northern Sea Route will amount to 160 mln tons