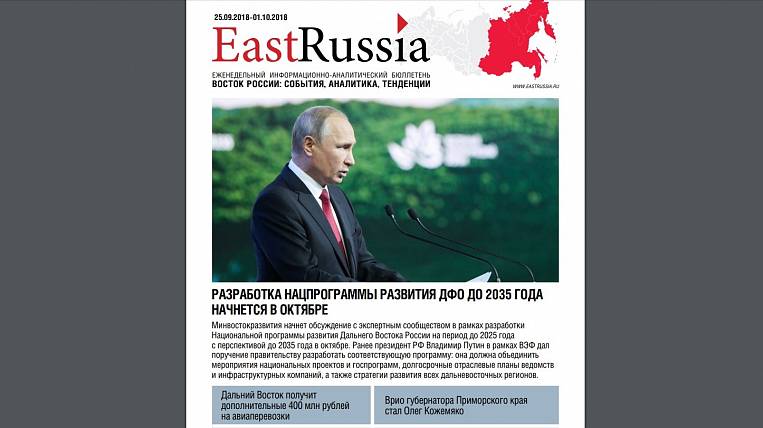 Photo: EastRussia
The creation of large agro-industrial clusters is planned in the Primorsky and Khabarovsk Territories. Thus, the owner of the coal terminal in the seaside port of Nakhodka, Transhimexport LLC, intends to invest more 42 billion rubles in the creation of the Port Suchan agro-industrial cluster, the latest published issue of the EastRussia bulletin says.

The corresponding agreement was signed on the margins of the WEF. The details of this project, however, have not yet been disclosed. Earlier, the same investor announced plans to build a grain terminal in Nakhodka.

Foreign investors also plan to work in the same direction - the Chinese company Dongjin Group plans to invest 120 million USD in a project to create an agro-industrial cluster in the Khabarovsk Territory, as well as in the development of the integrated transport corridor “Far East-1” (from Khabarovsk to the province). Heilongjiang). The corresponding agreement of the Dongjin Group, the Agency for the Far East to attract investment and support for exports (IPA) and the ANO "Regional Agricultural Fund", which provides support to agro-industrial investment projects in the region, have signed at the WEF.

The project, which is supposed to be implemented within the framework of the Khabarovsk TRA, envisages the construction of a specialized sea port in the region for transshipment of agro-industrial goods with a capacity of 400 thousand tons per year, putting into circulation ten thousand hectares of agricultural land, developing the infrastructure of the agro-industrial complex for 100 simultaneous storage thousand tons of agricultural products. It should be noted that the Dongjin Group already grows vegetables and oilseeds in the region. The total area of ​​agricultural land of the company is about 30 thousand hectares, and the amount of actually invested investments is 30 million USD.

In turn, the Primorsk company LLC Alekseenikolskoe intends to create a complex for growing cattle, grain, soybeans and fruits in the vicinity of Ussuriysk. The investor has already applied for the status of a resident of SPV The realization of the products of the complex is supposed to be carried out on the territory of the exhibition complex, the construction of which is also provided for by the project.