Notice: curl_setopt(): CURLOPT_SSL_VERIFYHOST no longer accepts the value 1, value 2 will be used instead in /home/admin/web/eastrussia.ru/public_html/gtranslate/gtranslate.php on line 101
 EastRussia Newsletter: Mechel plans to increase exports of Yakut coal - EastRussia | Far East
News February 23 2020
22:50 MTPL policy fell by 2,8%
Khabarovsk Krai 22:21 Sturgeons seized 80 million rubles from poachers in the Khabarovsk Territory
The Republic of Buryatia 21:59 Coronavirus suspected of a resident of Buryatia 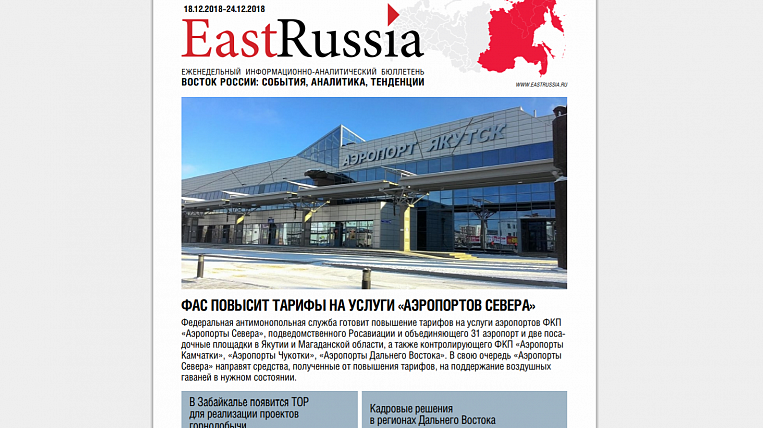 In the fuel and energy sector, important events of the past week are related to coal mining - coal mining results for 11 months of 2018 in Transbaikalia were summed up, and Mechel’s plans to increase exports of Yakut coal are discussed, the latest issue of the EastRussia bulletin says.

In the Trans-Baikal Territory, coal production in January-November of this year corresponds to the level of the same period last year. During the reporting period, the region’s subsoil users mined about 20 million tons of coal. A significant amount of production is traditionally provided by the enterprises of JSC SUEK.

At the end of the year, it is expected that the region will achieve production in 21 million tons. At the same time, SUEK expects to produce more than 5,9 million tons, exceeding 15 of the year by 2017%. The rest of the volume is provided by different companies, whose individual production volumes are lower than those of SUEK.

In addition, Mechel PJSC extended the contract for the supply of coal with a Chinese corporation that produces cement Jigdong Cement, until the end of 2019. The company intends to supply up to two million tons of thermal coal from the enterprises of LLC Elgaugol and JSC Yakutugol Holding Company, while the monthly volume of deliveries will be 100-150 thousand tons. Deliveries by the end of this year are expected at the level of 1,4 million tons, which is slightly less than a year earlier.

It should be noted that Jigdong Cement today is the main recipient of Elga coal in the APR. Mechel and Gazprombank (owns 49% in the project) expect to attract an investor in the development of Elga, including considering Chinese metallurgical companies.