Notice: curl_setopt(): CURLOPT_SSL_VERIFYHOST no longer accepts the value 1, value 2 will be used instead in /home/admin/web/eastrussia.ru/public_html/gtranslate/gtranslate.php on line 101
 EastRussia Bulletin: Chamber of Accounts criticizes Big Stone funding - EastRussia | Far East
News February 22 2020
Khabarovsk Krai 13:21 The case of the former deputy chairman of the Khabarovsk Territory was brought to court
09:00 Experts named the regions with the highest rental prices
08:15 Expectant mothers will be saved from bureaucracy with patrimonial certificates

EastRussia Bulletin: The Court of Auditors criticized the financing of the Big Stone 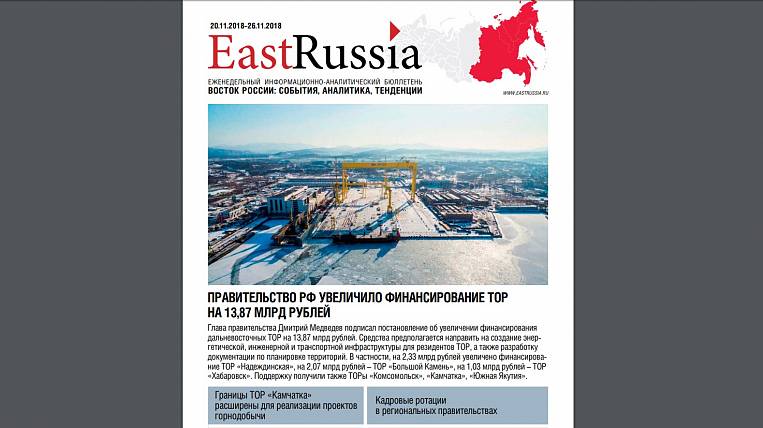 The Board of the Accounts Chamber criticized the Ministry for the Development of the Russian Federation in connection with the situation in certain territories of the Primorsky Territory. We are talking about the budget support of the city district of Bolshoy Kamen, where, within the framework of the same name for TOR, a large project of the Rosneft consortium, Rosneftegaz and Gazprombank - the Zvezda shipbuilding complex is being implemented, the next issue of the EastRussia bulletin says.

Issues of development of the Bolshoi Kamen were discussed during a working visit to the city district of interim governor Oleg Kozhemyako. According to the auditors, the removal of the CATF regime in 2015, which gave the city about 500-600 million rubles of federal subsidies annually, was carried out in the absence of the necessary analysis of the socio-economic consequences, and in planning the development of the urban district, taking into account the Bolshoi Kamen established in 2016 year. ”(Anchor resident - Shipbuilding complex“ Zvezda ”) there is no integrated approach. In addition, in the Accounts Chamber they draw attention to the fact that the Ministry of Eastern Development has not yet prepared a plan for the development of the district and has not carried out an assessment of the effectiveness of the TOP. This year, the authorities of the Big Stone estimated the deficit of funds in 344 million rubles.

The head of the urban district, Andryukhin, appointed to office in July 2018, reported that the revenues of the city budget with complete deprivation of ZATO status decreased by 30%, the city suffers losses due to the allocation of a significant part of the land fund for TOP projects, and the municipality’s budget additional burden on the provision of social and personal services for visiting shipbuilders. In this regard, the head of the city asked for an increase in the period of the transition period from the closed city regime until the time when the main resident of the PDA works at full capacity.

Acting head of the region Kozhemyako, in turn, promised that the regional authorities will support the city district in the repair and modernization of the municipal, road, educational and medical infrastructure, and will also facilitate the signing of an agreement between the city and residents of the PDA on compensation for damage to the municipality maintained by the municipality construction.