Notice: curl_setopt(): CURLOPT_SSL_VERIFYHOST no longer accepts the value 1, value 2 will be used instead in /home/admin/web/eastrussia.ru/public_html/gtranslate/gtranslate.php on line 101
 EastRussia Bulletin: The joint venture revealed violations at the Kolyma construction sites at 156 million rubles. - EastRussia | Far East
News February 19 2020
Khabarovsk Krai 07:19 Ex-deputy of Zakuma has become an adviser to the governor of the Khabarovsk Territory
Kamchatka 07:02 Flights to Kamchatka may rise in price due to a new terminal
06:37 Bank of Russia: inflation continues to decline in the Far East


Khabarovsk Krai 06:16 Ex-official in Khabarovsk will be sent to court for spending on business class
The Republic of Buryatia 06:00 SARS Epidreshold exceeded in Buryatia
05:39 Putin dismissed Surkov from the post of his assistant
Chukotka 05:18 The “daughter” of the Far East Development Corporation was created in Chukotka
05:00 The Russian Railways did not agree to accelerate the modernization of BAM and the Trans-Siberian Railway


Khabarovsk Krai 04:41 A group of workers from China were quarantined in the Khabarovsk Territory
Sakhalin Region 04:18 Trutnev instructed by May to eliminate violations in the "Mountain Air"
04:00 The regions of Siberia and the Far Eastern Federal District have been allocated money for fire fighting equipment
Irkutsk Region 03:39 Fair Russia decided on a candidate for mayor of Irkutsk
03:22 The second Russian was hospitalized because of the coronavirus on the liner


Trans-Baikal Territory 03:07 Food prices are expected to increase in Transbaikalia due to the closure of borders with China
02:51 The rise in housing prices in the Far East will study the federal authorities
Sakhalin Region 02:34 Trutnev against: there will be no cottage community on Mountain Air
02:02 Russia will suspend entry for Chinese citizens
Primorsky Krai 00:14 New flight will connect Vladivostok and Tokyo 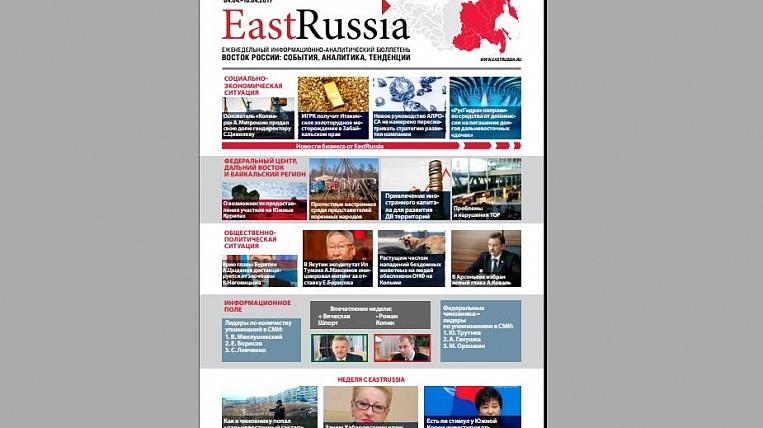 Photo: EastRussia
The Chamber of Accounts found violations for 156 million rubles. on construction sites in the Magadan region, the latest issue of the EastRussia bulletin says. We are talking about violations in the development of public funds, which were allocated for the repair and construction of dams, as well as reservoirs.

In particular, without supporting documents, the construction department of the Magadan City Hall and the administration of the Olsk district paid freight transportation for 45 million rubles. Without documentation, the administration of the Olsky Okrug also paid for the uprooting of 11 thousand trees on the dam. Moreover, the officials promised to supply the sawn timber to the population, but this was not confirmed.

Demonstration was also the construction of a dam on the Seymchan River. The initial value of the contract was estimated at 218 million rubles, the commission had to choose their two participants in the auction, which offered the same price - 171,2 million rubles. The winner was recognized as LLC "Kasakh", but during the audit it was found out that the company had no right to participate in the auction. In addition, from the budget was sent 300 million rubles. on bank protection, as gold mining on the rivers of Berelekh, Susuman and Ust-Omchug threatens floods, but the problem of the emergence of emergency is still not solved.

A detailed analysis of this and other relevant topics can be found in the weekly bulletin EastRussia (https://www.eastrussia.ru/subscribe/).
Tags: EastRussia Bulletin Chamber of Accounts Department of Construction of the City Hall of Magadan Prosecutor General's Office Vladimir Pechenyi
Related News: