Notice: curl_setopt(): CURLOPT_SSL_VERIFYHOST no longer accepts the value 1, value 2 will be used instead in /home/admin/web/eastrussia.ru/public_html/gtranslate/gtranslate.php on line 101
 EastRussia Bulletin: a small refinery will be restarted in the Irkutsk region - EastRussia | Far East
News January 27 2020
Magadan region 16:31 The new Mi-8 helicopter received the Magadan region
Sakhalin Region 16:20 Former bribe convicted former head of Korsakov on Sakhalin
16:09 Ministry of East Development will evaluate the effectiveness of the Far Eastern governors

EastRussia Bulletin: a small refinery will be restarted in the Irkutsk region 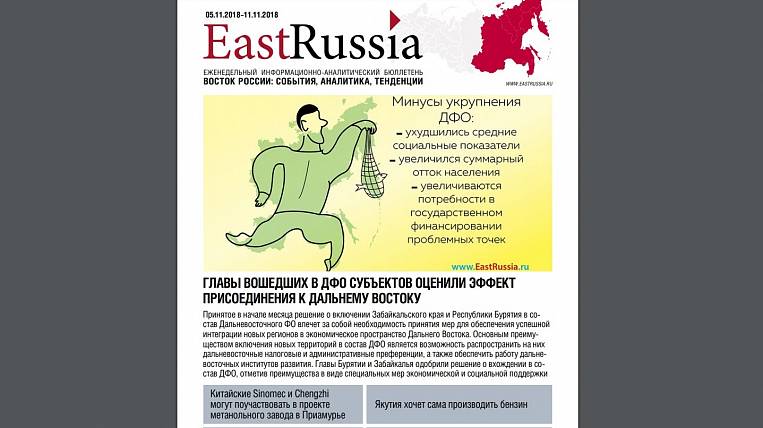 In the fuel and energy sector, the main events of last week concern plans to create a new refinery in the Irkutsk region, as well as the development of the energy infrastructure of the Power of Siberia gas pipeline, the latest published issue of the EastRussia bulletin says.

LLC MFC Capital, registered in Krasnoyarsk, and one of the major Russian independent traders of oil products of Solid Product Markets OJSC, announced the planned restart of the refinery in Angarsk of a small plant CJSC Diteko, which was shut down two years ago. of which bankruptcy proceedings were introduced in 2017.

MFC Capital LLC bought out Diteko property at the beginning of this year and since that time has been preparing production for launch, having invested about 500 million rubles and received the necessary permits. In this case, the total amount of the transaction to repurchase the asset is not called. It is planned that the volume of oil refining at the new refinery will be 900 thousand tons per year. In the near future, the new owner expects to determine the amount of investment in the technical re-equipment and modernization of the plant. The supply of raw materials and product sales will be undertaken by Solid, which plans to invest billion rubles in the 1,5 project for the purchase of raw materials and payment for transportation. For “Solid”, the Angarsk plant is the first processing project.

At the same time, the launch of the refinery coincides with the moment of forced freezing of fuel prices, when the government and large oil companies accuse traders who do not produce fuel, but resell small-scale wholesale lots from the exchange, to increase prices for fuel and lubricants. Accordingly, the “Solid” project can be implemented in response to the government’s plans to temporarily ban the sale of fuel by traders on the exchange, given that there are conditions in Priangarie for such a project: raw materials are available and there are opportunities for exporting petroleum products. However, at the first stage, the new mini-refinery will not produce high-standard Euro-5 environmental fuel, but AI-80 gasoline and diesel, which are in demand in the agro-industry and logging, as well as fuel oil. To produce "Euro-5" is planned in the future.

Work is also continuing on the construction of the energy infrastructure for the Power of Siberia gas pipeline in Yakutia. As part of the technological connection of gas pipeline facilities, DVEUK JSC reconstructs the ONKMX 220 kV substation, due to which its total capacity will be increased from 50 to 80 MW. In addition, work was organized on the construction and reconstruction of power grid facilities to connect the Saldykelskaya and Olekminskaya compressor stations at the Yakutsk Gas Production Center. The total cost of the projects is 2,6 billion rubles. According to the agreement on technological connection of the Power of Siberia facilities to the power grids of the Western Energy District of Yakutia, the works should be completed in the 2020 year.

Why is it more profitable to import fuel to the republic, EastRussia found out