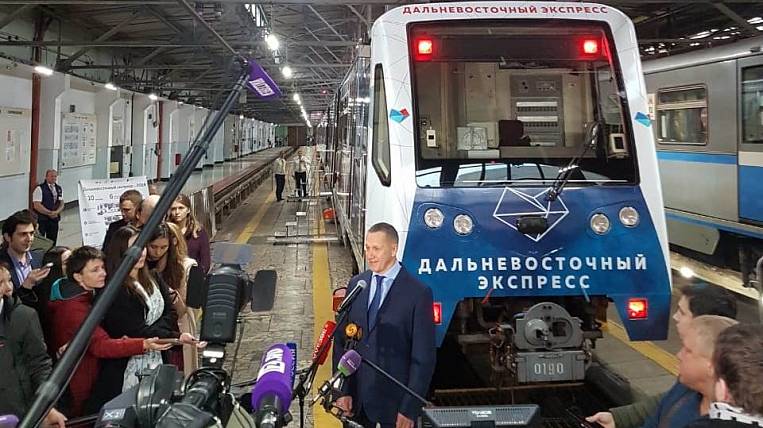 A new thematic train, the Far Eastern Express, was launched on the Koltsevaya line of the Moscow metro from the Krasnaya Presnya depot, which announces the Days of the Far East in Moscow and tells passengers about the sights, history and nature of this territory.

The express train consists of five cars divided into two sections. Nine of them are devoted to the regions of the Far East, a separate car tells about education and work in the DFO.

“We want to tell everyone who sees this train that the Far East is one of the wonderful parts of our country, that it is necessary to come to the Far East, that for people who want to work, they’re starting their time to get acquainted with the possibilities of the Far East. We will continue this tradition, we hope that people will come to the Far East to find work, and there are many jobs today, ”said Deputy Prime Minister and Plenipotentiary President of the Russian Federation to the Far Eastern Federal District Yury Trutnev.

Cruise on the Ring "Far East Express" will be six months. It is expected that during this time more than two million passengers will learn more about the Far East. This train became the 21 thematic train, which entered the line of the Moscow metro this year.

“The launch of trains dedicated to the Far East has become a good tradition. Many thanks to all who participated in the branding of this composition. Today he will take a flight on the ring line, which transports 600 thousand people per day. Every day 20 thousand people will be able to get acquainted with the Far East, ”said the head of the Moscow metro Viktor Kozlovsky.

This year, the Days of the Far East will be held in two stages: from 3 to 9 December, a fair will be held on Tverskaya Square, where handicrafts, honey, tea, nuts, venison, caviar, Far Eastern fish and seafood will be purchased; From 13 to 15 December at Krasnopresnenskaya Embankment, 14 Muscovites and guests of the capital will be able to get a closer look at the peculiarities of the eastern regions of Russia, their traditions, culture, tourist opportunities and economic potential. The key event will be a festival for young people.