Notice: curl_setopt(): CURLOPT_SSL_VERIFYHOST no longer accepts the value 1, value 2 will be used instead in /home/admin/web/eastrussia.ru/public_html/gtranslate/gtranslate.php on line 101
 Deputies support staffing decisions of Khabarovsk Territory Governor - EastRussia | Far East
News January 24 2020
17:27 In Russia, they want to reduce the tax for receiving accumulated pension
16:04 Russian cadets will take part in the celebration of the Republic of India Day
15:08 The enterprises of the military-industrial complex will write off debts


Khabarovsk Krai 06:19 Global cultivation of ginseng will be in the Khabarovsk Territory
06:00 Experts have calculated savings on a mortgage with Putin's support measures
More news
Media News2
HOME News 09.08.2019 13:53 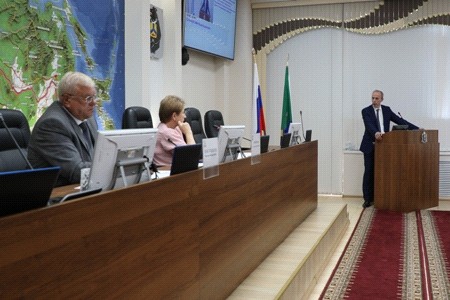 For the first time, a new law was applied in the Khabarovsk Territory to limit the powers of the governor. At an extraordinary meeting of the regional Duma, deputies considered candidates for the post of first deputy chairmen of the regional government, which was introduced by Sergei Furgal. Most parliamentarians agreed with the choice of the head of the region.

Deputies voted for Vladimir Khlapov unanimously, Yuri Zolochevsky was approved by a majority of votes. However, this agreement is not yet final. In mid-August, the decision will be made at a general meeting of parliamentarians.