Notice: curl_setopt(): CURLOPT_SSL_VERIFYHOST no longer accepts the value 1, value 2 will be used instead in /home/admin/web/eastrussia.ru/public_html/gtranslate/gtranslate.php on line 101
 Two years free port of Vladivostok was celebrated with a round table in Moscow - EastRussia | Far East
News 02 April 2020
15:06 Russia will spend 500 million on the export of its citizens from abroad
14:41 Announcement: Roscongress and EY will give business survival instructions
Chukotka 14:18 The regime of universal self-isolation was introduced in Chukotka

Two years Vladivostok was awarded with a round table in Moscow 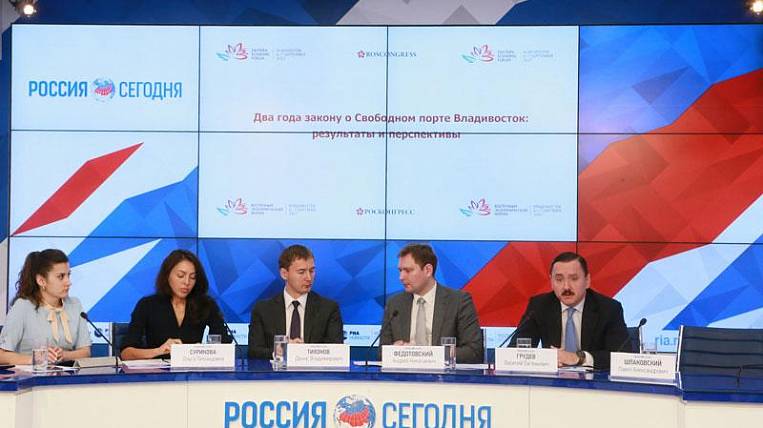 On Wednesday, the press center of the MIA "Russia Today" held an expert roundtable on "Two years of the law" On the Free Port of Vladivostok ": results and prospects." In Moscow, officials of the Minsk region attended the event and quite a lot of Russian and foreign journalists. Representatives of business - residents of the Free Port of Vladivostok came to the direct line from the capital of Primorye. It so happened that the lion's share of the time the speakers devoted to the reporting information: talked about what was done (and done not so little for quite a short time). As a result, only 15 minutes remained for questions and free discussion, which reduced them to a minimum.

The main speaker from the Russian Ministry of Territorial Development at the event was Andrey Fedotovsky, Director of the Department of Advanced Development Territories (TOR) and the Free Port of Vladivostok. According to Mr. Fedotovsky, "to date, we have received 396 applications for the status of a resident of the Free Port of Vladivostok for a total amount of 374 billion rubles. Of these, 309 applications have been confirmed, 28 projects are now under consideration. "

From the speech of the representative of the Ministry of Regional Development it became obvious that the Free Port regime had the greatest dynamics in the Primorsky Territory: only two municipalities - the city of Vladivostok and the Artemovsky urban district - give almost 230 applications from investors. Against this background, the new territories of the Free Port - in Kamchatka, Sakhalin, Chukotka and Khabarovsk Territory - are just gaining weight. In them, the tendency to do business (though small, though large) under the auspices of the Free Port has not yet become mass.

At the same time, the number of projects announced so far is radically different from the number of projects implemented. "From the results of the work of residents for two years: 10 projects were fully implemented, the amount of investments in them amounted to more than 10 billion rubles, more than 1,5 thousands of jobs were created," said Denis Tikhonov, general director of the management company - KRDV.

The representative of one of the projects implemented - Director of Aviapolis Yankovsky LLC Konstantin Bogdanenko - shared his experience: “We conducted a serious financial assessment of the prospects for participation in the Free Port of Vladivostok. It turned out that for the 10 years of operation of the plant, the conditions of the PWV will save almost 200 million rubles. This is a decent amount comparable to the cost of building production. It best shows the benefits that SPV can provide to companies. ”

Particular attention during the round table was paid to the Eastern Economic Forum. Speakers noted the important role of the WEF in the promotion of the territory and the projects implemented on it among international and Russian investors, as well as in the formation of the legislative framework for the activities of the Free Port of Vladivostok. In 2017, the Forum business program will have separate sessions on the territories of priority development and the Freeport of Vladivostok.

Also during the expert roundtable discussion were issues of introduction of a simplified visa order for entry to Russia through checkpoints on the territory of the Free Port of Vladivostok and a single tax for residents of the SPV.

In general, the overall tone of the event was markedly positive. There were no companies that would have contentious and problematic issues. The scientific and expert community was not represented. In general, all reported on the successes. Officials about their own, business about their own.

By the way, the event was one of the first for the recently earned Association of Residents of the Free Port of Vladivostok. I would like to believe that under the direction of businessman Konstantin Bogdanenko, a businessman well-known in Primorye, this structure will accumulate questions and observations and then, in the course of work, share them with the public and the press.

“Single window” was opened for residents of the TOP “Chukotka”

Interview RDC: how to be more convenient and useful for business