Notice: curl_setopt(): CURLOPT_SSL_VERIFYHOST no longer accepts the value 1, value 2 will be used instead in /home/admin/web/eastrussia.ru/public_html/gtranslate/gtranslate.php on line 101
 Jewish Autonomous Region Celebrates 80 Anniversary - EastRussia | Far East
News 03 April 2020
05:00 Putin instructed to introduce a special order of movement in the regions
04:51 Demand for cash and currency decreased in Sberbank
The Republic of Buryatia 04:37 The number of patients with coronavirus in Buryatia increased to 31


04:28 Kamchatka and Khabarovsk Territory refuted data on the lack of test systems
04:13 The expert announced the upcoming mass reductions due to downtime of the shopping center
Primorsky Krai 04:00 Two more cases of coronavirus confirmed in Primorye
Sakhalin Region 03:56 Quarantine on Sakhalin extended for passengers from Moscow
Amur Region 03:41 Coronavirus test began to offer scammers in the Amur region


Primorsky Krai 03:32 Launch Launch Platform relocated from USA to Primorye
03:12 All regions of the Far East have introduced a regime of self-isolation
03:00 Coronavirus in the Far East: information on the morning of April 3
Sakhalin Region 02:34 Sakhalin resident punished for fake about coronavirus
02:16 Otkritie Bank Announces Net Profit for 2020


Kamchatka 02:13 Kamchatka Governor resigns
02 April 2020
Trans-Baikal Territory 19:50 Alexander Osipov introduced prohibition in Transbaikalia
19:16 Putin extended the day off until April 30
15:06 Russia will spend 500 million on the export of its citizens from abroad
14:41 Announcement: Roscongress and EY will give business survival instructions 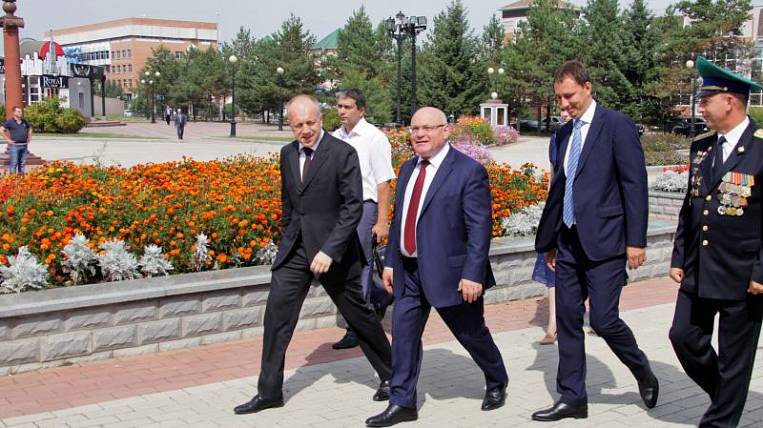 2 September Jewish Autonomous Region celebrated 80-year anniversary. The solemn meeting devoted to this event was held in the Birobidzhan regional philharmonic society, the press service of the regional government reported. Andrei Motovilov, Deputy Plenipotentiary of the President of the Russian Federation in the Far Eastern Federal District, Yu Shaiyan, Deputy Chairman of the People's Government of Heilongjiang Province, Su Fuqiu, Consul General of the People's Republic of China in Khabarovsk, Berl Lazar, Chief Rabbi of Russia, the delegation of the Republic of Sakha (Yakutia) bodies of state power of the region, honorary guests.

The government telegram to the governor and residents of the Jewish Autonomous Region from Russian President Vladimir Putin was read by Deputy Plenipotentiary Envoy of the President Andrei Motovilov. The head of state noted the important role of the Jewish autonomy in the self-determination of the nation, the development of Jewish culture and relations with the Jewish community not only in Russia. The text of the telegram says that the last decades have become a new milestone in the development of the region and serious investment projects implemented on its territory that will help solve the most important socio-economic tasks set by the country's leadership in front of the Far East regions will contribute to its further development.

A report at the solemn meeting was made by the Governor of the Jewish Autonomous Region Alexander Vinnikov. He noted that today the EAO is the only autonomous region in Russia. Historically, it was the first state formation of Jews. "It can be said that our region was created literally by the whole world, this is one of its unique features," the governor emphasized, "primarily by ideological volunteers, as well as people who traveled to these regions in search of a better share, what they did, otherwise it would not be called a labor feat and just a feat. " Alexander Vinnikov noted that every anniversary of the region opens new and brings back undeservedly forgotten names of fellow countrymen, which residents of the region have the right to be proud of.

Alexander Vinnikov also said that today many enterprises with a long history are confident in the current economic conditions. For example, most recently marked its 65-year anniversary of the flagship of the regional industry - Teploozersky Cement Plant, which is constantly increasing output. The Birobidzhan plant of power transformers continues to develop, the second step was taken by the Kuldur brucite mine in recent years. The largest employer and taxpayer of the region will soon be the Kimkano-Sutarsky ore mining and processing enterprise. In many ways, this project is connected with another infrastructure project, no less significant for the region, on the construction of a cross-border bridge across the Amur, which will open a new page not only in the development of international relations, but also in the further development of the Far Eastern subjects of the federation.