Notice: curl_setopt(): CURLOPT_SSL_VERIFYHOST no longer accepts the value 1, value 2 will be used instead in /home/admin/web/eastrussia.ru/public_html/gtranslate/gtranslate.php on line 101
 Gostekhnadzor in Buryatia will be checked after an incident on a trampoline - EastRussia | Far East
News January 24 2020
17:27 In Russia, they want to reduce the tax for receiving accumulated pension
16:04 Russian cadets will take part in the celebration of the Republic of India Day
15:08 The enterprises of the military-industrial complex will write off debts


Khabarovsk Krai 06:19 Global cultivation of ginseng will be in the Khabarovsk Territory
06:00 Experts have calculated savings on a mortgage with Putin's support measures
More news
Media News2
HOME News 03.06.2019 06:02 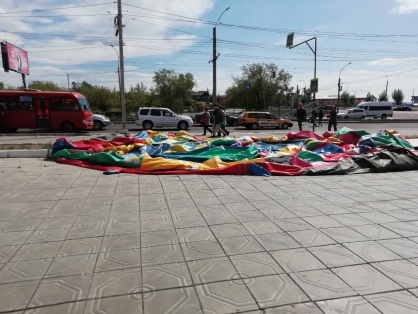 Investigators in Buryatia will inspect officials of Gostekhnadzor, who issued a permit to operate a trampoline in Ulan-Ude. Soon after their approval, several children were injured on the ride.

After the incident, investigators opened a criminal case on the provision of services designed for children and not meeting safety requirements. The owner of the attraction was sent under house arrest.

According to the press service of the IC SK of Russia in Buryatia, the trampoline was installed on 6 on May 2019 of the year, on the same day, it was checked by employees of the State Technical Inspectorate of Buryatia. They issued a conclusion on the serviceability of the attraction, but soon, due to a strong gust of wind, the inflatable trampoline, in which there were children, turned over, the victims ended up in the hospital. Investigators found out that the attraction was not properly fixed to the balancing mounts.

Families of children who suffered from tipping a trampoline in Ulan-Ude will receive 400 thousand rubles. The authorities of the republic will allocate this money from the reserve fund of the government of Buryatia.