Notice: curl_setopt(): CURLOPT_SSL_VERIFYHOST no longer accepts the value 1, value 2 will be used instead in /home/admin/web/eastrussia.ru/public_html/gtranslate/gtranslate.php on line 101
 Civil Air Fleet of China to replenish Airbus with a new model - EastRussia | Far East
News February 27 2020
05:02 United Russia denied plans to change leader and name
Primorsky Krai 04:47 Infrastructure in Primorye will be exchanged for affordable housing prices
04:19 Accounts Chamber: ASEZs in the Far East contribute to the outflow of money


Jewish Autonomous Region 04:00 Three PRC citizens released from coronavirus quarantine in EAO
03:41 Russia will extend introduction due to coronavirus restriction
Primorsky Krai 03:21 The Prosecutor General's Office reduced the amount of the lawsuit against the ex-mayor of Vladivostok
03:03 Russia will limit air traffic with South Korea
The Republic of Sakha (Yakutia) 02:58 New business ombudsman appointed in Yakutia 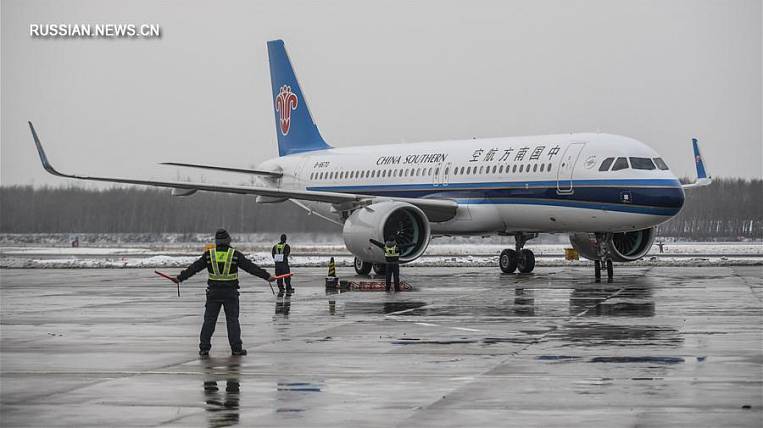 The new aircraft, purchased by the northern division of the company "Chinese Southern Airlines", arrived at Shenyang Airport in northeast China.
From the next day, he will start operating regular flights from Shenyang to the city of Guangzhou.

Recall earlier reported that the aircraft construction concern Airbus in 2016 delivered Chinese customers 153 aircraft, including 141 Airbus A320 and 12 boards A330. Thus, last year was the seventh consecutive year, when the shipments of the company's liners to China exceeded 100 units.
Tags: aircraft China aviation
Related News: