Notice: curl_setopt(): CURLOPT_SSL_VERIFYHOST no longer accepts the value 1, value 2 will be used instead in /home/admin/web/eastrussia.ru/public_html/gtranslate/gtranslate.php on line 101
 MS-21 aircraft to be assembled in Irkutsk with UAE - EastRussia | Far East
News January 23 2020
Primorsky Krai 05:00 Kindergartens again "mined" in Vladivostok
Kamchatka 04:52 Prosecutor's Office: doctors in Vilyuchinsk were not paid extra for overtime
Khabarovsk Krai 04:34 Kindergartens again "mined" in Khabarovsk and Komsomolsk


Khabarovsk Krai 03:06 A passenger from China suspected coronavirus in Khabarovsk
02:45 Mishustin approved the new structure of the apparatus of the government of the Russian Federation
Irkutsk Region 02:18 Contracts for deforestation are terminated in Angara
Primorsky Krai 02:00 New diamond production launched in Primorye
January 22 2020
Irkutsk Region 23:15 Payment of regional materiel will be extended in Angara


22:37 Many parents want to send to retire earlier
21:40 Putin called for a review of the composition of the consumer basket
Kamchatka 18:36 Klyuchevsky volcano threw an ash column 5,5 km high
Irkutsk Region 18:15 Zemsky teachers will be selected in Angara
Trans-Baikal Territory 17:47 Compensation for garbage collection will begin to be paid to beneficiaries in Transbaikalia


16:17 Collectors may be allowed to collect debts from citizens for housing and communal services
Trans-Baikal Territory 15:09 Arsenic in the water caused an emergency in one of the villages of Transbaikalia
More news
Media News2
HOME News 14.10.2019 05:23

Irkutsk MS-21 aircraft to be assembled jointly with the UAE 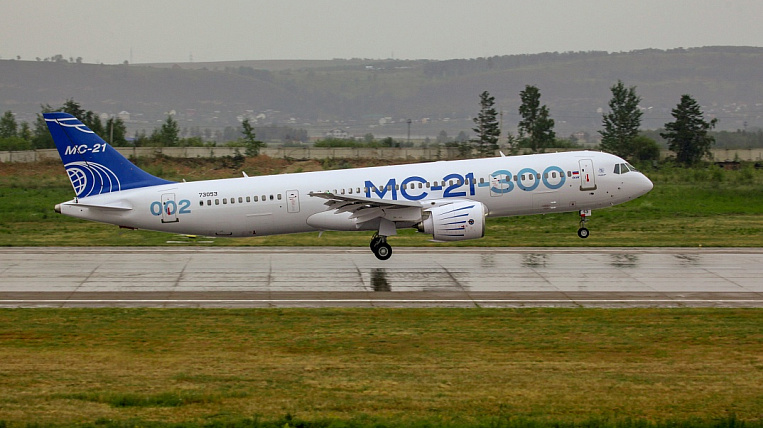 Russia and the United Arab Emirates may begin to cooperate in the production of the MS-21 airliner. Representatives of the Russian Ministry of Industry and Trade will visit a composites manufacturing company in the Middle East.

According to TASS, There is mutual interest in promoting the Emirates market of the SSJ-100 short-haul aircraft, the MC-21 medium-haul airliner and the Be-200 amphibious aircraft. In addition, countries are ready for the development of industrial and technological cooperation on the MS-21 project.

Earlier, the United Aircraft Corporation (UAC) signed at the MAKS-2019 air show agreement for the supply of 20 aircraft MS-21. Regional airline Bek Air from Kazakhstan intends to acquire ten aircraft, five more - the airline "Yakutia". It is not known with whom agreements were signed for another five aircraft.

Also Irkutsk aircraft MS-21 first shown abroad. The airliner took part in the flight program of the international fest as part of the Technofest technology festival at Istanbul Ataturk Airport.

A new threat of flooding arose in Tulun