Notice: curl_setopt(): CURLOPT_SSL_VERIFYHOST no longer accepts the value 1, value 2 will be used instead in /home/admin/web/eastrussia.ru/public_html/gtranslate/gtranslate.php on line 101
 Due to abnormal water level in Amur, only 3 routes will be opened for navigation - EastRussia | Far East
News January 27 2020
Magadan region 12:07 A lighted trawler disappeared in the Sea of ​​Okhotsk
Amur Region 11:44 Amur region strengthened its socio-economic position
Khabarovsk Krai 10:52 A plane from Khabarovsk changed course due to reports of mining


07:23 Far East has become a leader in forest smuggling
Primorsky Krai 07:00 In Primorye, approved a plan for digitalization of the region
Trans-Baikal Territory 06:37 High alert mode introduced in Transbaikalia due to coronavirus
06:19 Small business amnesty was asked from Mishustin
Irkutsk Region 06:00 RosRAO will help eliminate waste from Usolyekhimprom in Angara


Kamchatka 05:41 Subsidies will be allowed to spend on the Far Eastern mortgage in Kamchatka
Amur Region 05:18 They tried to import sausage with swine fever into the Amur region
05:00 The population of Russia continues to decline
The Republic of Buryatia 04:39 Due to coronavirus in Buryatia, sanitary-quarantine control has been strengthened
The Republic of Sakha (Yakutia) 04:28 To create an airline for the Far Eastern Federal District, they propose to consider Yakutia

Due to the abnormal water level in Amur, only 3 routes will be opened for navigation. 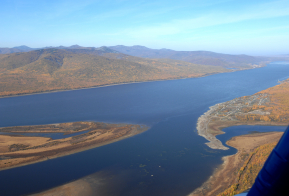 On the first day of navigation, only three routes will be open on Amur. About it пишет official portal of the government of the Khabarovsk Territory.

According to the results of the April technical flight 27, the following routes will be opened:

- "River Station - Sadovaya - 2" to the following stopping points: "Telegino", "River", "Construction", "Sadovaya-2". The stopping point "Dubki" is closed due to the appearance of a sandbar.

The remaining flights will remain closed due to abnormally low water levels.

Ранее сообщалосьthat the water level in the Amur River near Khabarovsk dropped to 167 centimeters. This is the lowest figure in the last 15 years.

Navigation ended in the Magadan region