Notice: curl_setopt(): CURLOPT_SSL_VERIFYHOST no longer accepts the value 1, value 2 will be used instead in /home/admin/web/eastrussia.ru/public_html/gtranslate/gtranslate.php on line 101
 Kim Jong-un laid flowers at the Eternal Flame in Vladivostok - EastRussia | Far East
News 01 April 2020
05:34 Regions allowed to introduce emergency mode due to coronavirus
The Republic of Sakha (Yakutia) 05:26 The coronavirus at the doctor in Yakutia was not confirmed
05:14 Scientists have calculated the humidity level for the deactivation of coronavirus


05:00 Since April 1, pensions will be indexed in Russia
04:44 The State Duma approved the law on visas for residents of the TOP and SPV
04:31 Large retailers will refuse cash due to coronavirus
Khabarovsk Krai 04:16 Khabarovsk entrepreneurs freed from checks due to coronavirus
The Republic of Sakha (Yakutia) 04:00 Laboratories in Yakutia are re-profiling for the diagnosis of coronavirus


Kamchatka 03:43 Navy forbids Novatek to build a terminal in Kamchatka
03:31 Super trawler for the Far East launched in St. Petersburg
Amur Region 03:16 Medical masks for the Amur region will be sewn by ordinary residents
03:00 Coronavirus in the Far East: information on the morning of April 1
Irkutsk Region 02:44 Self-isolation regime introduced in the Irkutsk region


13:49 The law on liability for quarantine violation was adopted by the State Duma of the Russian Federation
The Republic of Sakha (Yakutia) 13:02 The first patient recovered from coronavirus in Yakutia
More news
Media News2
HOME News 26.04.2019 06:24

Kim Jong-un laid flowers at the Eternal Flame in Vladivostok 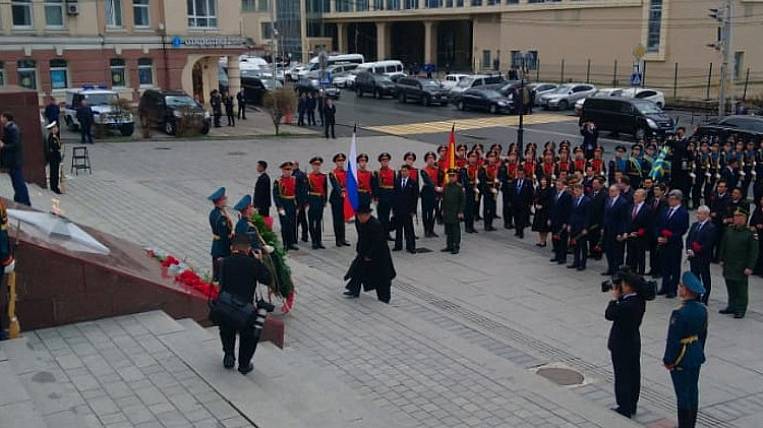 DPRK leader Kim Jong-un, together with the Russian delegation, laid flowers at the Eternal Flame at the “Military Glory of the Pacific Fleet” memorial in Vladivostok. A moment of silence they honored the memory of the heroes, among whom were Korean citizens.

According to the press service of the regional administration, Governor of Primorye Oleg Kozhemyako, head of the Ministry of Eastern and Eastern Development Alexander Kozlov, Deputy Minister of Foreign Affairs of Russia Igor Morgulov and Extraordinary and Plenipotentiary Ambassador of Russia to North Korea Alexander Matsegora also laid flowers at the memorial.

The North Korean leader decided not to stay long in Russia for a long time and decided to abandon certain points of the cultural program, including visiting the aquarium and watching ballet on the Maritime Theater Primorsky Stage.

The solemn farewell of the North Korean leader will be held about 15: 00. Near the railway station again restrict parking, there strengthened police outfits and closed the aeroexpress station.