Notice: curl_setopt(): CURLOPT_SSL_VERIFYHOST no longer accepts the value 1, value 2 will be used instead in /home/admin/web/eastrussia.ru/public_html/gtranslate/gtranslate.php on line 101
 The Ministry of Transport of the Russian Federation at VEF-2016 presented at its stand the project of the East Port Coal Complex - EastRussia | Far East
News January 20 2020
Sakhalin Region 15:54 Minimum wage agreements will begin to conclude on Sakhalin
Khabarovsk Krai 15:45 Power engineers cannot restore electricity supply in BAM villages
Primorsky Krai 15:29 Graduates of orphanages received apartments in Primorye 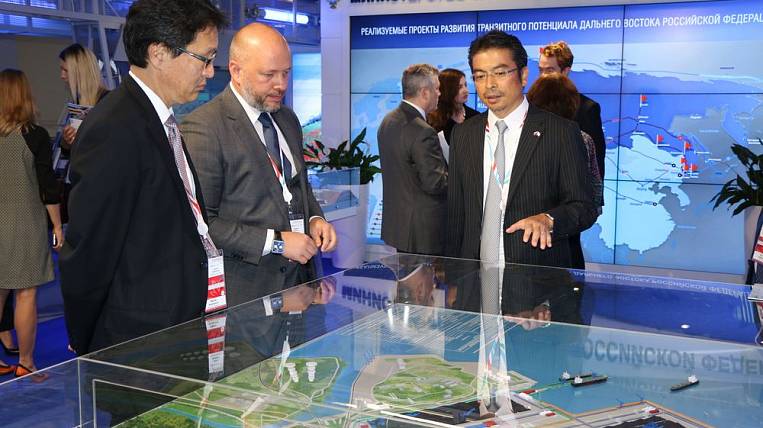 Special project Coal of the East of Russia
According to Anatoly Lazarev, Managing Director of Vostochny Port JSC, during the presentation of the construction phases of the Third Coal Complex during the investment projects in the field of transport and logistics, the warehouses of the Coal Complex Vostochny Port are designed for one-time storage of 800 thousand tons of coal products.

Anatoly Lazarev noted that the geography of the ports of the Far East is often due to the limited warehouse space due to the dense development and the lack of expansion. The total area of ​​the complex is 54 Ha, 17 of which is the former territory of the sea, on which an artificial land plot was created.

Since December 2012, the project has already been implemented by 75%. Completion is expected in 2017.

At the booth of the Ministry of Transport of Russia for the participants and guests of VEF-2016, the layout of the Third Phase of the Coal Complex of Vostochny Port JSC and the film about the existing and under construction terminals were presented, the press service of the company reports.

The head of the Ministry of Transport of Russia, Maxim Sokolov, in an interview with the managing director of JSC "Eastern Port" Anatol Lazarev noted positive and prospective for other companies the experience of JSC "Vostochny Port" on replenishment of marine bioresources during the implementation of the investment project. For 2015 year the stevedoring company has financed the replenishment of kelp, scallop, trepanga and chum salmon for the total amount of 70 million rubles.

Maxim Sokolov expressed his intention to visit the Eastern Port, for personal acquaintance with the facilities of the terminal under construction.
Tags: WEF-2016 Ministry of Transport Maxim Sokolov East Port Anatoly Lazarev The project of the coal complex of the "Eastern Port"
Related News:

Analytics All for the port-franco

Regions of the Far East are preparing to become Free Ports