Notice: curl_setopt(): CURLOPT_SSL_VERIFYHOST no longer accepts the value 1, value 2 will be used instead in /home/admin/web/eastrussia.ru/public_html/gtranslate/gtranslate.php on line 101
 Oleg Kozhemyako, by decision of the president, became a provisional governor of the Primorsky Territory - EastRussia | Far East
News January 23 2020
Khabarovsk Krai 21:23 New waste sorting stations will be built in the Khabarovsk Territory
Irkutsk Region 19:57 In Tulun removed the threat of flooding of residential buildings
19:35 Cigarettes will go up in price in Russia

Oleg Kozhemyako, by decision of the president, became the governor of Primorsky Krai 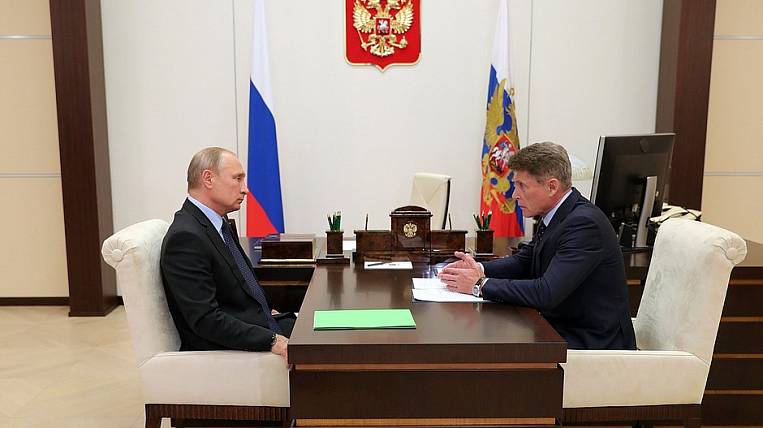 Russian President Vladimir Putin appointed Oleg Kozhemyako as acting governor of Primorsky Krai. The decision was made by the head of state during a working meeting with the head of the Sakhalin region.

During the conversation, Oleg Kozhemyako raised the issue of the election situation in Primorye. He said that this region is for him native, there he was born, grew up and began his political career - he was a deputy, a member of the Federation Council from Primorsky Krai, so he is concerned about the situation on this territory.

The head of the Sakhalin region said that he plans to participate in the election of the governor of Primorye. Vladimir Putin replied that he did not object and appointed Oleg Kozhemyako as the governor. Andrei Tarasenko, who held this position, according to the president, decided to move to another job. Now the question of choosing the leader of Sakhalin will be decided.