Amur Region 10:02 Dangerous Hong Kong flu virus detected in Amur region
09:26 The most popular foreign cars of 2019 named in Russia
Khabarovsk Krai 09:25 The prosecutor’s office began a check after an energy accident in the Khabarovsk Territory
Magadan region 08:41 Burning trawler extinguished in the Sea of ​​Okhotsk
Sakhalin Region 08:07 Sakhalin has become a leader in the fight against poverty


Amur Region 07:27 The development of the free power system will be considered by a government subcommittee
Khabarovsk Krai 07:00 The court made a new decision in the case of a fire in the camp "Holdomi"
Primorsky Krai 06:31 Ex-Mayor Pushkarev delivered to jail of Vladivostok
Khabarovsk Krai 06:11 Emergency mode introduced in the remaining villages in the Khabarovsk Territory
The Republic of Buryatia 06:00 EastRussia Bulletin: Buryatia remains the leader in the industrial production of the Far Eastern Federal District

President was shown the release of prisoners of the whale prison 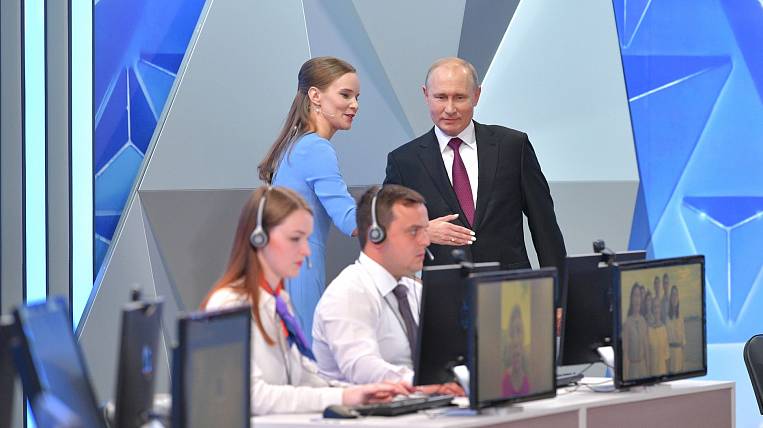 Photo by: kremlin.ru
Vladimir Putin monitored the start of the operation to produce hundreds of belugas and killer whales from the whale prison in the bay of Central Primorye. A report from the scene of the event, which was expected by environmentalists, animal rights activists and the public, was shown during the Direct Line with the President.

The first to be released today were two orcas and six belugas. Mammals will be released in the area of ​​the Shantar Islands, from where they were caught almost a year ago. According to scientists, they have high chances to reunite with families and safely adapt to their natural habitat.

Experts call the operation to produce whales difficult and unique, since no one in the world has ever done anything like this. First, the mammals are loaded into transport baths, they will overcome part of the road along the motorway. Then in the Khabarovsk Territory they will be sent on ships along the Amur to the Sea of ​​Okhotsk. In this long journey, which is about 1800 km, the whales will be accompanied by trainers whom the animals already trust. According to experts, this will help them to relive stress on the road.

In total, a large-scale operation will take about four months. Animals will be released by formed groups, since they are used to being together at their place of detention. This will allow them to adapt faster at will. All mammals have been equipped with special satellite tags to track their further fate. Experts will continue to monitor it after the release of whales into the open sea.

“It’s clear that complications arise. Only killer whales cost around 100 million dollars. There are a lot of interested parties. Therefore, the problem is so difficult to solve. Where there is a lot of money and problems are big,” Putin said and gave the floor to Deputy Prime Minister Alexei Gordeyev.

According to the vice-premier, in order to avoid such situations from now on, the regulatory framework will be changed. The government decided to ban the catch of mammals for cultural and educational purposes, leaving only scientific ones.

Analytics The dilemma of "TORA or money"

Should Transbaikal be guided to the Far East