Notice: curl_setopt(): CURLOPT_SSL_VERIFYHOST no longer accepts the value 1, value 2 will be used instead in /home/admin/web/eastrussia.ru/public_html/gtranslate/gtranslate.php on line 101
 District hospitals in a remote area of ​​Primorsky Krai connected to the regional telemedicine system. - EastRussia | Far East
News February 21 2020
Kamchatka 08:38 The brightest ethnic exhibition opened in Petropavlovsk-Kamchatsky
The Republic of Buryatia 07:34 Buryatia will receive 14 billion rubles for bridges and overpasses
Primorsky Krai 07:04 Primorye may not have enough land for the "Far Eastern mortgage"

District hospitals in a remote area of ​​Primorsky Krai connected to the regional telemedicine system. 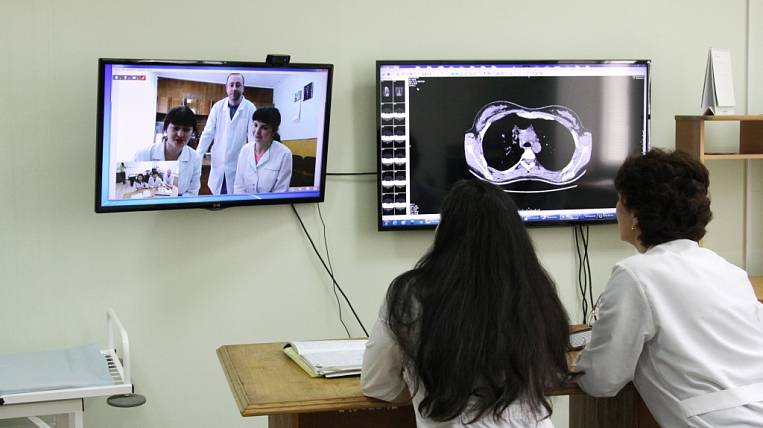 Photo: primorsky.ru
Telemedicine allowed simultaneous sessions of six central regional hospitals - Lesozavodsk, Arsenyev, Ussuriysk, Dalnegorsk, Spassk-Dalniy and a remote settlement of Plastun in the Terney district, - the press service of the Primorsky Territory Administration informs. On a reliable communication channel, rayon medical institutions went to videoconferencing with specialists from the Primorye children's regional clinical tuberculosis hospital. It is noted that consultations were held on the history of patients' diseases, the diagnosis of which causes difficulties for local doctors.

It is important that the connection made it possible not only to establish high-quality communication between specialists with each other, but also to simultaneously view tomographic data on the screens. As a result, one child will receive a referral for treatment in a hospital, another will be invited for an on-site consultation, two children will have their diagnoses corrected, and two more - outpatient treatment is shown under the supervision of a local doctor.

Note that, since June, the telemedicine network of the Primorye Children's Tuberculosis Hospital has been developing 2015. In a year and a half, doctors had already conducted 1157 telemedical consultations. In general, the system has demonstrated high efficiency. In particular, the number of consultations with phthisiologists of children and adolescents from the regions of the region increased by 31%, the number of cases of tuberculosis detected in the early stages increased by 17,5%.

As noted in interview EastRussia, Vice Governor of Primorsky Krai Pavel Serebryakov, almost 90% of Primorye medical institutions have introduced or are in the process of introducing modern information technologies. "The development of telemedicine is especially important for the districts. The shortage of doctors that we are still experiencing is particularly noticeable in the provinces. To solve diagnostic issues, since August 2015, a project for a comprehensive solution for functional diagnostics has been operating on the basis of the Khorol Central District Hospital. Equipment enabling work at a distance, it also works in Pogranichny, Mikhailovsky, Khasansky and Lazovsky districts. We will develop this direction further, ”said Pavel Serebryakov.