Notice: curl_setopt(): CURLOPT_SSL_VERIFYHOST no longer accepts the value 1, value 2 will be used instead in /home/admin/web/eastrussia.ru/public_html/gtranslate/gtranslate.php on line 101
 Emergency mode announced in Birobidzhan due to flood - EastRussia | Far East
News February 18 2020
15:00 The Russians spoke about maternal capital for the first-born
Khabarovsk Krai 13:02 Children injured in an accident involving a traffic police in Khabarovsk
Primorsky Krai 11:45 A large batch of Chinese vegetables brought to Primorye

Emergency mode announced in Birobidzhan due to flood 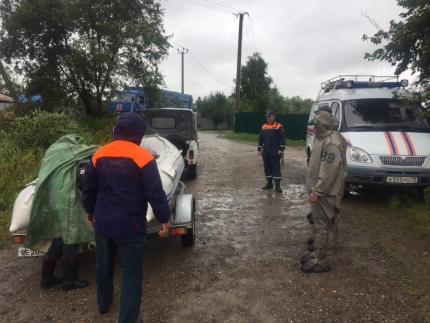 The authorities of Birobidzhan introduced an emergency mode in the city. These measures were taken due to the fact that due to past rains the rivers overflowed the banks and flooded several streets.

According to RIA Novosti, several summer cottages and courtyards were flooded. The situation in other settlements turned out to be difficult. According to the regional Main Directorate of the Ministry of Emergencies, due to rising water levels in Amur and due to groundwater discharge, hundreds of household plots were flooded in 12 settlements of the EAO, of which 150 in the Leninsky district, 364 in the Smidovichi district, two in Birobidzhan district.

Since August 2, the emergency mode has been operating throughout the JAO. It was introduced due to rains and floods on the rivers of the region, including the Amur.

High alert due to coronavirus introduced in EAO