Notice: curl_setopt(): CURLOPT_SSL_VERIFYHOST no longer accepts the value 1, value 2 will be used instead in /home/admin/web/eastrussia.ru/public_html/gtranslate/gtranslate.php on line 101
 Sheremetyevo published a chronology of the tragedy with SSJ - EastRussia | Far East
News January 18 2020
The Republic of Sakha (Yakutia) 10:33 A private concessionaire was chosen for the construction of a bridge across the Lena
January 17 2020
17:43 Banks reduce mortgage requirements
14:30 Putin's rating increased after the announcement of the message


Irkutsk Region 07:08 4 billion rubles will be required for the resettlement of floaters in the Angara region
06:46 The human factor could cause an emergency with SSJ 100 in Domodedovo
More news
Media News2
HOME News 08.05.2019 03:56

Sheremetyevo published a chronology of the tragedy with the SSJ 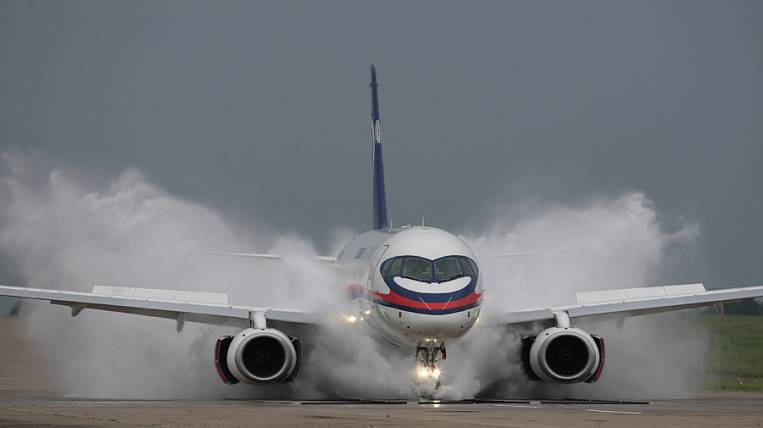 Sheremetyevo Airport published a chronology of the crash that occurred with the Sukhoi Superjet 100 aircraft, assembled in Komsomolsk-on-Amur, 5 in May of this year. Events set out from the departure of the board to the complete liquidation of the fire.

In 18: 14, the flight supervisor informed the shift chief of Sheremetyevo Airport about the return of the board. The plane landed in 18: 30, after landing there was a fire. A minute later, the flight director announced the alarm, at that time emergency ramps were released, and the evacuation of passengers by the crew began.

At 18: 32, the first fire brigade arrived at the airport’s rescue team, after a few seconds, the second billing arrived, and after a minute, four more. In 18: 35, rescuers entered the burning board, and 18: 48 the fire was completely extinguished.

To extinguish the aircraft, 26 rescuers were attracted to six aerodrome firefighters of the car, they used a gas and smoke protection vehicle to extinguish inside the aircraft, and 73 spent tons of fire extinguishing agent. Legal and professional assessment of the activities of all persons involved in this event, Sledkom and the Interstate Aviation Committee.

The disaster occurred on 5 in May, the aircraft Sukhoi Superjet 100 airline "Aeroflot" emergency landed and caught fire. Onboard were 78 people, 41 people died. A criminal case has been initiated into the fact of an emergency landing and a plane fire. Investigators suggest that cause of disaster there could be insufficient qualifications of pilots and controllers, technical malfunction or adverse weather conditions. In this case, piloting error is considered the main cause of the incident.