Notice: curl_setopt(): CURLOPT_SSL_VERIFYHOST no longer accepts the value 1, value 2 will be used instead in /home/admin/web/eastrussia.ru/public_html/gtranslate/gtranslate.php on line 101
 SSJ 100 removed from flight due to engine problems - EastRussia | Far East
News February 26 2020
Primorsky Krai 00:22 Kozhemyako called the start of garbage reform in Primorye almost a failure
Irkutsk Region 00:06 Oil and fat processing plant launched in Irkutsk
February 25 2020
Amur Region 23:42 The prosecutor's office will conduct an audit after the descent of wagons with coal in the Amur region

SSJ 100 removed from the flight due to engine problems 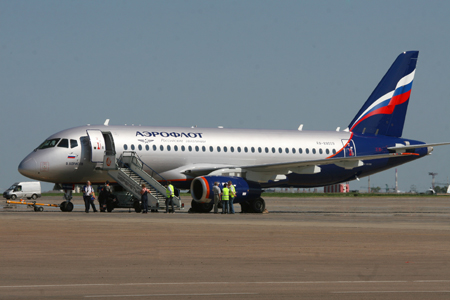 The Sukhoi Superjet 100 was removed from a flight departing from Bryansk International Airport due to a malfunction in the engine start system. About it write "Bryansk news."

The SSJ 100 departure was scheduled for 10: 45 in the morning, but due to a technical fault, the dispatch of passengers was delayed by almost five hours. A reserve flight from Krasnodar was called up to replace a defective aircraft.

7 June 2019, Yamal Airlines aircraft SSJ 100 was detained in Yekaterinburg also due to a technical malfunction, TASS reports. Passengers had to wait for five hours.

Previously, United Aircraft Corporation, manufacturer of SSJ 100, said about the deep modernization of SSJ 100 aircraft, which are assembled in Komsomolsk-on-Amur. It will include an increase in resource indicators and cost reduction. Told plans to begin shipping SSJ 100 to Thailand by the end of 2019.