Notice: curl_setopt(): CURLOPT_SSL_VERIFYHOST no longer accepts the value 1, value 2 will be used instead in /home/admin/web/eastrussia.ru/public_html/gtranslate/gtranslate.php on line 101
 FESCO sailed to Antarctica - EastRussia | Far East
News 03 April 2020
04:51 Demand for cash and currency decreased in Sberbank
The Republic of Buryatia 04:37 The number of patients with coronavirus in Buryatia increased to 31
04:28 Kamchatka and Khabarovsk Territory refuted data on the lack of test systems


03:12 All regions of the Far East have introduced a regime of self-isolation
03:00 Coronavirus in the Far East: information on the morning of April 3
Sakhalin Region 02:34 Sakhalin resident punished for fake about coronavirus
02:16 Otkritie Bank Announces Net Profit for 2020
Kamchatka 02:13 Kamchatka Governor resigns

02 April 2020
Trans-Baikal Territory 19:50 Alexander Osipov introduced prohibition in Transbaikalia
19:16 Putin extended the day off until April 30
15:06 Russia will spend 500 million on the export of its citizens from abroad
14:41 Announcement: Roscongress and EY will give business survival instructions
Chukotka 14:18 The regime of universal self-isolation was introduced in Chukotka 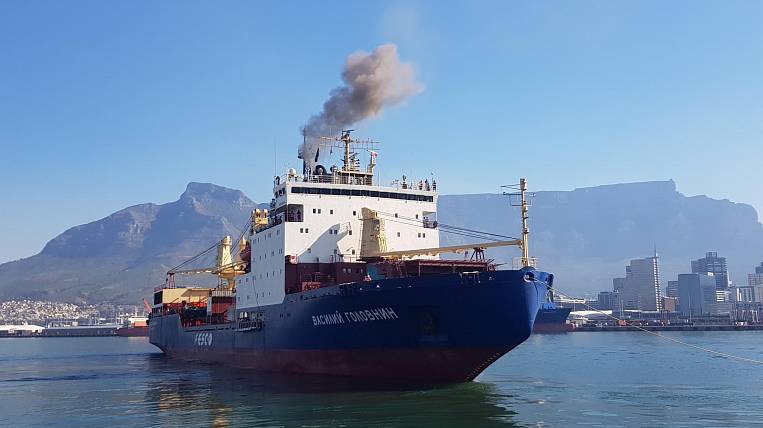 The diesel-electric ship of the FESCO transport group Vasily Golovnin left the port of Cape Town in South Africa and went to Antarctica. It delivers cargo to two Indian and Belgian research stations. The flight will last until April 2020.

In Cape Town, 1 tons of various cargoes were loaded onto the ship, including equipment, fuel and food. Vasily Golovnin will also deliver 382 Indian polar explorers to Bharati and Maitri stations, who will replace their colleagues working in Antarctica. In addition, the ship will deliver cargo to the Belgian station “Princess Elizabeth”.

According to the FESCO press service, there are two helicopters for carrying out ice reconnaissance and a self-propelled barge aboard the Vasily Golovnin, with which the cargo will be put on an unequipped shore. The contract for the supply of Antarctic stations FESCO and the National Center for Antarctic and Ocean Research of the Ministry of Geography of India (NCPOR) were signed in October 2018. To implement the project, the ship was repaired and additional equipment was installed.

FESCO has extensive experience in Antarctica; the company has repeatedly participated in government projects to supply research stations in Australia, Argentina, the United Kingdom, the United States, and Chile.