Notice: curl_setopt(): CURLOPT_SSL_VERIFYHOST no longer accepts the value 1, value 2 will be used instead in /home/admin/web/eastrussia.ru/public_html/gtranslate/gtranslate.php on line 101
 The composition of the new government approved in Russia - EastRussia | Far East
News February 18 2020
The Republic of Buryatia 18:22 A new walking route along Baikal will be launched in Buryatia
Irkutsk Region 18:07 The sale of alcohol will be limited in Irkutsk
Jewish Autonomous Region 17:57 High alert announced in Birobidzhan


Kamchatka 06:00 12 candidates were selected for the contest for the election of the head of Petropavlovsk
Irkutsk Region 05:37 The prosecutor's office began the search for a source of air pollution in Bratsk
More news
Media News2
HOME News 21.01.2020 22:23

The composition of the new government approved in Russia 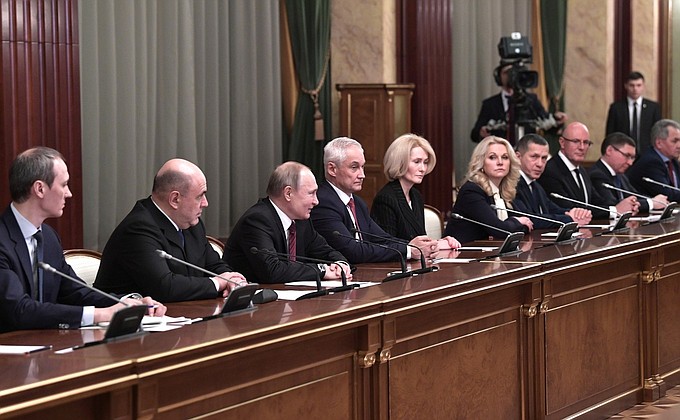 For culture, instead of Vladimir Medinsky, the head of the department of cinematography Olga Lyubimova will be responsible, and for sports instead of Pavel Kolobkov, the head of the university sports federation Oleg Matytsyn. Deputy Minister of Finance of the Russian Federation Anton Kotyakov became the head of the Ministry of Labor and Social Protection; he replaced Maxim Topilin in this post.

Instead of Konstantin Noskov, the Ministry of Communications and Mass Communications was headed by the vice president of Rostelecom, Maksut Shadaev, and the governor of the Perm Territory Maxim Reshetnikov took the place of the head of the Ministry of Economic Development Maxim Oreshkin. The former deputy chairman of the federal government, Konstantin Chuychenko, became the Minister of Justice; he replaced Alexander Konovalov.