Notice: curl_setopt(): CURLOPT_SSL_VERIFYHOST no longer accepts the value 1, value 2 will be used instead in /home/admin/web/eastrussia.ru/public_html/gtranslate/gtranslate.php on line 101
 Japan confirms its activity in partnership with Primorye - EastRussia | Far East
News 02 April 2020
Trans-Baikal Territory 19:50 Alexander Osipov introduced prohibition in Transbaikalia
19:16 Putin extended the day off until April 30
15:06 Russia will spend 500 million on the export of its citizens from abroad

Japan confirms its activity in partnership with Primorye 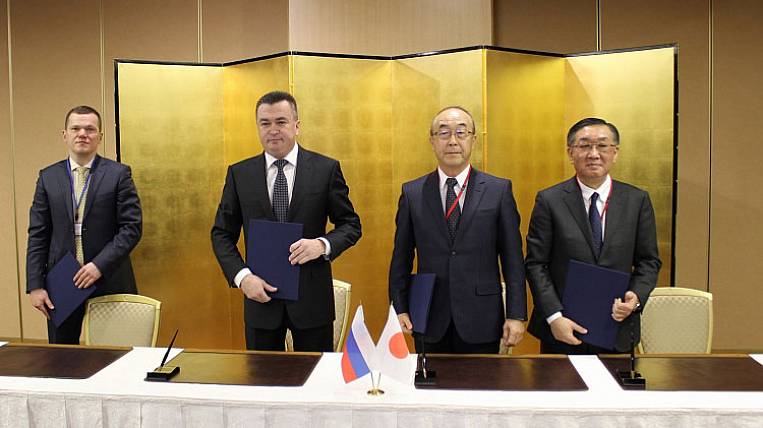 Photo: primorsky.ru
Of the 23 agreements relating to economic cooperation between Russia and Japan and signed during the visit of Russian President Vladimir Putin to Japan, 6 directly concerns Primorsky Krai. This was told by the governor of Primorye, Vladimir Miklushevsky, who joined the official delegation.

First, the Japanese corporation Iida Group Holdings (Iida Group Holdings) plans to implement a project for the construction of a woodworking plant in the Primorye Territory. This year, the Japanese corporation Iida Group has already acquired 25% of the shares of the largest company, PJSC Primorsklesprom. The total investment of the project is 20 million US dollars. The depth of wood processing will be 54% of the volume of the workpiece. The company plans to produce pellets from wood waste. The governor of Primorye stressed that timber processing is one of the most successful areas of cooperation with Japan, along with the automotive industry. Last year, timber products worth more than 52 million US dollars were exported to the Land of the Rising Sun.

Thirdly, the company Maekawa Co. Ltd., Marubeni Corporation and the Agency for attracting investments of the Far East signed an agreement to expand the production capacity of Mikhailovsky Broiler, a company specializing in the production and processing of poultry meat, for subsequent export. The Japanese are also interested in exporting environmentally friendly products of animal husbandry and agriculture, expressing their intention to supply Russian meat products to the Japanese domestic market.

Fourth, the Japanese Bank for International Cooperation JBIC intends to finance the construction of a fertilizer plant in Primorye. The relevant Memorandum of Understanding was signed by the Japanese side with Vnesheconombank and ZAO Nakhodka Mineral Fertilizers Plant.

Fifth, the Japanese side confirmed its intentions to help Vladivostok become an "intelligent" and comfortable city: within the framework of the visit of the President, an agreement was signed to develop a concept for the development of a city district between the Foundation for a Unified Development Institute in Housing and Japan's Nikken Secky Ltd.

Finally, in the sixth place, a gas chemical complex can be located in Primorye, its exact location will be determined following a joint study. For a major project are companies such as Rosneft, Marubeni Corporation and Mitsubishi Heavy Industries, in Tokyo, their leaders signed an agreement on a joint feasibility study of the construction of a gas chemical complex in the Russian Far East.

Also during the visit, an agreement was signed on the creation of a Russian-Japanese platform to attract Japanese investors in the priority development area and the Free Port of Vladivostok.