Features of the Far Eastern cuisine 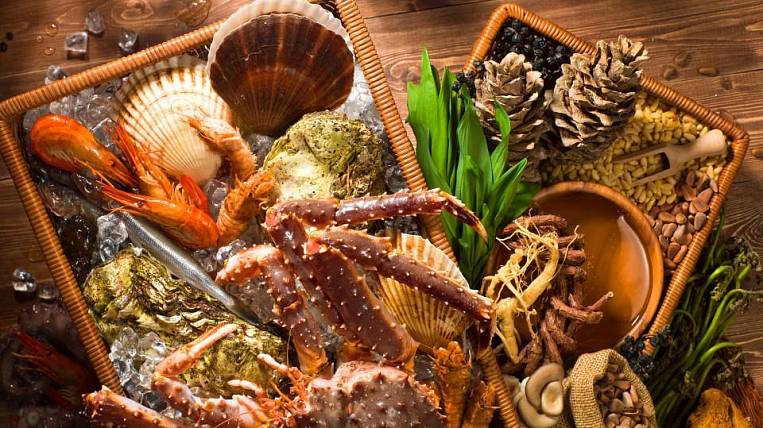 Фото: provided by the restaurant The Fifth
The gastronomic history of the Pacific Coast of Russia from the middle of the 17th century to our day can be thought of as a layer-cake. The first layer is the culinary traditions of the Far East indigenous peoples (for example, slices of frozen fish). The second layer is Russian and Ukrainian dishes, which settlers adapted to local ingredients. Dumplings with squid, seaweed borshch, and salmon ukha are good examples. The third layer includes borrowings from Chinese (wok), Korean (pyan-se and savories) and Japanese (raw seafood, sauces) cuisine.

And finally, the fourth layer is the simple home cooking of the inhabitants of the Far East of the Soviet and post-Soviet periods.

Vladivostok and Primorye satisfy aficionados of culinary tourism throughout the year. Here something is growing, ripening, "coming in" all the time, and gastronomic life is in full swing, constantly generating new ideas. Restaurateurs of the capital of Primorsky Territory regularly organize gastronomic dinners and tasting sessions and participate in all-Russian restaurant events.

In the Far East, the principle of "living on what nature gives" has been and remains a fact not only of mental, but also of economic reality. Sea and forest hunting, gathering wild plants ― these are integral parts of local residents' culture.

The Far Eastern cuisine uses many "wild" ingredients, and even cultivated ones, such as mussels, sea cucumbers, scallops, are grown in a natural environment. And cooking methods allow their healthy properties to be to maximally preserved or concentrated.

Culinary tourism in Vladivostok begins with seafood. The waters of the Sea of Japan, washing up against Primorsky Territory, create a huge opportunity to enjoy crab, mussels, sea cucumber and scallop.

The Kamchatka crab is the true gastronomic king of the Far East, inhabiting the sea coast from Kamchatka to Primorye. Crab is cooked in sea water or steamed without salt and spices, because all that the flavor requires is contained in the product itself.

The Chinese called the bays near Vladivostok Haishenwai, the bay of sea cucumber, from olden times. The not-very-appetizing appearance of the sea cucumber actually hides its miraculous qualities. It is both food and medicine. The sea cucumber is the only creature in the world which meat does not contain microbes or bacteria.

Cucumaria is a close relative of the sea cucumber, so its useful properties are hardly inferior to those of its famous cousin. Pre-boiled, then finely chopped cucumaria, roasted with carrots, onions and garlic, is called skoblyanka. This dish exists in a restaurant version, in home kitchens, and as solyanka and preserves.

In the novel Vladivostok 3000, written by Ilya Lagutenko in co-authorship with Vasily Avchenko, the scallop is represented as a sacred product of the Far Eastern, and that is not far from the truth. All of the scallop except for the stomach and the shell can be eaten. The snout of the scallop is pure protein and the mantle contains a huge amount of minerals.

In addition to the scallop, a variety of other types of shellfish are used in the Far Eastern cuisine, just as tasty and healthy: corbicula, trumpeter, mussels, surf clams.

From Vladivostok, one can go on specialized fishing tours in Primorsky Territory and throughout the Far East. For example, from May to July, trolling for masu salmon is very exciting for a recreational angler.

Various species of Pacific salmon are in evidence everywhere: at restaurants, on local residents' tables, in shops and in markets. In restaurants, they are often referred to by the general term "salmon" or "Far Eastern salmon."

In the winter fishing season, the streets of Vladivostok are filled with the smell of... fresh cucumber. For some reason smelt, the region's main winter fish, smells this way.

The second most important winter fish is navaga. Both housewives and chefs of restaurants are proud of their ability to fry smelt properly and get a beautiful golden crust on their navaga: recently, fried winter fish, previously considered to be an exclusively home-made dish, has started to be served in restaurants in Vladivostok.

The street food of Vladivostok

The steamed pie pyan-se is the Russian version of an ancient Korean dish and was invented in the early 1980s by ethnic Koreans living on Sakhalin. The dish quickly spread throughout the Far East, and residents of Vladivostok have considered the pyan-se their specialty street food since the end of the last century. Vladivostok pyan-se contains a lot of cabbage, some minced meat and spices.

Gifts of the taiga

The forests of the southern regions of the Far East are called the Ussuri taiga. Here, lianas grow next to cedars, and the number of relic and endemic plants is absolutely incredible! A variety of taiga fruits, roots, tendrils and berries are consumed in hundreds of different ways and used for to make medicines.
Bracken is gathered in May and June at the stage of milky ripeness, when it has just brairded, and preserved for the whole year: it is dried, marinated, salted. In addition to bracken, jam, syrups and tinctures of magnolia berries can be purchased in the markets of the city and the region, and magnolia-vine cane is added to tea.

Primorsky Territory is famous for the Primorsky Konditer factory. The factory's products are among the obligatory gastronomic souvenirs of Primorye, along with salmon balyks, red caviar, seafood specialties and wild plants.

CHOCOLATE WITH SEA SALT AND KELP. Kelp is rich in iodine and contains it in organic form, which makes it easily digestable. The combination of cocoa beans and seaweed, one excellent product with another, is in the best traditions of the Far Eastern cuisine.

PRIMORSKIE CANDIES. Back in 1967, the staff of a Vladivostok confectionery, headed by the master of the retail division, Anna Chulkova, developed the original recipe for Bird Milk sweets, which was deemed the best in the USSR.
The secret of the legendary Bird from Primorye, as it continues to be popularly called, despite the change of name to Primorskie, is that it is made with the help of agar-agar and fresh eggs.

PACIFIC RUSSIA FOOD is a place of freedom, experiments and discoveries, where different culinary approaches and styles can coexist peacefully.
The natural taste of ingredients is prized in the Far East. It is said here that a chef's expertise is in helping to expose and emphasize this natural taste, so most of the dishes in restaurants, as well as in home kitchens, are simple.
Tags: EEF Far East The Far Eastern cuisine
More to read: