A Businessman's Guide: How to See the Best of the City

Travels to the Kamchatka Peninsula for the vast majority of tourists begin at the Petropavlovsk-Kamchatsky airport, 29 km from the centre of the peninsula's capital. The 40–50 minutes by car, bus or minibus are tourists' first taste of the five "local" volcanoes of Petropavlovsk, or so the locals lovingly refer to the mountains vigilantly guarding their city: the active Koryaksky and Avachinsky volcanoes, and extinct Kozelsky, Arik and Aag. 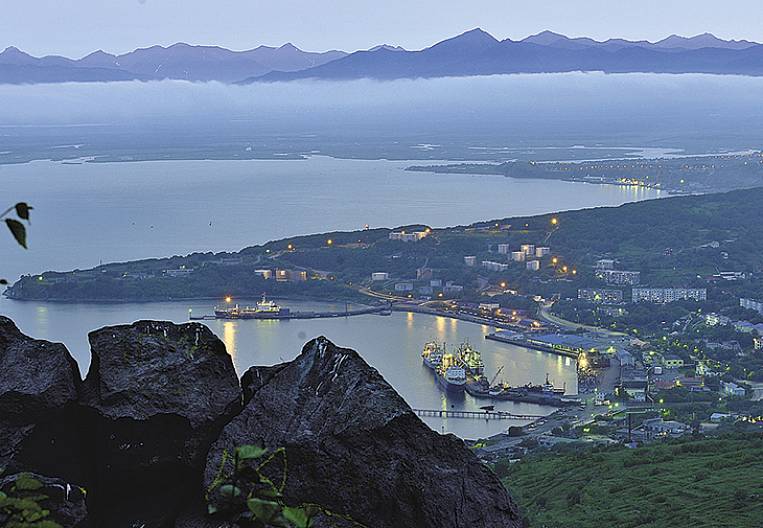 Located on the eastern shore of the Avacha Bay, Petropavlovsk stretches along the coast for 15 km. In fact, there is just one road passing through the whole city. Pobedy Avenue transitions into Tushkanov Street, then to 50 years of October Avenue, which continues into Zerkalnaya, Vladivostokskaya, Leningradskaya and Leninskaya streets. Further from the city centre the same road continues, with the names of the streets changing from Krasnaya Sopka to Okeanskaya, and then from Petropavlovskoe Highway to Industrialnaya.

As they enter the city from the airport, visitors will see a welcome sign with miniatures of the Saint Peter and Saint Paul packet boats. These were the vessels which Vitus Bering and Alexei Chirikov sailed on and entered the Niakina Bay during the Second Kamchatka Expedition in 1740. Bering named it the harbour of the St. Apostles Peter and Paul and the new settlement on its shore — Petropavlovsk Harbour. The date their packet boats made it to land — 17 October — is considered the date the city was founded.

A large part of Petropavlovsk-Kamchatsky is on the slopes of Mishennaya Hill (381 m), which the locals call Mishenka. Its southern slope drops into the Kultuchny Lake, its western slope breaks into the Avacha Bay, and the northern slope turns into a plateau entirely built up with city blocks. The top of the hill is the highest spot in the city. There are several gazebos and an observation deck there, which opens up to an excellent panoramic view of the city, Avacha Bay, and the Avachinsky and Koryaksky Volcanoes.

If you go down Mishennaya Hill towards Vladivostokskaya Street, you can see the Holy Life-Giving Trinity Cathedral. On 28 June 2002, during the Whitsunday, a steel capsule with the hallows of the Martyr Saints Anthony, John and Eustathios of Vilnius were placed in the foundations of the church as it was built along with an embedded charter. The Cathedral is gradually becoming more than just the spiritual centre of Petropavlovsk-Kamchatsky; it is also one of the capital's real attractions. After going down the Vladivostokskaya Street, you will approach Komsomolskaya Square, known as KP among the locals (this abbreviation is used, in particular, when talking about bus routes).

The Central Market is located in the area and is where you can buy white fish and salmon, caviar and other food. Fresh seafood is brought into the city regularly as fishing and fish processing is the main industry in Kamchatka. The vendors can also pack goods so you can easily carry them in your luggage.

The historical city centre is a stone's throw away from KP. After skirting the edges of the Kultuchnoye Lake, you will reach the shore of the Avacha Bay — a unique natural sight. The discovery of this spot by Russian Cossacks is easily one of the most notable geographic discoveries in the Far East. Expansive, deep, well-protected from the oceanic environment, yet at the same time open to sea transport, it seems as if nature itself created the ideal base for marine navigation. Its huge area of 215 square kilometres makes it the second largest bay in the world, and the largest in the Northern Hemisphere. Avacha Bay does not freeze in winter and therefore serves as the main sea access to Kamchatka Territory. It is home to the commercial port of Petropavlovsk-Kamchatsky and the ships of the Pacific Fleet of Russia are based here. The military and civilian vessels are tiny against the sheer size of the bay: according to some calculations, it is capable of accommodating the entire (!) world merchant fleet. Locals and tourists walk along the embankment of Avacha Bay with its street cafes, benches and the beach all year round. In summer they even swim in the waters of the bay. This is the heart of Petropavlovsk.

The central square of the city, Lenin Square, where there is a monument to the Soviet leader and the Kamchatka government building, is located directly on the shore of the Avacha Bay. Kultuchnoye Lake (a fresh water reservoir 50 m from the bay) is nearby. On its bank there is a monument to the Apostles Peter and Paul that stand at about 6 m high. The latter was opened and consecrated in 2005 as part of the celebration of the 300th anniversary of Orthodoxy in Kamchatka. The bronze monument to the apostles, the heavenly patrons of the city, is a symbol of the centuries-old presence of Orthodoxy on the eastern borders of Russia. Local couples attach multicoloured padlocks on the metal railing behind the sculpture as a sign of eternal love. The bank of the lake also has a monument to Vasily Zavoyko, the first military governor of Kamchatka.

Petrovskaya Hill looms over the lake. When standing at the top, the entire city looks like it could fit into the palm of your hand. One of several ski centres in Petropavlovsk is located on the Petrovskaya Hill — it is called Tsentralnaya. It is not intended for amateur skiing; this is a sports base with slopes suitable for slalom and giant slalom training. However, the Edelweiss mountain-skiing base on the other slope of the Petrovskaya Hill has trails of varying complexity from 400 to 1,305 m in length that are suitable for both beginners and professionals. The snow season lasts from November to May, and in summer skiers "storm" the slopes of the Kozelsky Volcano.

Lenin Square is home to the city's first and main theatre — the Kamchatka Regional Theatre of Drama and Comedy. The story of the Kamchatka theatre begins in 1933 with some truly heroic events. In January, a small group of artists travelled to Sakhalin on a boat bearing the same name. First their vessel got stuck in the ice then a fire broke out on board. The group managed to extinguish the fire, which raged for several days, on their own. But the hardships for the crew and passengers did not end with here, as the steamer then got stuck in the ice and drifted for a month and a half. It was on this ship that the people who founded the first professional theatre in Kamchatka arrived in Petropavlovsk. Today, the Kamchatka Drama and Comedy Theatre is located in a spacious building with an auditorium accommodating more than 500 guests. The outstanding acting of the artists has often been acknowledged by both their regular audience and more discerning critics during their tours and when they participate in various all-Russian and international festivals.


The city is also home to several amazingly beautiful bays within Avacha Bay: Mokhovaya, Seroglazka, Rakovaya, Zavoyko and others. From the west, two picturesque fishing rivers flow into it: the Avacha and the Paratunka. When heading from Avacha Bay into the open space of Avachinsky Gulf, there are three oddly-shaped massive rocks known as the Three Brothers poking out of the water. Legend has it, these were once three heroic brother that defended local residents from a tidal wave. After guiding the tsunami away from the shore, they turned to stone and remained there forever to protect the bay. Sea trips to the Three Brothers have long been popular with both the local residents and guests to Petropavlovsk-Kamchatsky.

Nikolskaya Hill stands over Avacha Bay. The "City of Military Glory" monument was recently installed on its slope in honour of the courage, fortitude and heroism demonstrated by soldiers in the struggle for the country's independence during the Crimean, Russian-Japanese, Great Patriotic War, and the Kuril Islands landing operation.

On the slope of Nikolskaya Hill there is also a memorial complex built in honour of the heroic defence of Petropavlovsk-Kamchatsky in 1854. There is a small necropolis that occupies a special place in the complex. An elegant chapel with a stone staircase leading up to it was built at a later time to complete the ensemble, which houses two mass graves in the centre. Russian soldiers are buried in the tomb to the right while British and French are buried to the left. A monument devoted to the heroes of the 3rd Battery of A. Maksutov was erected to commemorate the 100th anniversary of the victory over the Anglo-French aggressors. A cannon from 1833 is mounted on a tetrahedral pedestal. There is a narrow concrete path leading from the monument to the bay and legendary isthmus, where the heroic "Deadly" battery No. 3 of Lieutenant Maksutov stands on the edge of the cliff just like a century and a half ago. Five cannons guard the marine access to the city. The battery's position was restored by the ship repairmen of Petropavlovsk.

On the opposite side of the Nikolskaya Hill, the Kamchatka Exhibition and Investment Centre can be found on Leninskaya Street. The ground floor of the building is home to the Market of Kamchatka Producers. On the first floor, there are specialised exhibitions and fairs. The exhibition hall of the Territorial Museum of Art is in the same building on the first floor. The museum collection includes more than 3 thousand paintings, graphics, sculptures, decorative and applied art, folk art, artistic photography and children's art. Most of the exhibitions consist of works by artists from Kamchatka, but there are also works from abroad by artists from the USA, Japan, and North Korea, for example. The museum's collection continues to grow to this day. The museum also organises field trips: it is possible to book a bus on the museum's web-site at kamartmuseum.ru for a sightseeing tour around the area, visit the Elizov Zoo, or sign up for a walk through the city centre or to Nikolskaya Hill. The same building also houses the Tourist Information Centre, which is definitely worth checking out to learn about the available tourist routes and infrastructure. When planning your trip, you can also contact the centre's specialists with the following contact details.