Russia’s Far East has great potential for development, although to turn this potential into tangible benefits is a goal that only a strong and trustworthy system of attraction for investors can solve. Such a system is being created in Russia’s Far East 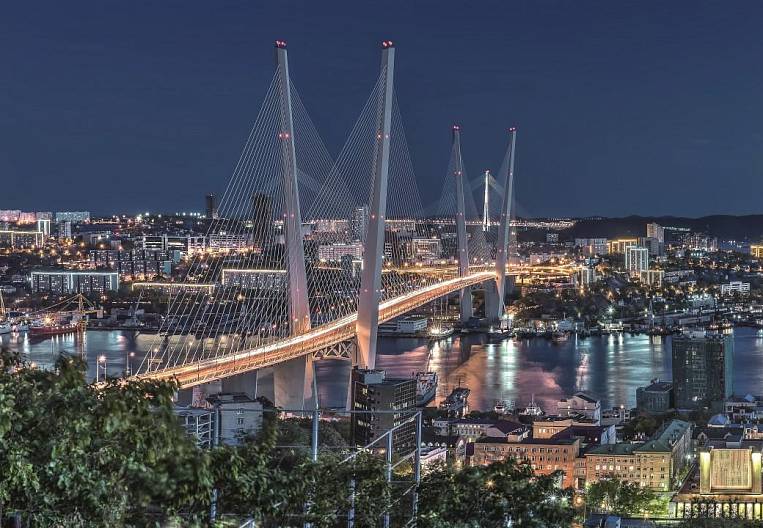 Advanced Special Economic Zones are being created for the facilitation of large industrial projects as well as for the development of small and medium business on specific compact sites. The government promises to improve infrastructure in these zones, which is needed for the coming companies. Upon receiving the status as a member of the ASEZ, those who initiate the investment projects get access to a wide range of advantages – from tax incentives to administrative benefits.

To develop this idea, the government has implemented another preferential scheme – the free port of Vladivostok. Despite the fact that only the capital of the Primorsky region is mentioned in the name of the project, the free port scheme is implemented in several other regions of the Far Eastern Federal area, and continues to grow. Under this policy, the government offers incentives in exchange for investment – without the construction of infrastructure.

Both schemes are quite similar, although they have small differences in terms of the incentives provided. The main difference is that FPV is a preferential scheme which works within the parameters of a municipal unit, whereas ASEZ is a zone with specially created borders. As a rule, ASEZ includes either active industrial objects (such as ‘brownfield’) or prospective sites for its placement (‘greenfield’).

The third mechanism is the subsidizing of investors’ expenses for the creation of infrastructure. The government takes on obligations to create the network of roads to the new sites without providing any tax benefits. Usually, large mining or port companies are keen on following this path.

Control of the development: investors first!

“At the moment, 35 new enterprises have been completed,” said Yuri Trutnev, the President’s advisor on Russia’s Far East, to Vladimir Putin this summer. “There will be 85 such enterprises by the end of this year. The volume of private investments in the Fast East’s economy will exceed RUB 115 bn, and 5,500 jobs will be created. Our current growth rate is by a factor of 10, which means for each rouble spent from the budget, we attract 10 roubles of private investment. The enterprises are from different trades; industry, agriculture, logistics, transport. According to those deals, the volume of investments has exceeded RUB 3 tn. It’s only agreements so far, but RUB 745 bn is already being used for construction. 25% of this investment is foreign. Our respected neighbours from China, Japan and the Republic of Korea also invest money here,” he added.

The minister of the Development of Russia’s Far East, Alexander Galushka, says that there are competitive conditions for investment in Russia’s Far East. “Due to the new measures to encourage investors, there are new plants being made, new institutions, new infrastructure,” he said.

To develop the ASEZ and FPV projects, a state owned managing company was established – the ‘Far East Development Corporation’. “The promotion of commercial activity is the main goal of our company. We aim to create favourable financial and administrative conditions for business and infrastructure development for the FPV projects, and the accompanying investment projects, according to the principle of a ‘one-stop-shop’,” said the General Manager of the Far East Development Corporation, Denis Tikhonov.

The corporation manages the FPV throughout the federal subjects of Russia that are part of the Far Eastern Federal District, and with the adoption of the Federal Law "On the Free Port of Vladivostok", the Freeport project entered its sphere of responsibility. The fundamental principle of the corporation is the ‘one-stop-shop’ concept for investors.

The corporation provides administrative support for investment projects in the field, accepts applications for obtaining membership of the ASEZ and FPV, helps in the development of a business plan, advises on tax and accounting matters, and represents the interests of a member in court. Under the ASEZ scheme the necessary infrastructure and support for customs operations are also provided. Within the framework of the FPV, the corporation assists in obtaining land without bidding.

Denis Tikhonov says that it is important for government bodies and the corporation itself that every declared investment project receives a chance of implementation as they bring new enterprises, new jobs, development of the region and increases the well-being of residents. 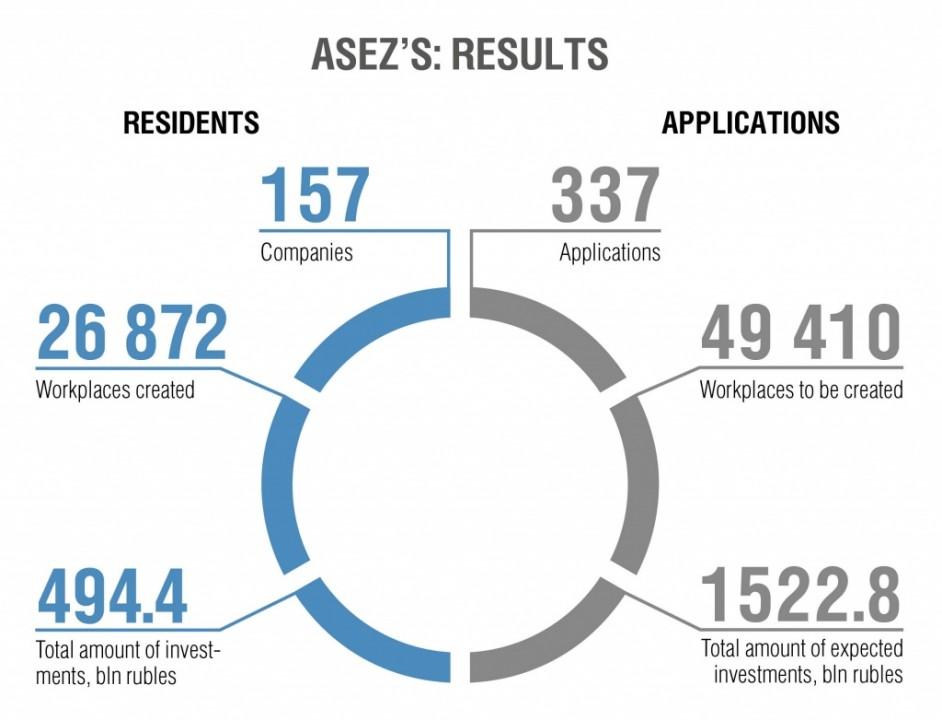 Investors who confirm their status as members of the ASEZ and FPV receive unprecedented tax, customs, administrative and other type of advantages within Russia. All this is clearly recorded in the laws of the new preferential schemes, with numerous amendments to existing laws associated with them as well as by-laws.

The reduction in the tax burden primarily occurs within the basic Russian taxes – profit, land and property taxes. The tax paid from the salary fund of company employees is being significantly reduced. The difference is compensated by the state. Non-tax incentives are also important as they simplify and speed up the numerous administrative procedures accompanying the opening of any business in Russia.

To become a member is easy

In order to become a member of the ESAZ or FPV, one needs to apply through the Far East Development Corporation. The application form and a sample of a business plan can be found on their website in the ‘About the Corporation’ section, or it can be received by e-mail from a personal manager.

The application and the package of documents can be sent to Moscow by post (123317, Moscow, 8 Presnenskaya Embankment, Building 1, Floor 7, “Gorod Stolits”, Northern Block) and Vladivostok (690922 Vladivostok, 17 Okeansky Prospect, Room 1403), or via e-mail at info@erdc.ru.

The application will be decided upon within 15 working days. If the project meets all the necessary requirements, the application will be accepted. For the next stage in the process, the applicant must sign an agreement with the Far East Development Corporation to be able to carry out business activities, and will receive a certificate validating the status of a member of the ASEZ or FPV.

Criteria for evaluating the applications of potential FPV members:

-          absence of arrears in taxes and levies, bankruptcy proceedings, reorganization or liquidation.

-          information about the project; the main data, graphic plan of the project, source of income, needed resources and infrastructure;

Criteria for evaluating the applications of potential ASEZ members:

-          implementation of permitted work activity allowed by the ASEZ;

-          absence of arrears in taxes and levies, bankruptcy proceedings, reorganization or liquidation.

The pace of registration of companies to become members of the ASEZ and FPV is increasing. As of 25 August 2017, implementation agreements of 158 investment projects worth RUB 494.5 bn were signed with the members of ASEZ. The members of FPV finalized 284 investment agreements totalling RUB 321.8 bn.

These investment projects will be implemented at different times, up until 2025 and later. However, the numbers look impressive. For comparison: according to forecasts, the gross regional product of all regions of the Far Eastern Federal District in 2017 will be RUB 3.88 tn. Confirmed deals with members of the ASEZ and FPV will account for a total of 21% of the annual GRP of the federal district. 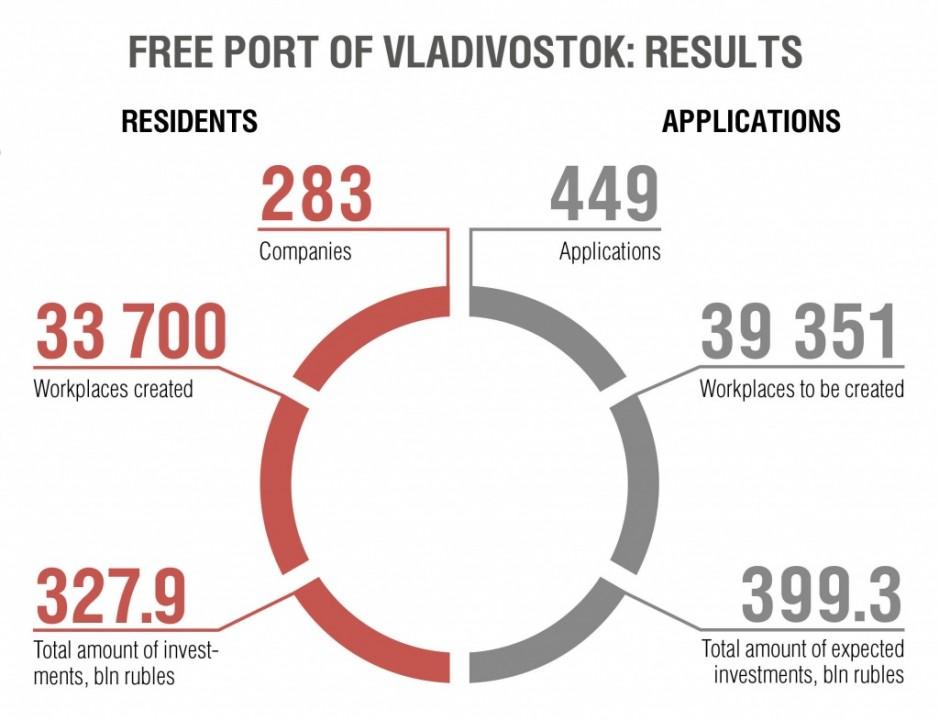 By linking the investment plans of many private and public companies with their obligations to build utility networks within the budget money, the government must now ensure 100% synchronization of the construction work at the sites of ASEZ. "Already we have almost finished the projects, and prepared all the required documents. Now, together with the regional governments we are building infrastructure facilities within all the ASEZ. Where the work began earlier, they are already approaching the final stages. Today we are mostly living at the construction site. We help the members with the construction and build our facilities throughout the Far East," says Denis Tikhonov, General Manager of the Far East Development Corporation.

According to him, the priority of the corporation's work remains the meeting of all obligations that are imposed by law. "We must ensure the unconditional implementation of all the projects announced by the members, and provide them with all the necessary help. We must complete the construction of the infrastructure facilities that are needed to launch new projects for members of the ASEZ. This is also a good attraction for the arrival of new investors," Tikhonov said.

Foreign investors have come to the Far East

The dynamics of the projects that have applied for member status of ASEZ and FPV confirms the growing interest from foreign investors and the efficiency of capital investments in the Far East. For example, there are three investors that are implementing projects involving Japanese investments. In the ASEZ of ‘Khabarovsk’, the company JGC Evergreen commissioned a greenhouse for growing vegetables. A similar project in the ASEZ ‘Kangalassy’ is implemented by the member company "Sayuri". In the FPV, a Japanese investment project, a coal terminal, is also being implemented.

Investors from the Republic of Korea have three projects in the FPV regime: LLC ‘Vostok-Polikor’ is creating a plant for the production of polyurethane and household chemicals; LLC ‘Urban Transport System’ is developing a system of electronic payment for travel in Vladivostok, and LLC ‘RosKor’ is organizing the production of small-piece formwork.

There are also members registered in the FPV with investments from the US and Mexico building a ranch, a tea packaging factory from a Singaporian company and an Indian KGK company setting up a diamond cutting factory.

"The company plans to launch a full production cycle with the purchase of raw materials and the creation of its own components and finished products. Now the products from our plant are sold across the whole Far East. In the near future, the company plans to enter the market of western Russia, and the markets of the countries of the Customs Union. In the long term, we plan to send 50% of our products to China and the Republic of Korea, " said the General Manger of LLC ‘Vostok-Polikor’, Khi Yong Yanakawa.

"The launch of a new enterprise in the Far East as a member of the FPV allows the use of the incentives for business development in the region and opens up great opportunities for the export of cut diamonds to the countries of the Asia-Pacific region," said Sandip Kothari, managing director of LLC ‘KGK Group’.