Kamchatka has caught Sevmorput by its tail

In August 2017, communication by the first in the history of peninsula regular international line for fish products delivery opened in Kamchatka; before that the local fish producers had to transship their products for further shipment to the export and domestic markets via Vladivostok. The project is implemented by subsidiary of NOREBO Group which became one of the first residents of the Free Port of Vladivostok in Kamchatka. 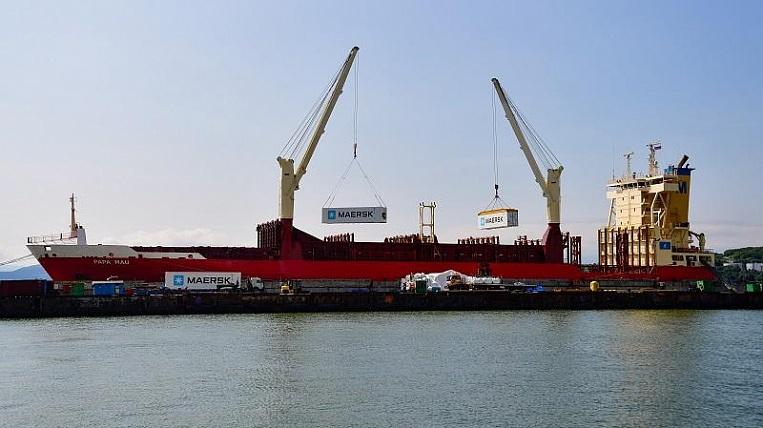 Фото: Фото: Юрий Смитюк / ТАСС
On August 7, PAPA MAU container ship moored to the quay of Seroglazka Terminal in Kamchatka; it was chartered by international transportation company MAERSK to bring three hundred empty 40-feet refrigerator containers for the fish products. Instead, the container ship collected almost two hundred containers with fresh products of Kamchatka enterprises and headed to Busan in South Korea. Thence, the fish will be delivered farther, to the consumers all over the world, including the Russian ones, by the southern sea route to St. Petersburg.

The site for handling the containers with fish products is being constructed by Terminal Seroglazka Company as a resident of the Free Port of Vladivostok obliged to invest 800 million rubles into development of Petropavlovsk-Kamchatsky Port. In the same place, the investor is constructing the new refrigerator with a storage capacity of 15 thousand tons of products at the same time, so that to increase the capacity up to 20 thousand tons. Over the past year, the terminal handled 16 thousand TEU (containers in the 20-feet equivalent units) and around 30 thousand tons of firsh products, says Vladimir Valter, General Director of the Terminal. The terminal plans for the year 2017 include increase of handling volumes by two times, in the longer-term perspective it is projected to increase the annual cargo turnover up to 800 thousand tons. Out of this quantity, not less than 300-350 thousand tons should be fish products.

These plans are gradually transforming Seroglazka into a logistics project which Kamchatka fish industry has been missing for long. LLC Terminal Seroglazka has got these terminals under trust management from JSC Fish Catching Enterprise Akros. Both Akros and Terminal Seroglazka belong to JSC Norebo Holding. NOREBO Group under control of Vladimir Orlov, the Russian entrepreneur, owns totally around 15% of the Russian quotes for catching pollack, cod and herring.

The Krai power authorities are interested in the fish container handling development, and not only for the local fish producers. "Kamchatka possesses certain volumes for biological resources production: currently it is about 1 million tons a year, and we are catching around 850 thousand tons of fish. Of course, we would like fish producers of other regions operating in Okhotsk Sea and Bering Sea expeditions, to handle cargo here. We are interested in our handling volumes growth," says the head of the region.

He emphasized that entrepreneurs of Kamchatka used to complain very often about the handling problems in August and September in the port of Vladivostok. "In addition to that, delivery by railway was also a problem very often: the trains with refrigeration wagons are not always formed in due time. The problems were always out there. Now our fishermen are able to avoid these problems due to operation of two partners, MAERSK and the terminal," believes Vladimir Ilyukhin.

"Probably it is still too early to speak about the shipment line now, since it was a trial entrance of the ship. We are expecting that MAERSK will be making such direct entries once in two months. The question is only in the volumes: MAERSK is ready to enter even every week," notes Vladimir Valter. According to his estimation, the main target for each fish producing company is maximum reduction of period for their products to stay in the port. "Now it takes four days for the ship to arrive to Vladivostok, plus a couple of days of handling there, and this is the best scenario. As for our project, it assumes that the ship in five days will be in Busan already," he says.

The appearance of complex in Kamchatka able to accept fish products from the fishermen and stuff containers for further handling of cargo, shall result in growth of the total region's cargo turnover, believes Vladimir Valter. "Those fishermen that are now sending their catch for handling in Asia, will be able to do it here. The companies at the Russian Far East catch up to 2 million tons of fish a year. I believe we can fight for a part of these volumes. And the prices on our services will be better than in the foreign ports," he thinks. Terminal Seroglazka is ready to work with cargo transportation along Sevmorput as well, he adds, but a specific transportation scheme depends on the carriers themselves.

"Historically, very small volumes of fish were delivered directly from Kamchatka to the external markets: it's just that we did not have this kind of service. Fish products were mainly shipped to Vladivostok, and for further export, to China and South Korea. There the fish products are reloaded to refrigerators, put into containers in the same manner and shipped by suppliers all over the world, and to Europe, and to America as well. We are now planning to offer an alternative. Last year we already started to ship from our terminal on export, for instance, to Germany, Japan, America, the Netherlands, and also to St. Petersburg by sea route," explains Vladimir Valter.

It should be noted here that plans of Terminal Seroglazka are only a part of general work for development of transit container transportation in Kamchatka. However, development of this industry in hindered by the fact that there are almost no vacant land pieces left in the coastal area of Petropavlovsk-Kamchatsky. "Still, the interest to the industry is now big enough: within the frames of all port facilities development, out target is to reach 8 million tons of cargo handling a year. At the moment, our handling is limited by 1.5 million tons a year. Our base for development is huge. Kamchatka is becoming a new point of growth in logistics," he says. "Discussion of the project for liquefied natural gas handling terminal has started recently with NOVATEK Company. In case of Seroglazka terminal, we are talking not only about fish products handling, but about complex servicing of ships as well. I believe that the time has come when it is necessary to develop ports in Kamchatka, and these are only the first steps we are making," adds Vladimir Ilyukhin.
Теги: Kamchatka Sevmorput EEF Far East