Despite the fact that Magadan oblast, due to its northern location, has a more severe climate compared to other regions of the Far East, it is in fact poised for excellent growth in the near future. 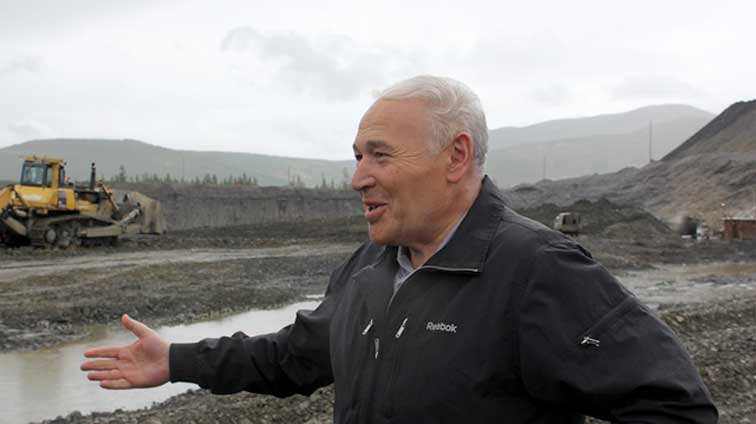 Vladimir Pecheniy, The Head of the region, shared with EastRussia what is going to be the hallmark of the Magadan region’s projects at the upcoming East Economic Forum, and also described the region’s current situation before the Forum’s start.

– Everyone remembered Magadan oblast from the unique collection of nuggets it presented at the Far East show during East Economic Forum 2015. What will be the signature moment of the region’s exhibition this year?

– The region will once again display its collection of nuggets, but in addition we are also bringing in another exhibit that tells the story of the unique culture of indigenous peoples of Magadan oblast: the Evens and Koryak. When it comes to signature moment, the region is planning to show an art object called Gold Field. Every visitor will be able to experience what it’s like to be a gold miner.  This impression will be specifically achieved by the elements from the everyday life and work of miners in the field demonstrated at the art installation. Moreover, the needed impression will be augmented by a field tent, a campfire site with a cauldron, and tools used by mine surveyors, geologists and mining engineers. At the same time, the right effect will be achieved by the opportunity for attendees to take gold-bearing sand and try to pan for gold under the supervision of an experienced miner. In fact, visitors of the installation will be invited to take a journey to the very beginning of the 20th century, as that is when gold was mined using a wooden pan, a pick axe, a scraper and drying jars that are now exhibited at the installation.

We will also offer a unique chance to visit our third All-Russian Gold Festival entitled Prospector’s Luck. Conceptually it is a journey to the past with even deeper immersion in the time period so everyone can try on the role of an artisan prospector and experience the atmosphere of the Kolyma Klondike. Every attendee at the festival has a chance to strike real gold, and the winner becomes an instant millionaire: in just 15 minutes panning gold, the winner of the competition receives one million rubles. That’s the first place prize money offered by the Prospector Luck Festival.

– What is the current economic situation in Magadan oblast?

– The main features of the economy of Magadan oblast in 2016 are the decline of inflation, restoration of positive dynamics in the goods and services market, and the growth of volumes for shipped products in the major economic sectors. Moreover, the region is expected to have a prolific flushing season.

The overall situation on the international market has improved in comparison to 2015, but it is still not the same as it was the years preceding the sanctions against Russia. For instance, in Q1 2016 foreign trade turnover increased by 15% and totaled 99 million USD. One of the beneficial developments of recent years in foreign trade is that now Russia has a new export partner in Kazakhstan, which accounted for 49% of total foreign trade turnover last year.

Companies are also showing sturdy financial results: in January-April 2016 the region’s economy registered a gross profit of 3 billion rubles, which is twice larger than the same period last year.

– What other industries in the Magadan region are the most interesting for investors today?

– When talking about investment, one should first state its current level in Magadan oblast and its prospects for the future. What I mean is that in the first quarter of this year the economy of Magadan oblast received 5 billion rubles of investment, and our general projection for the year is that the volume of investment in current prices will grow by 2.6% compared to 2015. As for industries, most appealing for investors, the international investment trade fair recently held in Magadan showed that investors are now mainly interested in projects related to mining, agriculture and tourism. This is not at all surprising. We really have something to offer in these areas for investors. Projects with the highest levels of priority possible will be showcased at the EEF.

The production index in Kolyma has the ability to increase from 6% in 2016 to 11% in 2018. This will be largely determined by the tendencies active in the region. For instance, one positive trend can be observed in Magadan’s main industry, gold-mining: the planned volume of gold ore production in 2016 has exceeded the 2015’s level and is expected to total 27 tons. At the same time, regional authorities are also making sincere efforts to develop touristic sector, which traditionally has been an unconventional industry for Magadan.

It should be pointed out that even though the soil of the Magadan region is not known for its high natural fertility (much of it has been put to agricultural use as the result of land amelioration), the area is rich in minerals. For example, the region has significant stocks of precious, non-ferrous and rare metals such as gold, silver, tin and tungsten. There are also explored deposits of copper, molybdenum, polymetallic ores and ornamental stone. In addition, there are also oil, peat, wood, and gas condensate reserves. The second most important sector in Magadan oblast after mining, and the only one that not only sells its products in the domestic market of Russia, but also exports them, is the fishing industry. At the same time, the region has all the necessary resources to develop all types of tourism, from fishing, hunting and eco-tourism, to educational tourism. The interest of regional authorities in its comprehensive development is put clearly on display by the fact that at the upcoming 2nd East Economic Forum at the beginning of September, the region will present both its touristic and resource projects. On the whole, the region will showcase four projects.

Construction of the mining and metallurgical complex on the basis of the Pavlik, Pavlik-2 and Rodionovskoye gold ore fields

This project involves the creation of a mining and metallurgical complex on the most promising fields of the Yano-Kolyma gold-mining province. When put into operation, the project will ensure the production of up to 5 million tons of ore and 6 to 8 tons of gold annually. The sponsor of the project is ZRK (gold-mining complex) Pavlik LLC (part of the Arlan investment company), and the volume of necessary investment is 45.6 billion rubles. Currently, the start-up and commissioning works at the complex are coming to a close.

In addition to this project, the region is planning to support other endeavors of ZRK Pavlik at the east Economic Forum, as well as further development of the mineral resource base of the Pavlik and Pavlik-2 deposits. This will lead to a total increase in reserves up to 250 tons, which can be significantly expanded by the expected reserves of 100 tons from the Rodionovskoye deposit. In general, in the long run these three fields are expected to produce up to 18.5 tons of gold annually.

Creation of a coal cluster

This project provides for the construction and development of coal mines near Omsukchan village with a total capacity of more than 3 million tons of coal annually, the design and construction of the export coal terminal in Pestraya Dresva bay, the construction of a motorway of about 130 km long from the town of Galimiy in Magadan oblast to Pestraya Dresva bay, and the reconstruction of the Omsukchan-Galimiy road section.  Open-pit coal mines explored as part of the project contain over 100 million tons of reserves with prospects for further growth. About 1 billion rubles has already been invested into exploration works. High-quality products from here may be purchased by steel and ferroalloy enterprises from the Asia-Pacific Region (South Korea, Japan, China, Taiwan, and Vietnam).

The project is headed by Severo-Vostochnaya Ugolnaya Kompania PJSC (North-East Coal Company) (part of Vostochnaya Gornorudnaya Kompania [Eastern Mining Company] group). To develop the complex for the production and handling of metallurgical coal, 25 billion rubles are required. One of the forms of participation offered by the project is the possibility of contributing to the share capital of the company uniting the production assets of Sakhalin and the exploration facilities of Magadan oblast.

Reconstruction of the Talaya spa resort

This project involves the renovation of the Talaya spa resort and the construction of a fitness center, bowling facility and water park, as well as building a high voltage 220 kV power line to Talaya village and reconstructing the motorway leading to it. The main advantages of this resort include local waters and mud that contain rare medicinal properties that activate metabolic processes in the human body and promote cell regeneration. The Talaya resort is the only spa facility in the northeast of Russia. Every year it is visited by about four thousand people, including local residents and people from neighboring regions. The resort is located at an altitude of 720 meters above sea level and surrounded by high hills with picturesque dense pine forest. One special feature of Talaya is that it enjoys a unique number of sunny days every year. The annual amount of sunshine here reaches 1,822 hours, which is even more than at Caucasian resorts.

The renovation of the Talaya spa resort was initiated by the Government of Magadan oblast. The project requires 8.6 billion rubles of investment.

Construction of the Solnechny. Magadan, an all-season sports and touristic complex

The project includes a hotel and entertainment complex, shopping, recreational facilities and a conference room. As part of this project there are plans to build a gondola lift, create ski and bike trails of varying complexity, make cableways and develop ski and hiking trails. An indoor observation platform will call the very top of the snow-capped mountains home, and it will provide excellent views of the surroundings of Magadan and Nagaev bay. The project also involves building a ski center, snowboard park, ski stadium, cafes, sports and children’s facilities with gyms, a wellness center, swimming pool, skating rink and bowling facility. The whole complex will occupy 1,000 acres on the grounds of the Russian ski school. The project is expected to increase tourist flows — both Russian and foreign — by 13.8 thousand people per year.

The Solnechny. Magadan project was initiated by the Municipality of Magadan. It requires around 2.6 billion rubles of investment. The master plan for the project is currently being drafted.