Roads Undermine the Development of Tourism in Kamchatka

Comfortable transfers are one of the principal components of the tourism sector. A trip starts with a bus ride and the road to a hotel or a sightseeing spot. There is a lack of new, comfortable buses in Kamchatka. Business owner, Oleg Pushayev, is the leader of this market. He told us about the conditions of the transport infrastructure on the peninsula, as well as the typical features and difficulties of working in the tourist transportation sector 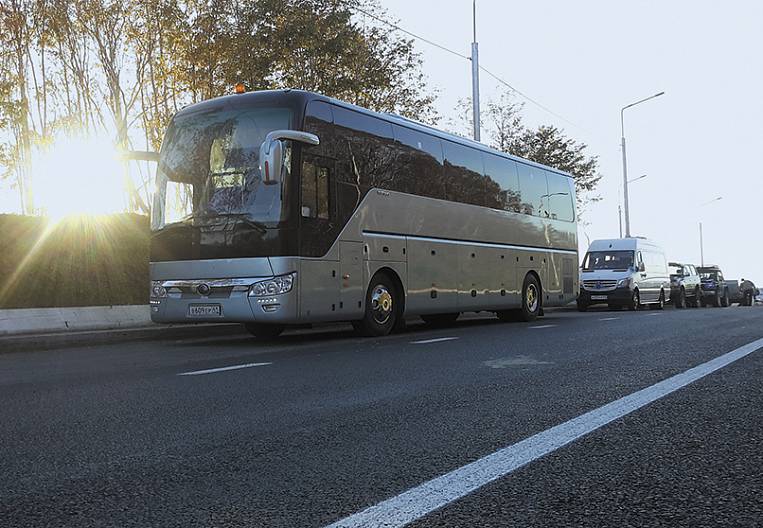 – Why have you decided to work with logistics in the tourism sector?
– About 18 years ago one of the Kamchatka tour companies that didn't have its own transportation started working with me as a carrier. I used to drive tourists around in a Hiace minibus. I was hired because my minibus was newer and had a better cross-country capacity than others. The business was steadily growing and developing along with urban and suburban passenger transportation. I continue to work for them even now because transporting tourists is only one part of the business. Tourist traffic is only intensive in August and early September; there are only sporadic orders throughout the rest of the year.

– How much has your vehicle park grown since then?
– At present, I have a sufficient number of tour buses. About five years ago, I was the first to buy several tourist-class Mercedes vehicles. WE only use them for tourism; we do not use them on urban routes. Now, I have four of these buses. We have buses with 33, 41 and 44 seats but they are also used on urban and suburban routes. Kamchatka's greatest problem is that there are practically no large tour buses that are used exclusively for tourist groups. Regular transport companies mostly work in tourism during the peak season and when cruise liners arrive.

– What do you believe to be your greatest achievement in your career?
– This year, I purchased a large, 51-seat bus made in China. It is brand new, manufactured in 2018. It is a tourist-class bus; like the ones used in Moscow, St. Petersburg and in a few other major cities. There is only one such bus in Kamchatka. Naturally, there are few orders for it but I purchased it because I felt there was a need to change something in the sector, and offer my cooperation to more tour companies. I decided to be at the forefront. During peak season this year, a lot of companies placed orders for the bus. It offers a completely different service level. The Kamchatka Territory Agency for Investments and Support of Entrepreneurship helped me buy the vehicle. With the delivery to the peninsula and GLONASS installation, the bus cost me almost RUB 10 m. The Agency made the first lease payment — RUB 3 m. It was significant support. Naturally, it is not enough to develop the transportation infrastructure. So far, I am the only one to have used this support measure; other companies are not prepared to make purchases: the rate of return on vehicles is more than seven years. If the territorial government adopted a programme for the development of tourist transportation, it would be excellent support for many transport companies.

–What can you boast of beyond the purchase of vehicles?
– Most tour companies work with me; they value the new fleet that is not used on routes within the city. Most road transfers are entrusted to me. While 18 years ago I only collaborated with a single tour company, there are now about 15 of them. You must remember the issue of personnel as well — we have to instruct the drivers, monitor their dress code and behaviour. I have several drivers who have been working for me for 5–10 years, they know the routes and the guides. These are relations that have been gradually built up over the years and I value them.


– What problems and challenges do you have to face in your work?
– One of the problems is the short tourist season. The transport I have is in only demand for a month or month and a half a year. But the main problem lies in the access roads to popular sights and tourist attractions. Even the airport is ill-suited for large buses. Tourists have to wait for the entire group to gather; then only after all of them have gathered near the airport, the bus has to push through a huge number of private vehicles. Another issue: there are no roads leading to every tourist sightseeing spot, the ocean, for example. Tree branches overhang the road and there are a lot of potholes and bumps. New, lower cars cannot drive there. The road was graded once this year — to prepare for the arrival of Dmitry Medvedev. In just two days, the road was in better condition than it had ever been in before: the road was expanded, potholes filled, but after the prime minister left, it was forgotten again. There are no suitable lots to park or turn buses at the camping grounds. We would love it if the authorities responsible for roads would create access ways to tourist sights — it is in everyone's interests. So far though, tour companies are forced to hire SUVs and all-terrain buses but they can't offer the right level of service.

– What are the priority objectives that you set for yourself in terms of business development?
– My top priority task is upgrading my fleet. This is linked to tourist comfort but mostly their safety: the newer the car is, the better its safety system. New buses are easier to maneuver, they are more reliable. Naturally, this requires considerable investments but we must focus on this area. After all, we are creating Kamchatka's image, and the transportation and logistics component is very important because we are the first contact tourists have with the local services, we're the ones taking them to all the interesting places. I also have another objective — to enter into collaboration with other tour companies. Competition is as fierce as ever, we understand that we have to be ahead of other companies.

– How, in your opinion, are the logistics and transportation infrastructure developing in Kamchatka? Are there any improvements, what are the prospects?
– Ten years ago, the roads were much worse. We used to travel on certain routes where potholes would cause the buses' shock absorbers to break from time to time. Now, the roads are better but nothing has changed when it comes to access roads: even if new tourist businesses and sights open, there are no good roads to them (there are no roads leading to rivers, no turning circles). Large buses cannot even reach the pier on the Bogorodskoye Lake. I don't know whose responsibility it is to make these access roads but I believe this infrastructure needs to be developed by tour companies and territorial authorities because companies cannot do this on their own. I cannot confidently say that the infrastructure being developed but I hope that this will change.
Теги: Kamchatka tourism
Читайте также:
string(22) "Стандартный"