The Russian Far East passes from extraction to refinery

5% of all Russian volume of oil and gas accrue to the Far East. Although the proximity to the Asia-Pasific countries makes the region’s role in the oil and gas sector of Russia a key one. In order to transport oil to Asia, a unique Eastern Siberia-Pacific Ocean pipeline. It is over 4 thousand km long, its projected pass-through capacity is 80 million tons of oil per year. Final destination of the pipeline is an oil port in Kozmino bay through which 31.8 million tons of oil were exported in 2016. 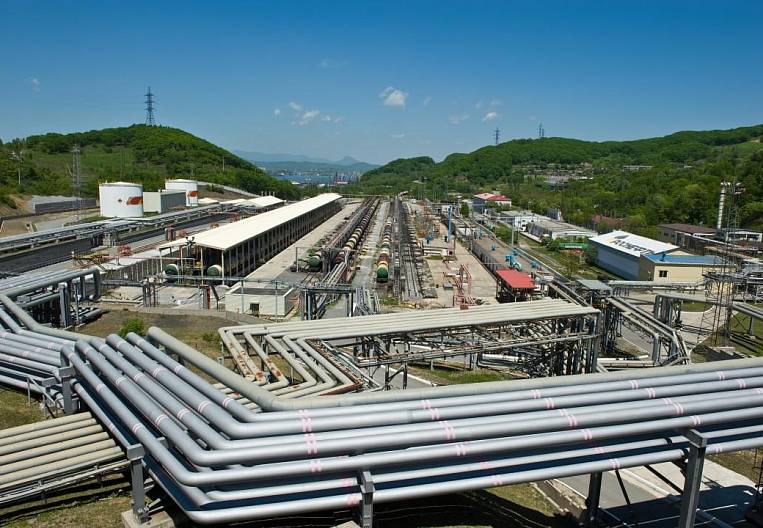 In 2017, construction of a second branch of Mohe-Daqing pipeline between Russia and China was completed. Its launch will enable to deliver gas directly by the pipeline, without the port in Kozmino. The major new transport project is the Power of Siberia gaspipe.  800 km of its linear part have been constructed. These projects make the Far East one of the leading Russian exporter of energy resources.

In recent years oil and gas production volumes have been stably growing as well. In compared with other regions of Russia, the Far East has two competitive advantages. The first one is that only here liquefied natural gas is produced. Second, the region is the main Russian center for  shelf oil and gas extraction. The biggest fields that are being developed are concentrated at the shelf of Sakhalin region where such projects as Sakhalin-1, Sakhalin-2 and Sakhalin-3 are implemented. According to the results of 2016, here 29.6 billion of cubic meters of gas and 18.3 million of oil were produced; that is 7.2%  more than in 2015. Development of the  Sea of Okhotsk shelf and the Arctic shelf is considered as a promising direction.

Key role in the oil and gas complex development in Russia is played by Rosneft. Its contribution into the GDP of the Eastern Siberia and the Russian Far East reaches 25%. Over 35% of total company’s investment volume accrue to the Far East.  And investments planned to the nearest years are to increase the company’s contribution of the regional GDP growth upto 50%.

Rosneft carries out a geological exploration at the Eastern Arctic and Far Eastern shelves. Their resource capacity is huge: 12 billion tons of oil and condensates and 11 trillion cubic meters of gas. Totally, at the east of Russia Rosneft possesses licenses for 113 plots. Their common hydrocarbons reserve comprises 3.3 billion of tons in oil equivalent.

In last 10 years Rosneft discovered 13 fields and 167 deposits of hydrocarbons at the east of Russia; their total reserve is estimated as 2.4 billion tons of oil equivalent. Even within the sanctions Rosneft carries out geological exploration works in full volume include such expensive works as seismic explorations and exploratory drilling. Thus, last year for the first time in the history of Russian shelf exploration, Rosneft made a large-scale exploration in the Sea of Okhotsk. It was 100% efficient.

In 2017, investment into geological exploration at the mainland of the Eastern Siberia and the Far East are to comprise 17.2 billion rubles. Also, it is planned to make a large-scale exploration in the northern part of the Sea of Japan. The works will be carried out at the Central-Tatar sector of the sea. Its area is 30 thousand square meters, forecasted resources volume is 270 million tons of oil and 322 billion cubic meters of gas. Seismic exploration enables to determine promising plots and scout drilling was made. Totally, together with shelf works, the company wants to invest 253.6 billion rubles  into local geological exploration by 2021.

Today Rosneft produces every second cubic meter of oil and gas at the Russian Far East. In 2016, extraction volume of the company exceeded 40 million tons of oil equivalent. The flagship project of Rosneft at the Far East is Sakhalin-1. Since its implementation 92 million tons of oil and 21.9 billion cubic meters  of gas were extracted. Several world records were made:  9 of 10 the longest wellsites of the world were drilled at Сахалине-1. The government gets a great profit from this project. According to the company’s estimations, revenues from Sakhalin-1 to the RF budget are to comprise 6 trillion rubles by 2050.

In order to monetize the gas that is extracted at the shelf deposits of the Far East Rosneft plans to build a plant for liquefied natural gas production. The Far Eastern LNG will provide no less than 5 billion tons of final production per year.

The key project at the mainland the eastern part of Russia is Taas-Yryakh Neftegazodobycha complex; it is located at the Republic of Sakha (Yakutia). Initial extracted reserves are estimated as 166 million of tons of oil and condensates, over  180 billion cubic meters of gas. It is planned at by 2021 upto 5 million tons of oil per year will be produced here. That is why Rosneft creates an energy cluster with participation of leading international investors in Yakutia. The British BP was followed by an Indian consortium of investors consisting of Indian Oil, Oil India and Bharat Petroresources companies.

Generally, by 2020 Rosneft plans to extend its total volume of hydrocarbons production  upto 315 million of oil equivalent. The greatest production growth is expected at the east of the country.

Today, the Far East lacks oil refinery enterprises. Almost half of all oil products have to be transported from other regions. That is why Rosneft is actively investing into oil refinery. Over 60% of total oil refinery capacities at the Far East were built by Rosneft.

The major asset of the company at this region is a high tech Komsomolsky Oil Refinery Plant. Its products are in at demand at the east of Russia, as well as at the export markets of Asia-Pacific countries. The plant produced engine oils of Euro 5, the highest emission standard, DMF, the eco-friendly marine fuel. In nearest years, the enterprise will be modernized, after that refinery depth will be over 90%. By 2021 over 30 billion rubles will be invested into industrial capacities development.

In 2012, Rosneft built a fueling complex at Knevichi airport in Vladivostok; it became the biggest one in regions of Russia for the last 30 years. 3.5 billion rubles were invested into its construction. In  2016, into plane fueling volume reached 103.6 thousand tons per year.

For Rosneft investments into infrastructural products at the Far East mean an exit to fast growing markets of the Asia-Pacific countries.  Warm water ports at the south of the region are able to work all year round. Thus,  Nakhodkinsky Sea Terminal built by the company enables to ship 7.5 million tons of oil products per year. In 2016, Rosneft exported 15.5 billion tons of oil products to the Asia-Pacific countries markets ; this is 15% more that in 2015. And in upcoming years Rosneft plans to implement two other large-scale projects at the Far East.

The first one is to create the biggest Russian oil refinery and petrochemical complex of the Eastern Pertochemical Company.  The preliminary sum of investments including those into infrastructure is to comprise about 800 billion rubles. Some part of financing will be provided by a foreign investor: in July, 2016, Rosneft signed a cooperation agreement with ChemChina. The construction of the complex will create about 50 thousand jobs for skilled workers.

The second project is implemented under the instruction of the Russian President. Rosneft forms a unique shipbuilding cluster at the base of the Far Eastern Shipbuilding and Repairing Center. Zvezda Plant will be its core; this is the first Russian shipyard for large capacity shipbuilding. A new shipbuilding complex will provide vessels with tonnage upto 350 thousand tons, sea platforms elements, ice-class vessels, offshore and other marine facilities. Anchor order of Rosneft will be upto 70 units of new marine facilities and vessels.